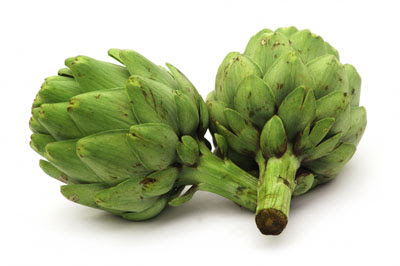 So this is pretty fascinating. Barigoule once referred to a specific Provençal variety of woodland mushroom. French peasants would stuff fresh artichokes with the barigoules and then braise them in a white wine thyme broth finished with lemon for a bit of tartness. Over time the dish evolved to artichoke hearts braised alongside barigoules along with other vegetables such as onion, carrot, etc. Eventually barigoules fell entirely out of favor and Barigoule came to simply mean a thyme and vegetable braise where the vegetables may vary (except for the artichokes- you must always have artichokes in your Barigoule!) as does the broth (wine, vegetable, or chicken broth).

Bon Appetit provided a new twist on the classic in this month’s issue with a Barigoule recipe substituting broccoli for artichokes and featuring the addition of vanilla. Thou shall not take away my beloved artichokes! Accordingly, when I made this for dinner tonight I used artichokes (4 of them) that I hand trimmed instead of broccoli. I also improved upon the magazine recipe by grilling the asparagus and onion briefly over a hot fire before adding to the braise for a greater depth of flavor (their method is to blanch the vegetables before adding to the braise). Finally, I added parsnips to the vegetable medley and a tablespoon of butter for richness. My changes are reflected in the recipe below. It’s a perfect Lenten meal (for those abstaining from meat on Fridays) or an everyday lovely choice for vegetarians (substitute vegetable broth for the chicken broth for strict vegetarians and omit butter for vegans).  Enjoy!

Serves 6 as a main course