After I reviewed Railroad Rivals , the publisher (Forbidden Games) sent me Raccoon Tycoon to evaluate. It’s by the same designer, Glenn Drover. He’s an award winning, well known designer credited with the creation of more than 25 different board games. I’ve only ever played one other game of his (Railroad Rivals) so I’m not sure if it’s the case across all his games, but there’s definitely a similarity in creative style evident in these two games. Like Railroad Rivals, Raccoon Tycoon is a mid-weight strategy game that can be played in under 90 minutes, featuring elements of auction/bidding, set collection, and price speculation.

In Raccoon Tycoon, players take on the role of capitalists building businesses, towns, and railroads, financed by speculative production and selling of commodities. This all takes place in a land populated by adorable anthropomorphic animals -raccoons, skunks, cats, and dogs, just to name a few. One thing I wondered during play was whether we were also animals in this story. I assume so, and in that case, it would have been extra awesome if identity cards giving each player an animal persona and backstory were included in the components. Identity cards would help reinforce the theme and pull players deeper into the story. An idea for an expansion perhaps, with differing special powers granted to each persona?

Over a series of rounds, players take turns completing actions, until either all the railroads or towns are sold, which marks the last round of the game. At that point, play continues until each player finishes the current round and victory points from railroads, towns, buildings, and building bonuses are tallied to determine the winner (victory points from mission objectives are tallied at this time if playing with the Kickstarter exclusive expansion). 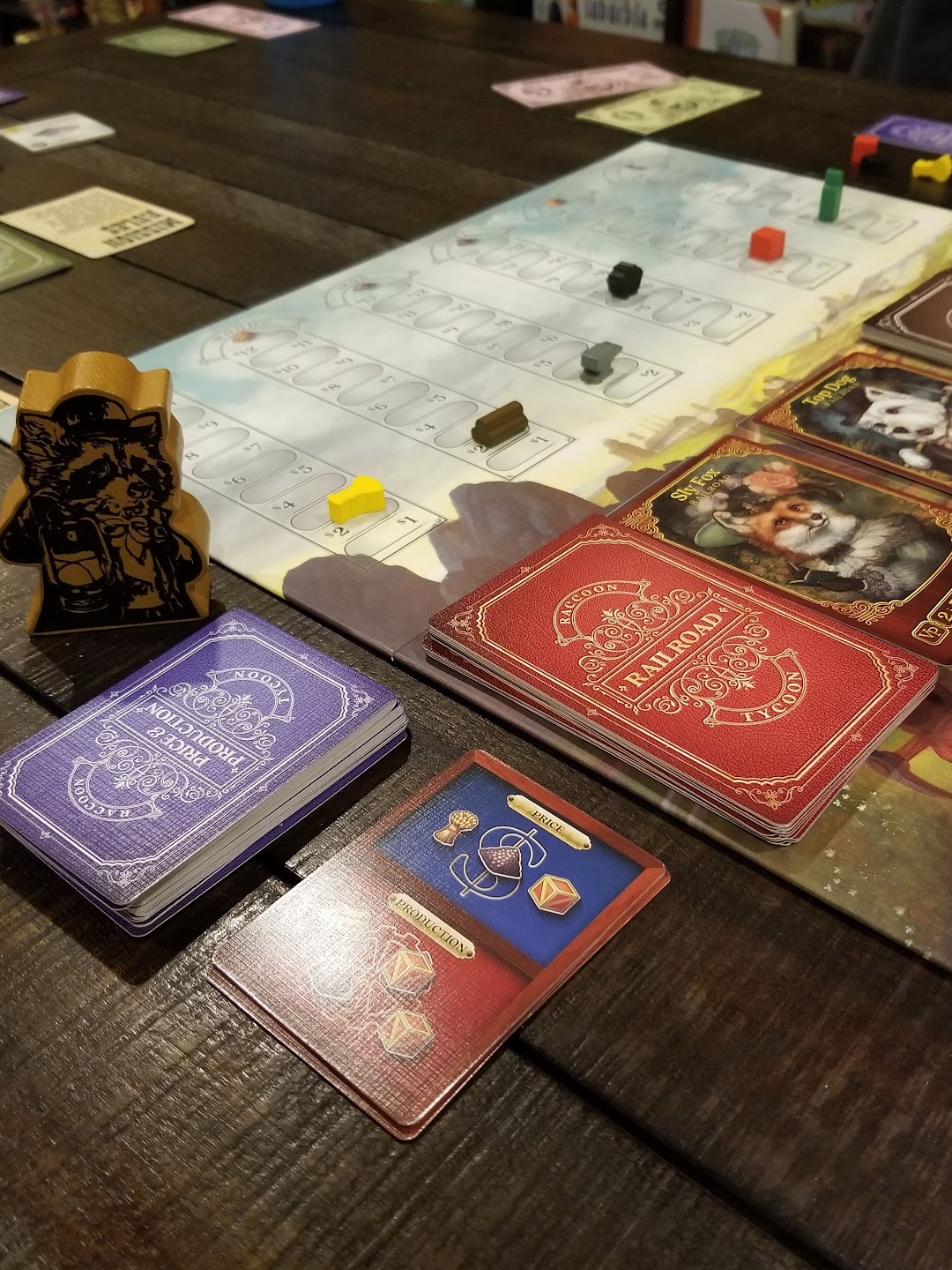 Drover shows restraint in the action options available to players; there are only five possible choices on a turn. Players can produce various commodities and raise commodity prices (as directed by the price/production cards in their hand), sell a self-selected quantity of a commodity to reap the financial reward, start a bidding war to buy shares in one of the railroad companies, purchase a building (a business), or purchase a new town. Sometimes the action selection is limited by one’s financial resources – if you don’t have enough money to buy anything you’re going to need to produce or sell. Other times your options are wide open (these are the moments when a bit of analysis paralysis can creep in) and you’ll need to make careful decisions to optimize your economic fortunes. Strategy tips we’ve learned along the way:

The artwork for Raccoon Tycoon is provided by Jacoby O’Connor and Annie Stegg. It’s quite nice; there’s a Thomas Kinkade kind of feel to the railroad and town card illustrations, while the box cover art is reminiscent of folk art. 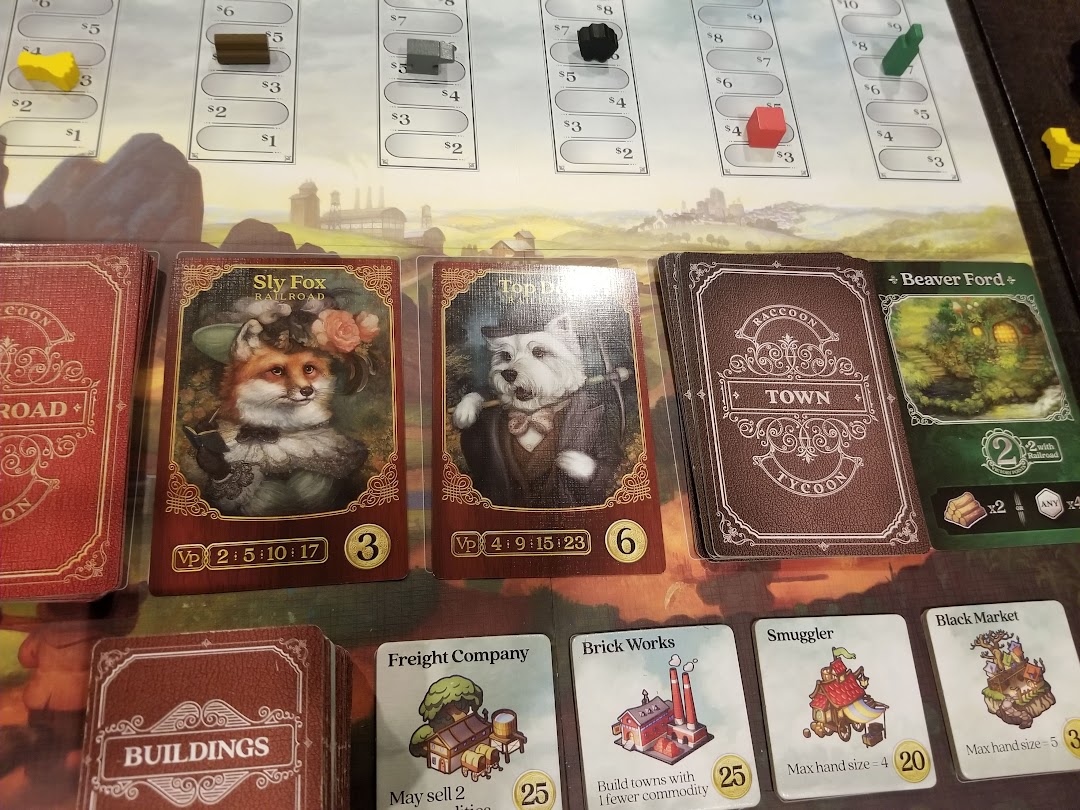 The components for Raccoon Tycoon are well made. This seems to be a hallmark of the publisher, Forbidden Games. There are thick cardboard tiles (buildings), plastic coated cards (railroad, town, price/production cards, and mission cards), wooden tokens (commodities), plastic coated paper money, a giant artsy wooden raccoon (start player token), the rule book, and the main game board. 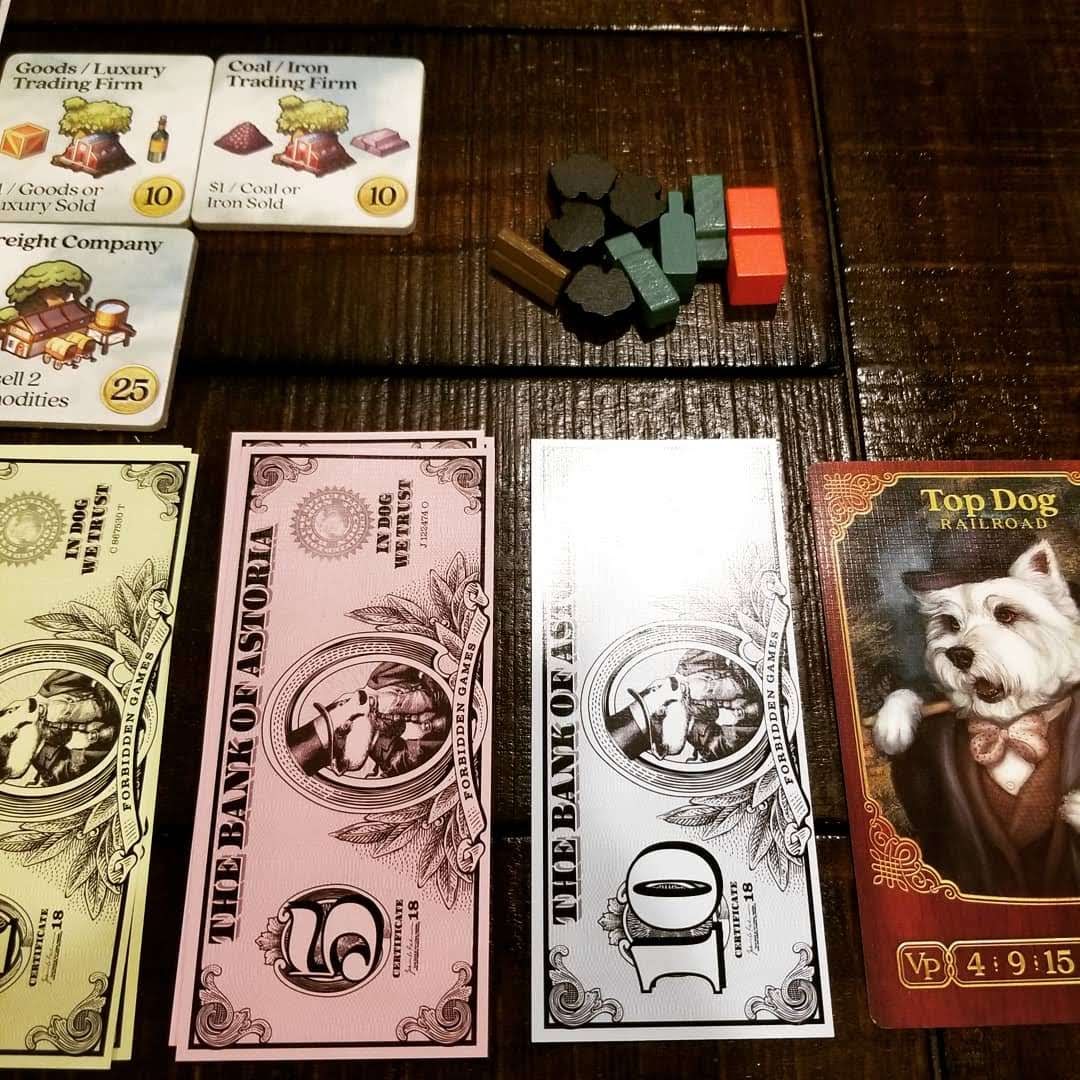 I want to especially call attention to the plastic-coated paper money because it’s a brilliant way to provide economic resources that approach the quality and enjoyment of metal or clay coins, but at a fraction of the cost. Kudos to the design team member who made that decision. The only deficiency in the components is the lack of player aids. This is a problem with many games published today so I don’t want to beat up too much on Forbidden Games specifically, but it’s just so frustrating. They’re such a valuable item to offer players and they don’t add much to the cost of production, so I don’t understand why so many times player aids are not included. To get us through our first game, I photocopied the action choices from the bottom of page 6 in the rulebook and handed out the sheets to each player.

Lately, I’ve been playing a lot of games with people outside of my core game group. I volunteer at a local youth center playing games with teens once a month, I play with relatives who visit from out of town, and my husband and I bring games on work or personal travel to play with people we meet. There’s a strong demand in such situations for games that can be taught and learned easily but are complex enough in strategy to keep myself (or any other advanced gamers who end up in the mix) engaged. Raccoon Tycoon meets that demand. It’s fun, it’s clever, it’s adorable in its theme and artwork, and it can be played in a reasonable amount of time; a great choice for an addition to any game library.