I was so excited when Jamey Stegmaier’s Plans and Ploys  expansion for Tapestry  (published by Stonemaier Games) showed up in the mail. 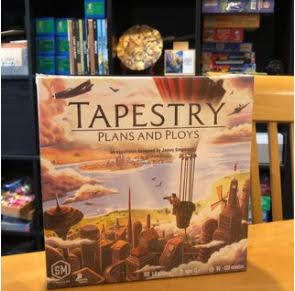 I’d  played a lot of Tapestry games with my social isolation pod (see my review for Tapestry  here) over the summer and I was eager to explore the new Tapestry cards and civilizations promised in the expansion. Beyond these updates, the Plans and Ploys expansion also includes a new game element (Landmark cards), new space tiles, a handy bag for drawing exploration tiles, and landmark place marker tokens which offer an easy way to identify which landmarks have already been claimed just by looking at the central board.

As soon as we unboxed Plans and Ploys, we invited a few of our friends over to give it a go. 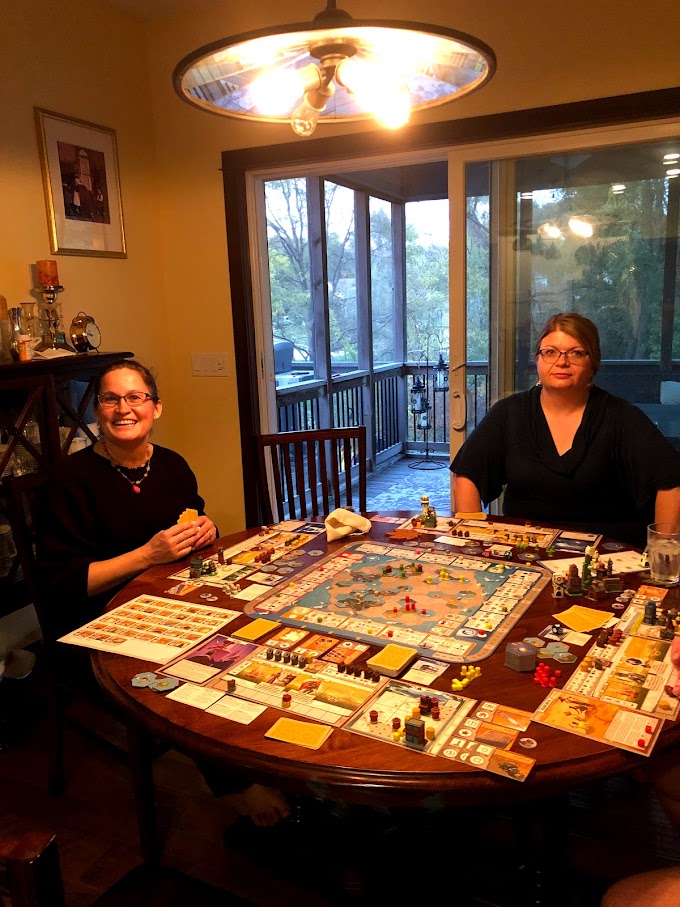 Our previous social isolation pod had disbanded with the spike in new COVID cases in our state (Iowa: ground zero for the pandemic once the fall semester of school started) and none of the members of our newly formed pod had ever played the base game before. So we weren’t sure whether we should play the base game without the expansion first or if the expansion was straightforward enough to merge into the base game in a way that didn’t prove too complicated for new players to understand. We spent a bit of time going over the base game rules with our friends and then read the rules addendum for the expansion together and decided to jump straight into playing with the expansion. It was a good decision. Everyone got into the flow of the game without any difficulty. 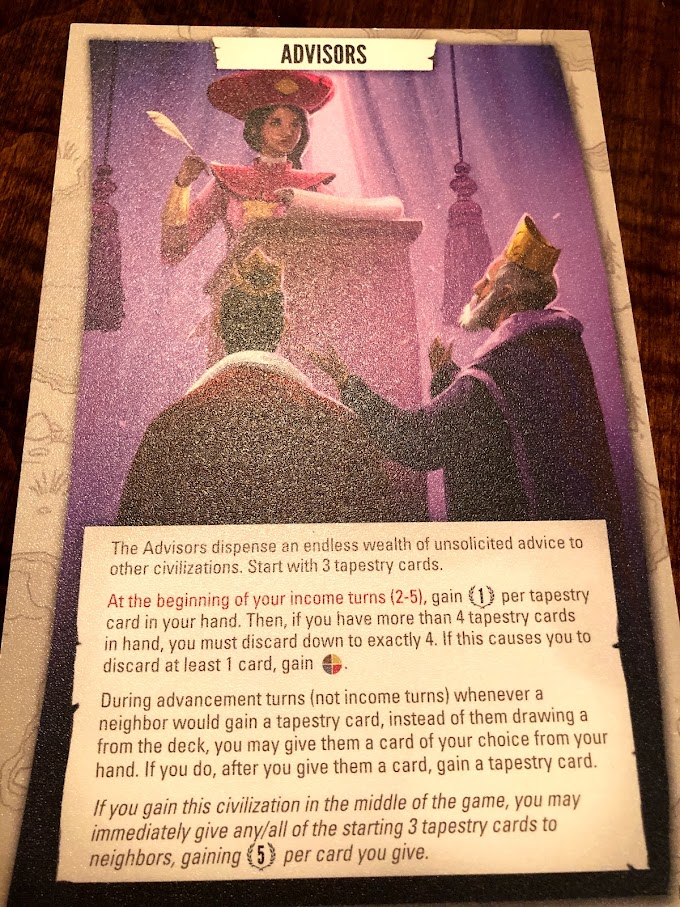 I played the Advisors civilization. This is a new civ from the expansion and I wasn’t sure if I was in love with its special abilities as compared to the other new civs I’d peeked at before we shuffled all the civs and randomly drew for each player.  One point per Tapestry card didn’t seem to amount to much, and at first I didn’t see the power in forcing others to take my Tapestry cards instead of drawing from the deck. But as the game unfolded, I quickly realized that I could use the giveaway power to purge less helpful Tapestry cards from my hand and churn through the Tapestry deck much quicker in search of the really powerful cards. Plus, I could influence my opponents’ behavior by giving them Tapestry cards that would encourage them to favor certain actions over others and then use the knowledge of what they were likely going to do for my benefit. For example, I might give someone a Tapestry card that strongly encouraged military track advancement and then play a Tapestry card myself that allowed me to pick an opponent and a track and copy the opponents movement on that track. Knowing that a specific opponent would likely play heavy on the military track for their next several turns allowed me to be more confident in my bet on that player and that track in conjunction with the track+opponent copy power of my Tapestry card.  Overall, the Advisors are well balanced and constructed civilization, as are all the others from the expansion that I’ve studied closely.

At the beginning of the game, each player was given a Landmark card and building. These are personal goals that allow a player to place a building on their Capital city map once the goal is met. All of the goals are fairly straightforward, but as with other games that feature personal player goals, players have to be careful not to become overly focused on their goal at the expense of general game strategy. 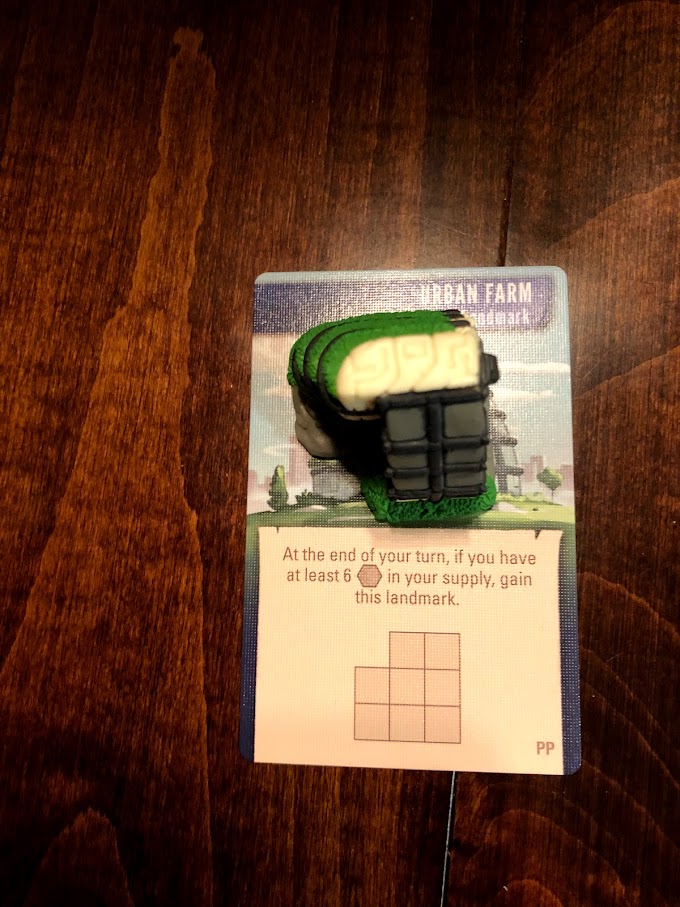 All of the new components packaged with the Plans and Ploys  expansion feature the same artwork style and the same quality of construction as those of the base game. The additions integrate very well in terms of gameplay and strategy too. I wouldn’t be surprised at all if Stonemaier revealed Jamey had done a Peter Jackson: Lord of the Rings  move with this game, designing everything all at once and just releasing it in separate parts as the base game and an expansion. I especially appreciated the new landmark tokens that saved me from that grumpy feeling that wells up inside of me when I realize someone else has already taken a track landmark I was eyeing. Now as soon as they claim a landmark from one of the tracks, the landmark token is removed, signaling its unavailability. Nice. 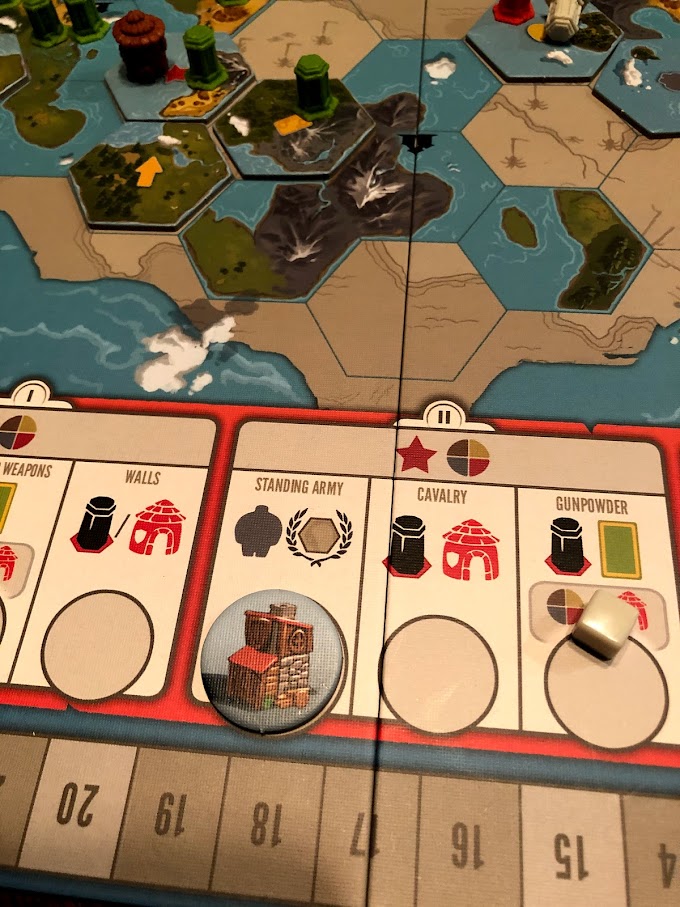 Our game was really close in score as far as everyone could tell for most of its duration. I wasn’t sure I was going to win, but I was having a hell of good time playing the six, count them, SIX, civilizations I’d managed to acquire in the game due to some crafty manipulation of my technology cards in conjunction with track actions. I felt powerful. Very powerful. 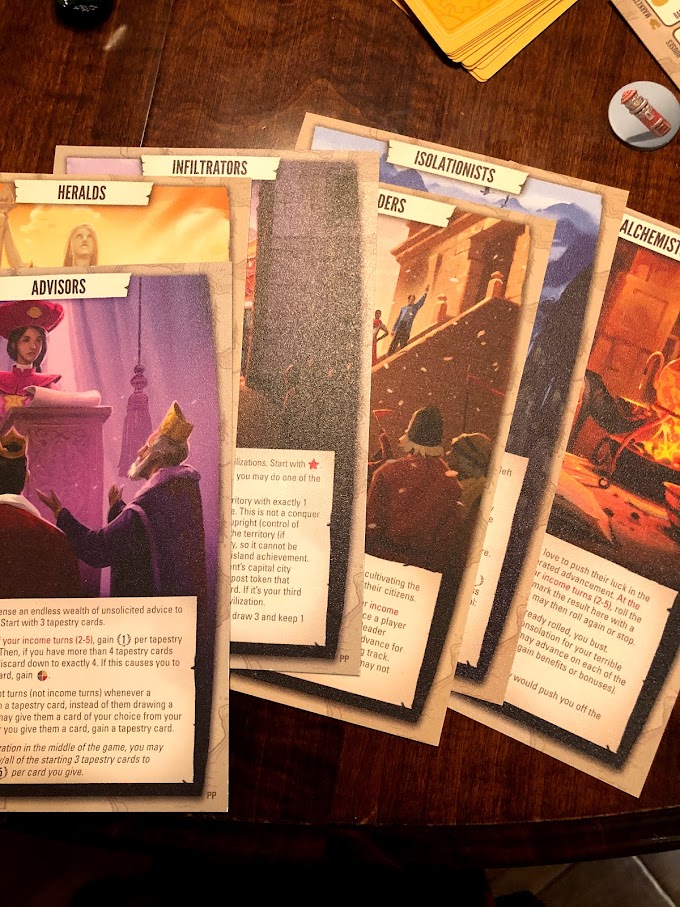 In the end, my husband Christopher won (but not by much) and I came in second. Our newbie players did pretty well at final scoring, especially considering they’d never played before and were playing against veterans.

I loved everything about this expansion. If you haven’t picked up the base game yet, call/email your local game store to reserve a copy (or order online from Stonemaier) and add Tapestry Plans and Ploys  to your order at the same time. You’ll want them both. And if you already own Tapestry, this expansion is calling your name. There’s still time for you to add it to your Christmas wishlist and if no one gifts it to you, you can give yourself a copy (you deserve it after surviving 2020!) when the new year rolls around.