As detailed in my last post, I flew to London (LHR) on United Airlines on Friday after work.

Once I landed at LHR on Saturday morning (at 6am) I made my way directly to the arrivals lounge that I officially was not supposed to have access to. I talked my way in anyway and enjoyed a hot shower and breakfast and some time on my laptop before it was time to meet the rest of my NoVA Travelers for our transfer to the hotel.

The meeting time came and went and no members could be found so I used flight tracking data online to review the logs of their flight. I found that both members I was expected were on planes running at least 30 minutes late so I headed to the hotel by myself to wait for them.

As soon as Jacob and Janice landed they emailed me and we all met up successfully at the hotel and checked in. We had one room on the club floor and another on a standard floor, but the desk clerk was kind enough to provide club/lounge access for both rooms. That would mean free breakfast the next morning.

Once we were settled, Jacob wandered off to do some things he had set on his agenda while Janice and I took a cab over to Westminster Abbey to tour the inside of the worship space. I had been in the courtyard of the Westminster last time I came to London but it was after hours and the locked doors barred my entry from my planned tourist trail stop. My second visit would end in just the same sort of disappointment- the Abbey was closed. I threw myself a quick pity party and we headed for our next stop - the Tower of London.

The tower (really a palace surrounded by walls with towers) was the home of the royals on and off since the year 1078 up until they were relocated to Buckingham Palace. It's a fascinating piece of history to take in while you walk across the spot where kings and queens have walked during ages before ours or while you sit quietly in the courtyard where state-labeled traitors (including Queen Ann and Queen Catherine) were beheaded. 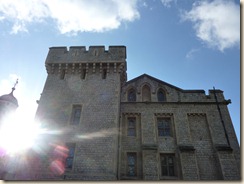 Like the rest of the Americans we were most drawn to the crown jewels and the instruments of torture exhibit. Oh and the castle toilets were pretty darn cool too. We enjoyed the complimentary guided tour (the Queen's body guard leading the tour looked so much like my father-in-law!) where we learned all about the royals and quite a bit about what it is to be a Queen's guard.

Our tour of the Tower of London took us well into the afternoon and then we took a taxi back to the hotel. I really like the taxis in London - they're roomy and sort of remind me of getting into a limo.

We had a relaxing evening at the hotel filled with napping and noshing on canapes in the club lounge (which was useful because I hadn't eaten since being in the arrivals lounge early in the morning).

Eventually 10pm rolled around and it was time for our big dinner at Murano. This time I traded event partners in that Jacob and I were pairing up for the dinner while Janice had other plans. 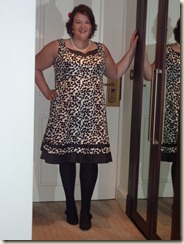 Outfit of the Dinner

A quick tax ride over to the restaurant and there we were! Murano is a bit small and simple in its décor. We made our way through ten courses of fine cuisine (not on the level in taste, presentation or service as The French Laundry but more like a high quality restaurant in DC that makes you happy when they discount their prices during restaurant week). 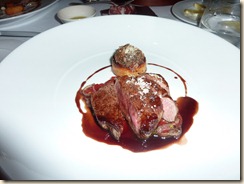 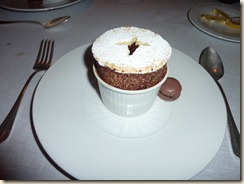 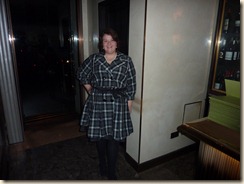 After a long day of flying, sightseeing and great food I was ready to sleep -which is exactly what led to me scrapping my plans to make a second attempt to visit Westminster in the morning when the alarm went off and I couldn't bear to get out of bed. Instead I chose sleep over God, dragging myself out of bed finally an hour later for breakfast in the club.

With just a few hours left to spare before we needed to return to the airport for the flight home I filled my time by browsing the stores on Oxford Street. I hit all the shops recommended by the UK fatshionistas I follow in the blogosphere: Evans, Dorothy Perkins and New Look. Then I entered the zoo that was Primark and found a few perfect frilly feminine skirts to remember London by.

It was a great trip and I'd be happy to fly to London for dinner again when the chance comes along.