Last week we received Hues and Cues from The Op Games. We recently finished playing through Scooby-Doo Escape from the Haunted Mansion (a fantastic game in The Op Games catalogue designed by Jay Cormier, Sen-Foong Lim, and Kami Mandell that you should absolutely pick up to play with your family) and wanted to give another game from the same publisher a go. I picked Hues and Cues because I’ve been pleasantly surprised by other “test whether our minds think the same way” games such as The Mind  and Wavelength.

In Hues and Cues, players gather around a large central board comprised of 480 graduating colors of the rainbow surrounded by an x-y axis and scoring table. White and black (which are technically not colors) are conspicuously absent as are shades (mixtures of color + black; e.g., grey) and tints (mixtures of color + white; e.g., cream).  On each player’s turn, they draw a card with four colors and the x-y axis codes of those colors depicted and they select one. 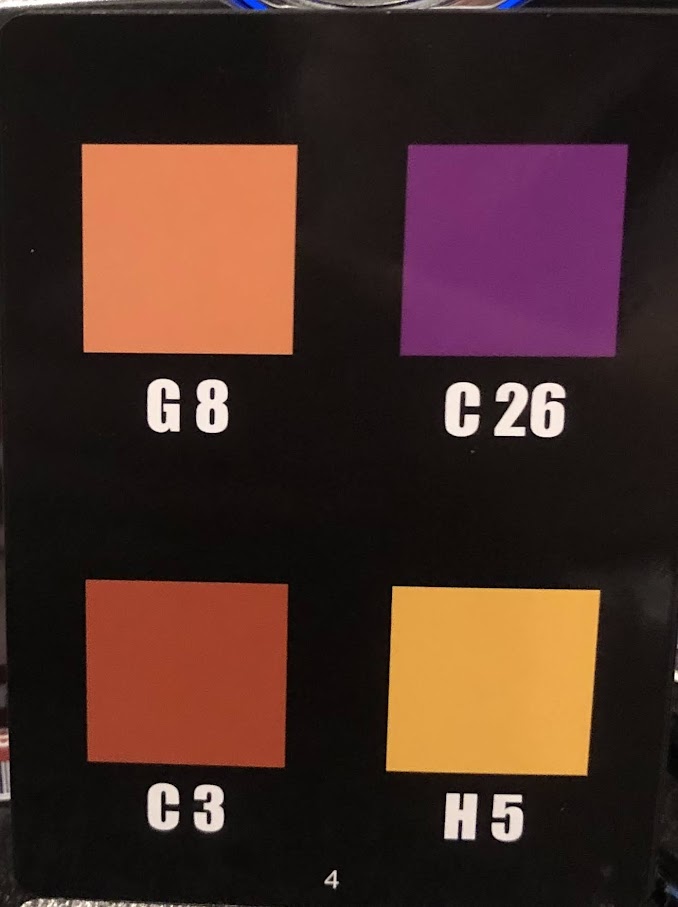 They are in the role of the clue giver. They attempt to convey which one they selected using a one word clue without directly pointing to it, naming its x-y axis, or using basic color references such as “yellow” or “green”. After they’ve provided their clue to everyone, each of the other players gets to select and mark a color on the board with their token that they think is the one to which the clue giver was referring. Then the clue giver gets a second shot at leading everyone to the correct color and this time they follow the same rules except that they can use a two word clue if they wish. Once again, all of the other players select and mark a color. 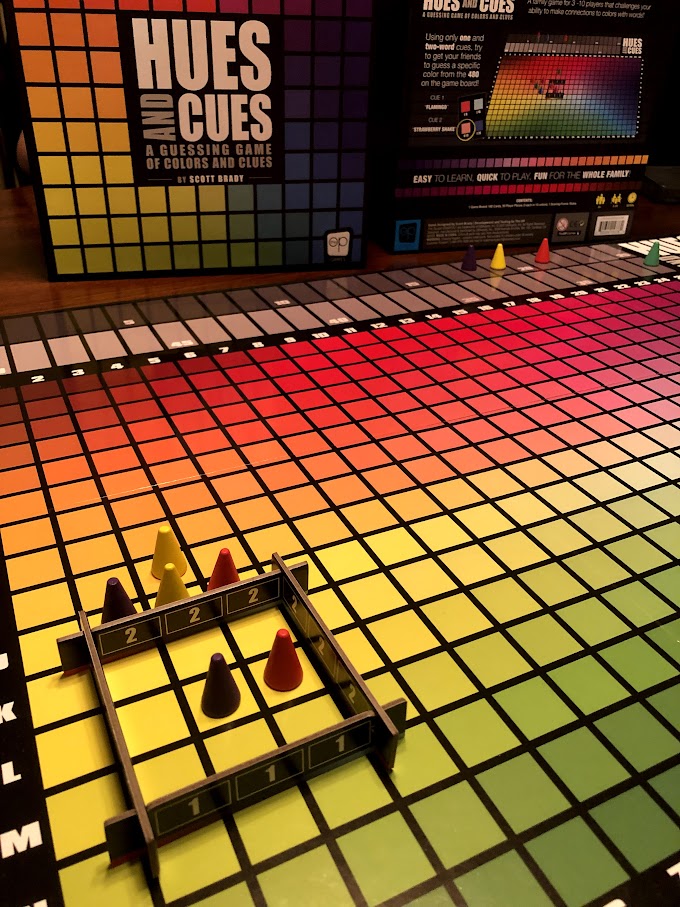 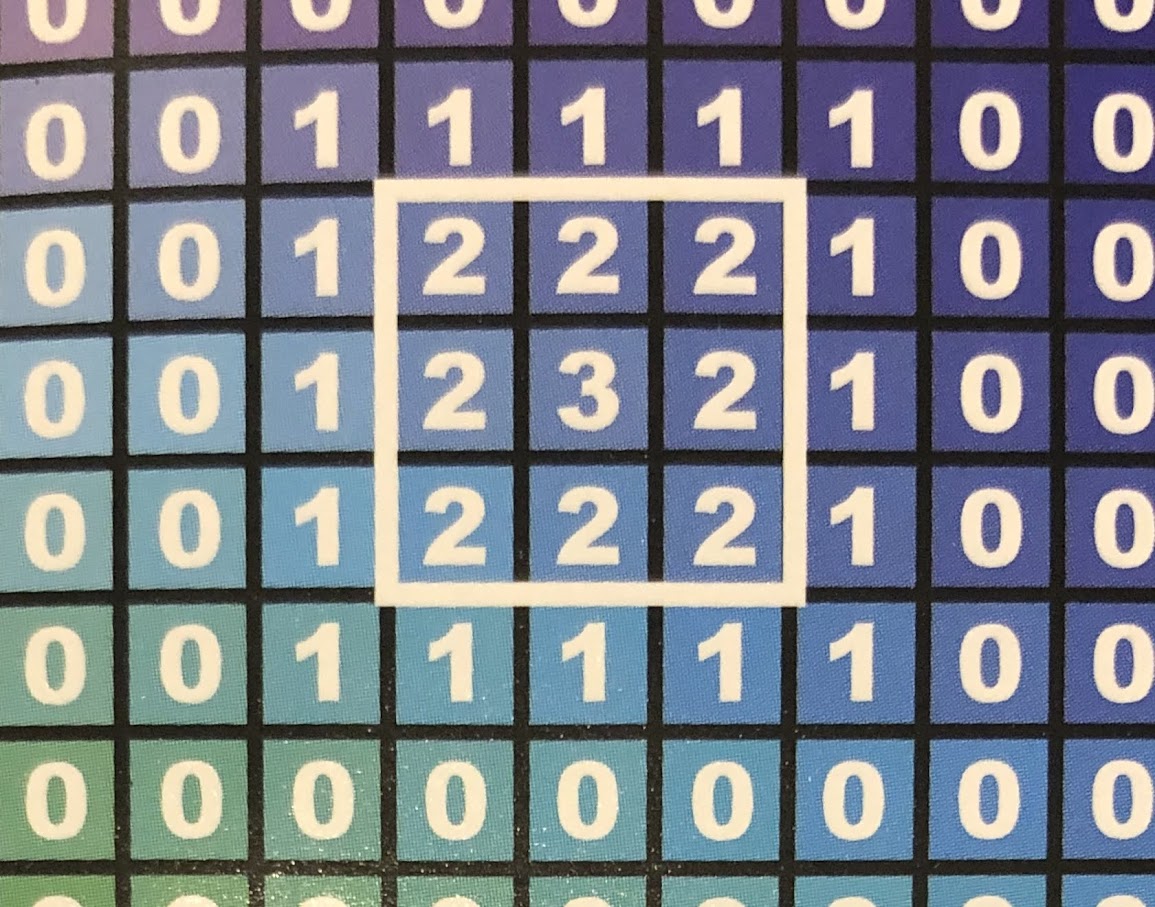 Just as with Wavelength, Hues and Cues reinforced the absolute truth that we all think a bit differently. When I say lilac and imagine the corresponding color, it’s likely that it’s at least a few steps away on the board from the color you imagine. Ditto for emerald and periwinkle. And don’t get me started on apricot, as we had a big debate among 4 players on exactly which color square corresponds to that. Then there are misunderstandings in the clues themselves. In our group this happened when a clue giver said robin and I assumed they meant the dominant color of the bird (orange) but they were thinking of the iconic eggs of the bird instead (a shade of blue). It also happened that time a clue giver said bazooka and I assumed they meant the rocket launcher (brown) and they were thinking of the bubble gum (pink).

Overall, I think Hues and Cues is a fine party game. My core gaming circle enjoys heavier strategy games, but we often look to a party game to start off our evening and get everyone comfortable before breaking into smaller groups to play the brain busters. Hues and Cues  works well for us in that role. I prefer Wavelength ever so slightly over Hues and Cues so if you’ve only got the budget to add one more party game to your collection I’d lean in that direction, but if you’re open to a couple of games or if you already have Wavelength and want something a little different, pick up Hues and Cues. One thing I really appreciate about Hues and Cues is that its language independent. As long as all players speak a common language, it doesn’t matter what that language is. You could even easily use sign language to give the clues. In this way, it’s especially a great game to bring into your collection if you host international board gamers (I’m looking at you, game cafe owners and Air B&B hosts!). Please note: while it should be obvious, this is not a game for the colorblind.

You can pick up Hues and Cues  at Amazon for under $25.

Scott said…
Believe it or not, colorblind players can and do play Hues and Cues just fine! Because the game is about color perception, and not color identification, where a color deficient person sees an apple on the board is the same place as you see an apple (assuming you're both talking about a particular shade of a red apple).

Check out the comments by board game reviewer Ruel Gaviola who is also colorblind!

Jenni Stephens said…
Hey Scott that is awesome to hear and new information for me. Thanks for providing this educational information. I’ll update my review here and on BGG to reflect this information.
July 27, 2020 at 12:07 PM