My paternal grandparents were French and they traveled throughout the world. As they did so, they casually collected postcards from every hotel or restaurant that offered them. These cards collected dust in Mama and Papa’s (as we called them) possession as they were moved from apartment to apartment and home to home but never used. I get a lot of pleasure now from pulling out these old cards and researching the locations depicted to see if they’re still around. Sadly, most of them of have been demolished or have undergone major renovations.

One of my favorite cards from the collection was a postcard from LaGuardia airport in the 1950s. The caption on the back wrote that soon LaGuardia might surpass 1 million passengers a year. In comparison, last year 23 million people flew out of the airport.

I’m working on my penpal postcards this week and so I’m browsing through the cards to select one for sending. I’ve just come across another great card in their collection: The Virginia House Restaurant, in Marion, VA. Here’s a picture of it, as shown on the postcard collection site cardcow.com (where you can buy the last known unused card for approx $5): 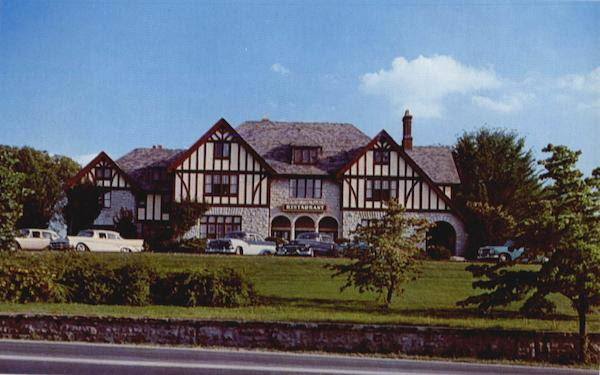 The caption on the back reads: On U.S. Highway #11 - 1/2 Mile from Marion, Virginia, 3 miles from Hungry Mother State Park. In the Heart of The Beautiful Mountain Empire of Southwest Virginia. Operated by Frances and Charles East. Phone St 3-4911, Marion, Virgina.

I’ve spent about twenty minutes researching this restaurant on the internet and it’s completely disappeared from the annals of history. No background, no demolition information. I’ve googled the family that owned it, the address, everything. Nada. One of life’s little mysteries I guess. It’s such a beautiful building, and I love the cars parked outside!