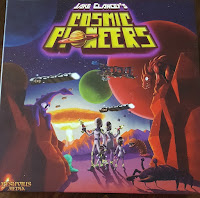 After chatting with the Vesuvius Media team at Gen Con 2016, Christopher and I selected Cosmic Pioneers as our first foray into this publisher’s game catalog. The artwork on the box is cute and cartoonish and it made me feel good about opening up the game to get a closer look at its components. 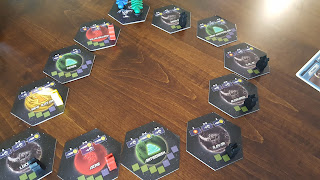 The game pieces are a mix of cardboard cutouts (player boards, round track, planets), cards (for scenarios and alien events), and sturdy wooden objects (cubes – for place markers and to represent colonists; and figures – to represent aliens). These components are visually appealing and they tie into the game’s theme very well. 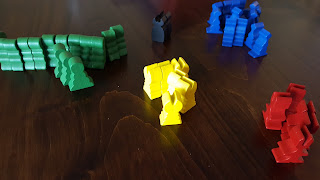 The plotlines and game objectives for Cosmic Pioneers are simple and entertaining: all players are in a race to colonize the selected planets of the Tau Ceti system, accumulating victory points (by settling and controlling planets as well as hoarding cash reserves) along the way. Hostile alien species as well as our fellow players seek to thwart our goal. At the end of 12 rounds, the player with the most victory points wins the game. The game offers variability in the plot through an abundance of planets and aliens to select from in setting up each game as guided by the scenario cards, so there is a lot of replay ability built in.

So far so good – quirky playful artwork, well themed components, and engaging plotline. That’s why I was so sad to find that as soon as we got into the mechanics of the game, things started to fall apart.

Getting an adequate handle on game mechanics is usually achieved through reading a game’s rulebook and then referring to reminder/summary cards kept handy during play. Not possible with Cosmic Pioneers.  There are no summary cards available and the rulebook is sparse therefore confusing in its lack of information. Here are just a few examples of unanswered questions we had during our play through: 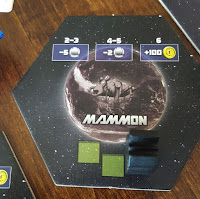 Notice that for a dice roll of 2 or 3, the player is supposed to remove five of their colonists from the planet. Five! On a planet that can only hold 3 lifeforms total (one slot is currently taken by an alien). 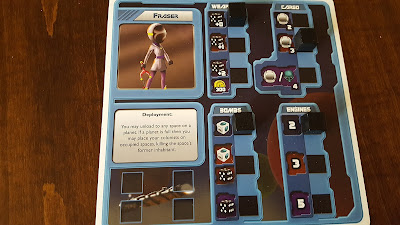 Already frustrated with these unanswered questions and die roll result nonsensical instructions, Christopher did a 1-800-NOPE out of this game halfway through when he found my character card to be too unfairly tilted in my favor. I had selected Captain Fraser, whose special ability is that she can kill off other player’s colonists and aliens taking up slots on a planet if the planet is full. Normally a player can only place their colonists on empty spots on a planet and so for a fully settled planet they’d need to attempt to bomb lifeforms off the planet first which involves dice rolling and luck). He grew pretty irritated watching me visit every planet he had fully colonized and removing his colonists and replacing them with my own.

I’m disappointed that Cosmic Pioneers is rather unplayable in its current configuration. The good news is that the game has some great foundations (nice artwork, good plot) and could probably be rendered playable pretty easily with some thoughtful editing of the game mechanics and rulebook by the designer. If that should happen in a future edition, I’d definitely be willing to take another shot at playing the game.
----------------------------
Publisher: Vesuvius Media

Players: 2-4 (We played with 2)
Actual Playing Time (vs the guideline on the box): About 30 minutes
Game type: Area Control
Rating: