My husband bought Cyclades some time ago, but after watching a few reviews of the game describing it to be slow building, he just couldn't work up the enthusiasm to get it on the table for play. So when I recently ordered Kemet directly from Matagot, I added the C3K Creatures Crossover Cyclades/Kemet Expansion (which allows players to use the monsters from each game in the other game) into my cart as well because I'd read that really spices up each of the base games, especially Cyclades.

We have a regular group of friends we play area control/combat games with and I invited them over for a Cyclades game night a couple of weeks ago once the expansion arrived.  When we finally opened Cyclades, I was very impressed with the component artwork. Just as with the box cover art, the illustrations drawn by Miguel Coimbra and used on the game components are lovely and well suited for the Grecian theme. The miniature figures used in the game are detailed nicely. It’s a pleasure to play immersed in Miguel’s artwork and the images are all family friendly. 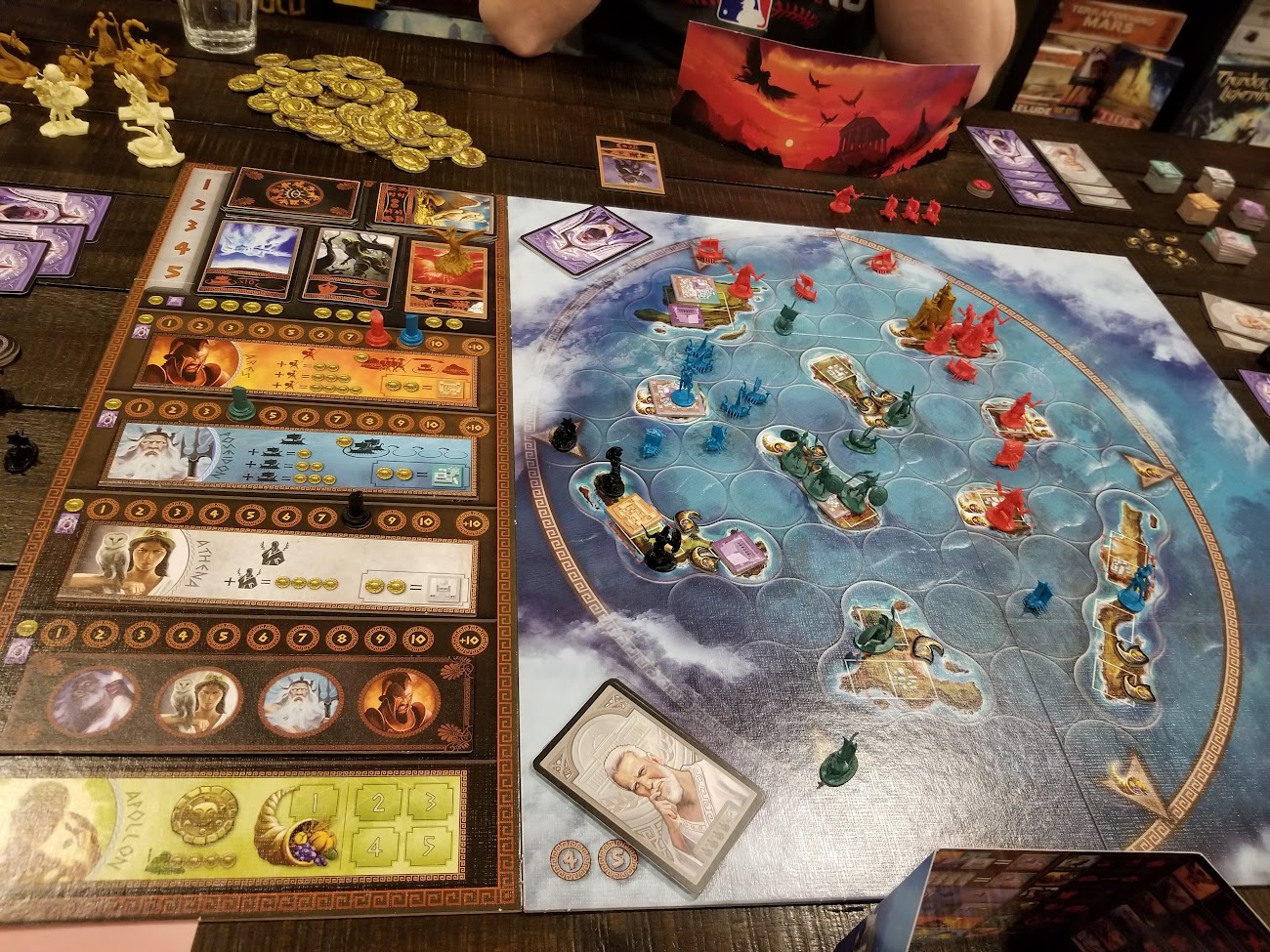 Cyclades components include a three piece main playing board constructed out of heavy cardboard; thick cardstock for player screens; cardboard markers, gold pieces, God tiles, and buildings; plastic coated cards;  plastic minis for the player fleets and the mythological creatures; and two 6 sided dice. Everything is well made and came in complete and perfect condition on the long journey over from Europe.

The theming overlays the game mechanisms well and I was easily able to use my imagination to get into the spirit of the characters. As players, we are leading independent Grecian cities in a race against one another to build metropolises while the Gods watch and help as requested. We also have several powerful mythological creatures we can call on for assistance, and with the C3K expansion, we are able to recruit the creatures from Kemet as Egyptian troop reinforcements as well.

In each round of Cyclades, players bid on a God to assist them in building/moving their troops, building/moving their ships, accumulating philosophers, accumulating priests, or building up their gold reserves. Each God also permits the construction of one type of building: port, fortress, temple, or university. Players may also bid on mythological creatures and/or Egyptian troop reinforcements which have a variety of beneficial powers. After bids are won and paid, income is paid to all players based on the number of prosperity markers under their control. Then players take turns executing their chosen actions, using the powers of the Gods and creatures they won during the bidding portion of the round. After all players have completed their actions, there is a check to verify whether any player has met the win condition (accumulation of two metropolises), and if not, the next round begins.  There are three paths to a metropolis in Cyclades: build all four types of buildings and convert them to a metropolis, accumulate four philosophers and turn them in to build a metropolis, or conquer an existing metropolis controlled by another player. 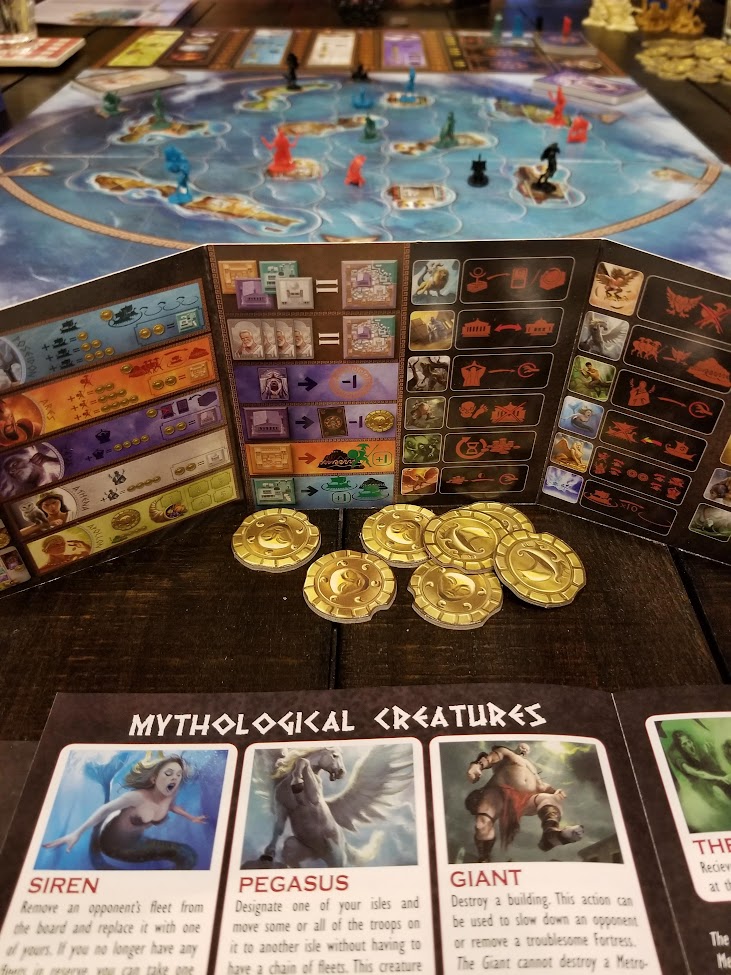 The gameplay is really well balanced. There was no runaway leader in any of the games we played; we were neck and neck the entire time and typically everything came down to the last round where it could have easily gone to any of us. This suspense also lends to the replayability of the game. In what would prove to be the last round of our most recent 4-player game, every player had one metropolis and we were all eyeing ways to obtain a second for the win. I was just about to execute my brilliant strategy to conquer my husband’s metropolis to win the game when I realized that if I did that, everyone would still have a turn after me and one of the other players could attempt to conquer my original metropolis that I would have to leave unguarded to conquer my husband’s. Oops! Change of plans. I shifted my strategy, and in a preemptive strike, I attempted to conquer the metropolis of David, which was within reach of both my island and my husband Christopher’s. The odds were against me based on our troop counts and I knew it was a long shot, but if I managed to kill David’s troops and capture his metropolis, then he wouldn’t be able to advance on my metropolis on his turn. As is my luck, I lost the battle and on his turn he successfully conquered Christopher’s metropolis for the win, which brought David’s metropolis tally to two. My husband had no actions of interest that he could execute on his turn. The final player, Dale, snuck onto my island to conquer my metropolis in a move I didn’t see coming. He used the special movement power of an Egyptian troop reinforcement creature and it was an easy takeover from there. This brought his metropolis count up to two also, but he didn’t have enough gold to win the tiebreaker over David, so David won. I was disappointed with my loss, but I’ve already noted several different strategies that I’d like to test out in upcoming games.

I do understand the comments made by other reviewers with regard to the slow build of the game. It’s an area control game without much opportunity to extend the areas you control in the beginning of the game. It takes several turns to build up enough troop strength and to gain the proximity to other islands required to conquer them. That reduces the overall amount of combat during the course of the game as compared to Cyclades’s sister game Kemet or other area control games such as TI4. However, I think Cyclades is still a keeper because of the competitive intensity that erupts near the end of the game and the fantastic theming. We have 800+ games in our collection and this is the only one with warring Grecian fleets backed by mythological creatures. The Egyptian reinforcements add another interesting dimension to the game, and if you already own Kemet the ER mini expansion is worth the small investment.