Three years ago Japanime released an English version of Dynamite Nurse (originally published in 2011) via Kickstarter. Although we added this take-that deck building game to our collection earlier this year, it took a bit of time to find some friends from our various gaming circles willing to play the game given the boundary pushing artwork. The character illustrations are in the style of anime - colorful and detailed - but bordering on pornographic. 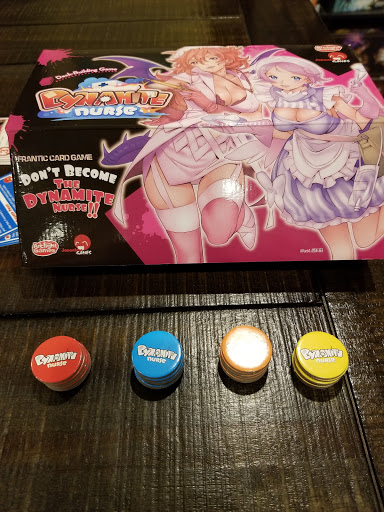 In making a case for the game's merits, I pointed out that Dynamite Nurse is centered on strong female characters (sure, the nurses are barely clothed and poses provocatively but they’re the main focus of the game and hold all the power). Also, the game has an interesting storyline. In Dynamite Nurse, players take on the role of nurses competing to save patients who have been severely wounded while out exploring dungeons. Fun fact: in an odd parenthetical note, the rulebook states the characters are actually doctors that are simply referred to as nurses in the fantasy realm of the game.

Components for Dynamite Nurse include 214 double sided glossy cards, 30 cardboard tokens, and a 34 page rulebook. You’ll definitely want to sleeve the cards for frequent use. 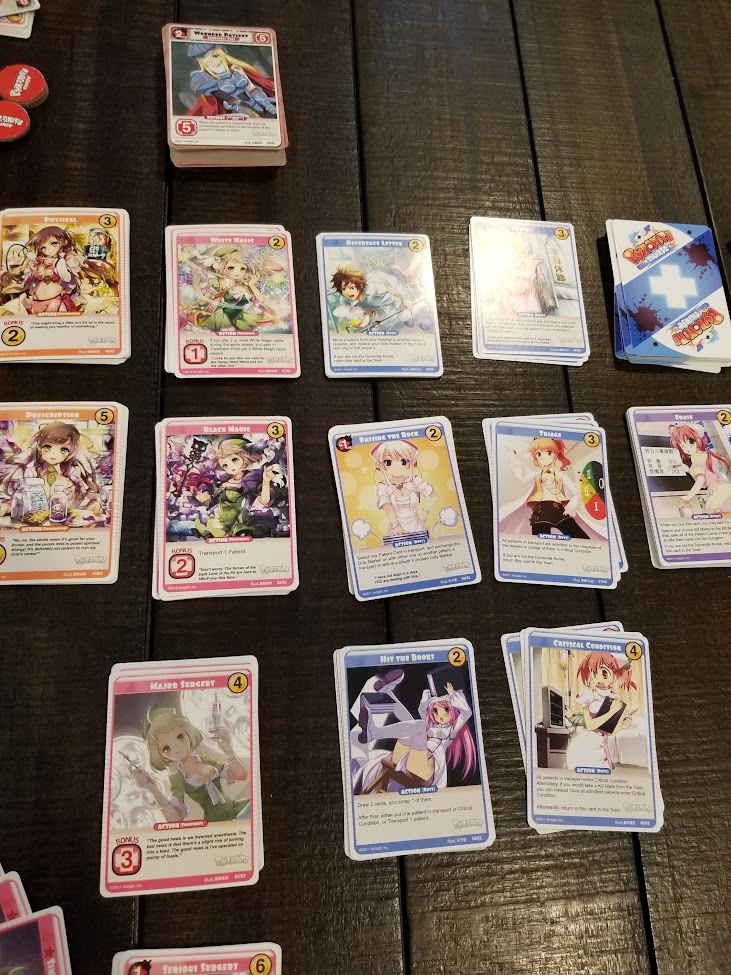 Gameplay is straightforward and easy to learn. In the first phase of each player’s turn, they do the following:

(1) play cards from their hand

These two main actions can be done in any order. If a player elects to treat patients, the treatment points on cards in their hand are used to conduct surgery (to fully heal a patient and add them to their victory point pile) or treat with care (to bring a critical care patient about to die to stronger health, while still leaving them in their hospital for further treatment). If electing to buy a card, a player is limited to purchasing a single card from the purchase decks, as is common in a traditional deck builder.

In the next phase of a player’s turn, they draw a patient from the Dungeon Deck and lay them out in the back of the ambulance, ready to be moved to a waiting hospital. When a patient is admitted to the ambulance, they are tagged with the hospital marker of one of the players, signifying they are under the care of that nurse. If there is no room in the ambulance for the patient (the ambulance can hold a number of patients equal to the number of players in the game), instead of drawing a patient from the Dungeon Deck, the patient in the front of the ambulance is flipped over, entering critical condition. This is bad for the player whose hospital tag is on that patient as the patient may eventually die and accrue Kill Mark Cards (also known as penalty points) for the associated player. 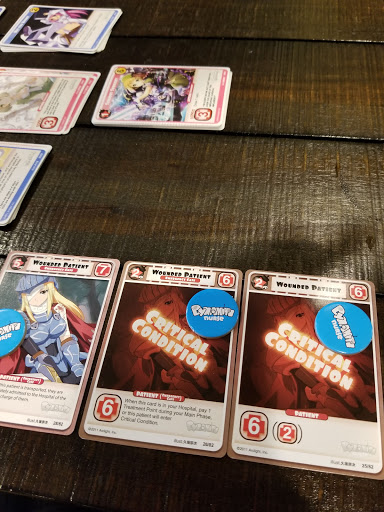 The title of Dynamite Nurse is held by the player with the most dead patients. It’s initially acquired by the first player to have a patient die. It’s a traveling status, in that, it will immediately shift to any player whose dead patient count exceeds the player who previously held the title. The designation provides some strategic advantages during the game (perhaps as a catch up mechanism) but earns -2 victory points at the end of the game for the player still holding the title.

Dynamite Nurse is subject to a bit of analysis paralysis, but it’s very limited because the pressing tasks required to keep from losing (treating sick patients) clearly take priority.

I really enjoyed the gameplay here. It was competitive without being too complicated, which is just how I like my card games to be (card games always have a bit more of a casual feel to me and I turn to them when I want a relaxing game). We had a lot of laughter during our games and the take-that actions didn’t upset anyone too much as they were pretty evenly distributed among all players. I love almost everything about Dynamite Nurse. That being said, I’m disappointed Japanime doesn’t publish a family-friendly version of the game so that I can play with a wider audience. I’m not naïve; I understand that racy artwork adds to the appeal for a certain demographic but the sexualization of the characters in Dynamite Nurse isn’t subtle – it’s right in your face on every card and a major turn off for players who are more conservative, have strong feelings about portraying women as sexual objects, or those who want to play the game with the under 18 crowd. There is no way we could play this with our kids and it’s only because of the artwork. During one of our games, we spent four minutes debating what the inanimate object was between one of the nurse’s legs pressed up against her panties (cell phone was the consensus but one of my friends insisted it was a cheese grater). Another minor complaint - we found the included rulebook to be a bit confusing. Multiple times we had questions that the rulebook did not seem to provide a clear answer on and so our group had to come to a agreement on a house rule. For example, under Transport, the rulebook notes to draw a Patient Card from the top of the dungeon and place it in the ambulance in “the furthest location from the dungeon”. As the dungeon is left of the ambulance, this would mean placing the card to the right of any existing patients in the ambulance like so:

However the drawing two pages later in the rulebook meant to illustrate how to transport shows the new patient being added to the ambulance in the the location closest to the dungeon like so:

Aside from the rulebook confusion and the risqué illustrations, Dynamite Nurse is a compelling game that can be played in under an hour.  I’m giving it a OUI rating (take note Japanime – the rating will climb to a OUI OUI should a family friendly version be released).