Earlier this year, the team from Wyvern Gaming provided me with a review copy of Sojourn. This solo game was designed by Philip Loyer and released in 2019. 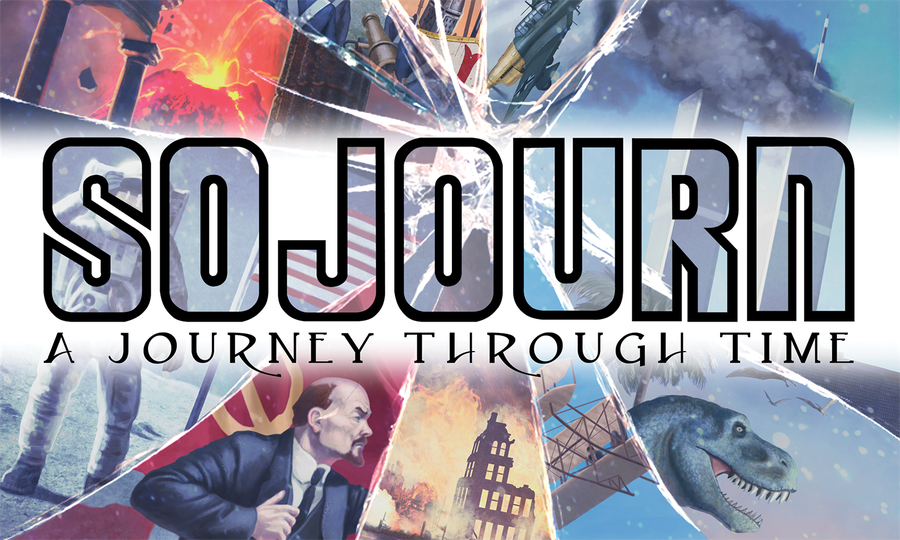 In Sojourn, a player takes on the role of a time traveler trying desperately to return home. To travel to a specific named time period (such as the one in which the traveler’s home exists), the traveler must use a Timesphere, which has unfortunately shattered into fragments that have been scattered across different time periods. Luckily, the traveler still has a handful of temporal charges at the ready that allow them to jump into random time eras in search of the fragments that can be reassembled into a working Timesphere. Before running out of the charges, or dying from injuries sustained in the various destination time periods, the traveler must find all of the fragments and make the leap home.

The premise here is very good, even if it does evoke classic time travel tropes (Quantum Leap anyone?). The problem is in the execution. I got Sojourn to the table several times over the past couple of months, and each time I hoped I’d have a better experience than before, but it never worked out that way. The components feel cheap – while the wooden cubes are adequate, the included cards are very thin and poor in quality (easy to bend and tear). The artwork is unremarkable. 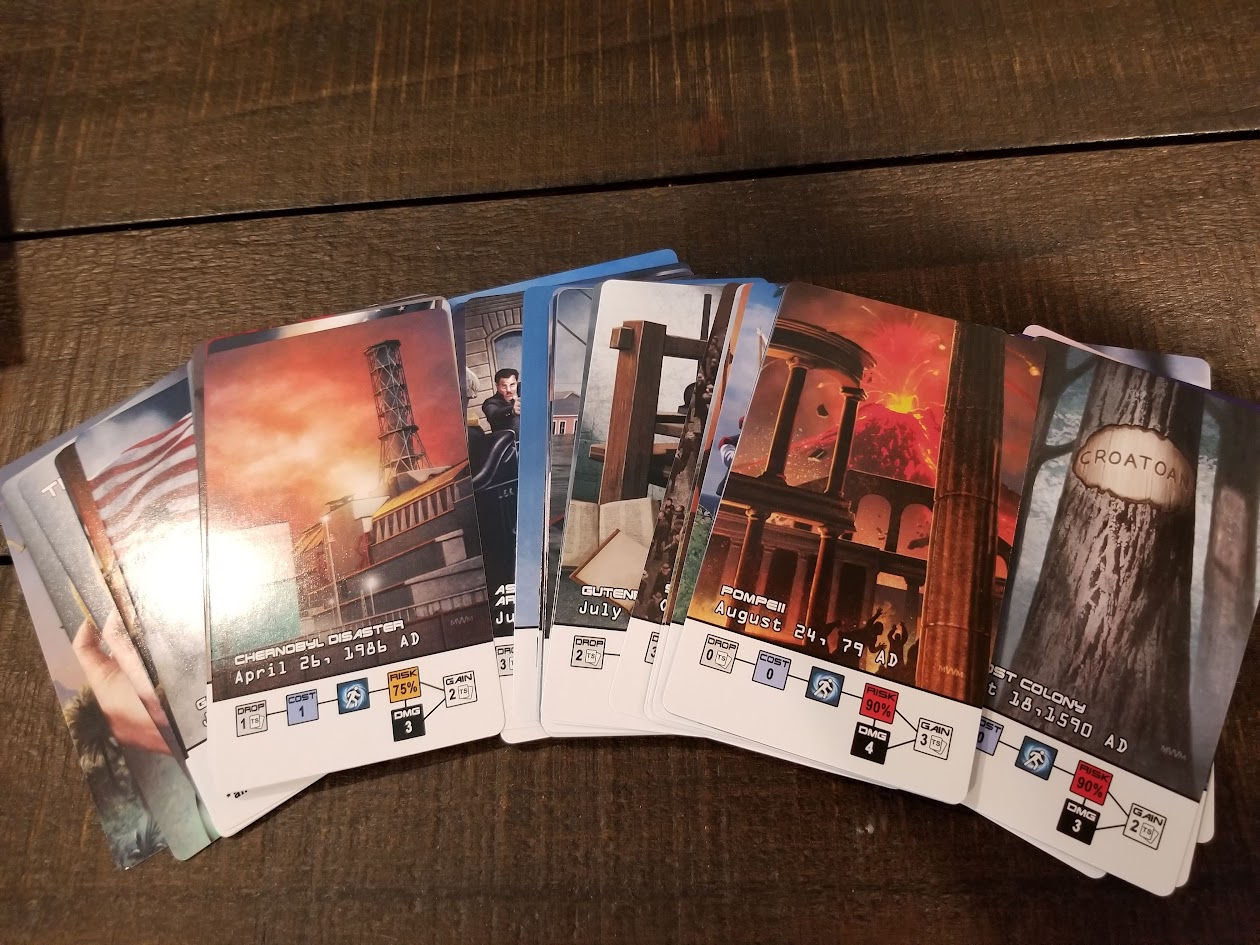 The rulebook is lacking. It doesn’t include an inventory of items, which is one of my pet peeves. How are you supposed to know if anything is missing or what things are without a proper inventory? For example, the rules reference Lockout cards, but without a visual inventory, I had no idea what these were until I thumbed through all the cards (turns out they are part of the Timestream card deck). The rules also reference the traveler meeple, but don’t indicate whether that is the blue or red meeple included in the components. I’m assuming it is the blue meeple based on a picture in the rulebook showing the game set up for play, but it would be nice if the designer included specifics in the text of the rulebook. More unanswered questions – how many Paradox cards are in the deck? This is important since a Paradox card lets you make a time jump without using a temporal charge and thus is the only way to win the game if you’ve run out of charges.

A lot of these problems might be possible to overlook if the gameplay itself was engaging. It isn’t. 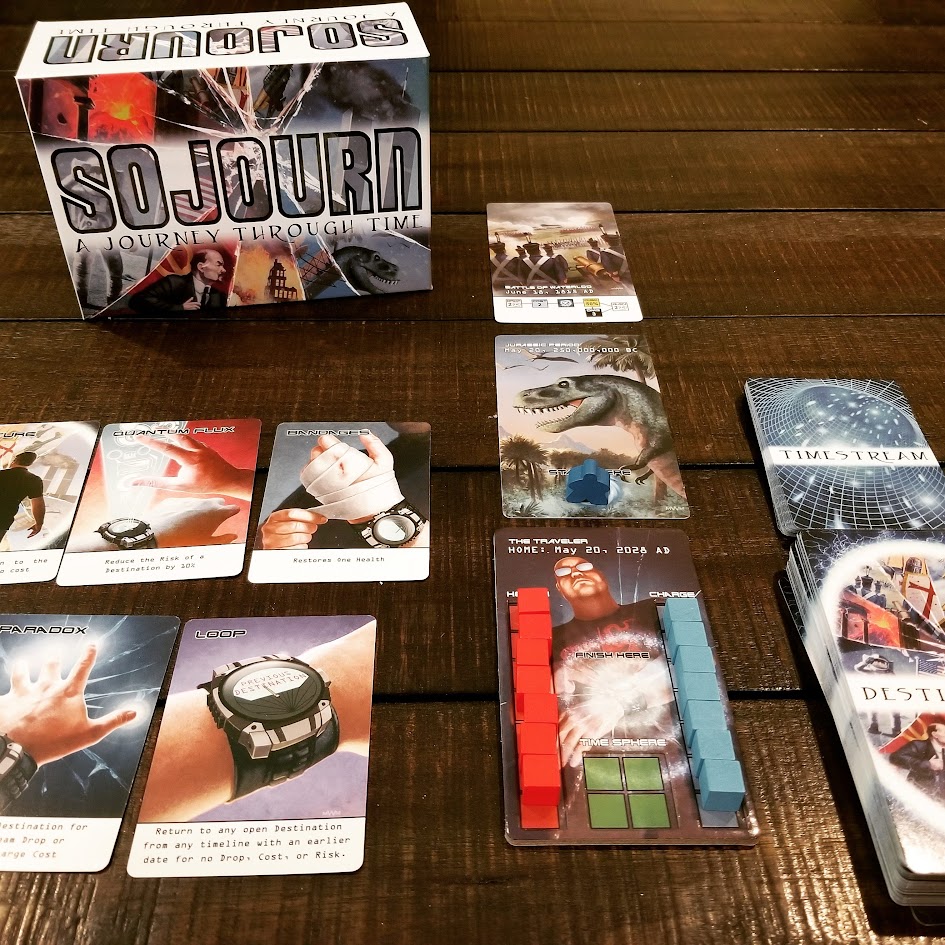 At any time during the game one can play Timestream cards from one’s hand (these cards have positive effects such as restoring temporal charges, healing the traveler, etc.), open a new destination in the timeline, or travel to a destination in the timeline. You must travel to multiple destinations to collect the fragments, but each time the traveler makes a jump to a destination, they risk injury, which is calculated by rolling dice and comparing the outcome to the injury risk value printed on each destination time period card. There are so many destinations with 50% or higher values that it makes it very difficult to survive for long in the game. I felt as though I was just going through the motions as each game progressed, and there wasn’t any joy in it. Perhaps executing the game in two player competitive mode would spice things up, but that requires two complete copies of the game, and I don’t think it’s worth the $30+ gamble to find out.

I have another game from this designer on my “To Play” shelf, and I’m willing to keep an open mind and give it a try (because everyone has ideas that don’t work out well in practice from time to time) but I cannot endorse Sojourn as a game that belongs in anyone’s collection.

Actual Playing Time (vs the guideline on the box): About 15 minutes 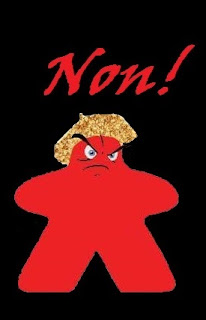