My husband Chris and I played another game of Disney Villainous last night.

Refresher: mass market games are those that are typically published by a major toy company (vs a dedicated board gaming publisher),  have a lower price point, cheaper components, uncredited or corporate designers and artists, weak narrative, and are light to medium weight in complexity.

In Villainous, players take on the role of Disney Villains who are competing against each other to be the first to complete their character specific objectives. These objectives align neatly with the narratives of the Disney movies from which the characters have been borrowed. For example, Ursula must find the Trident and the Crown and place them in her lair. And she gets rid of her enemies by using binding contracts! There are six villains included in the base game (more are available through the expansions) and turn sequence for each villain is pretty simple. There are 4 actions spaces on every villains board, and a character token is used to move between them. On your turn, you move your token to a new action space, take as many of the actions visible in the space that you wish, and then draw back up to your hand size limit. Actions include:

The game ends as soon as a player has met their objective.

Since The Little Mermaid  is one of my favorite Disney movies, I played Ursula the first time we got Disney Villainous  on the table. 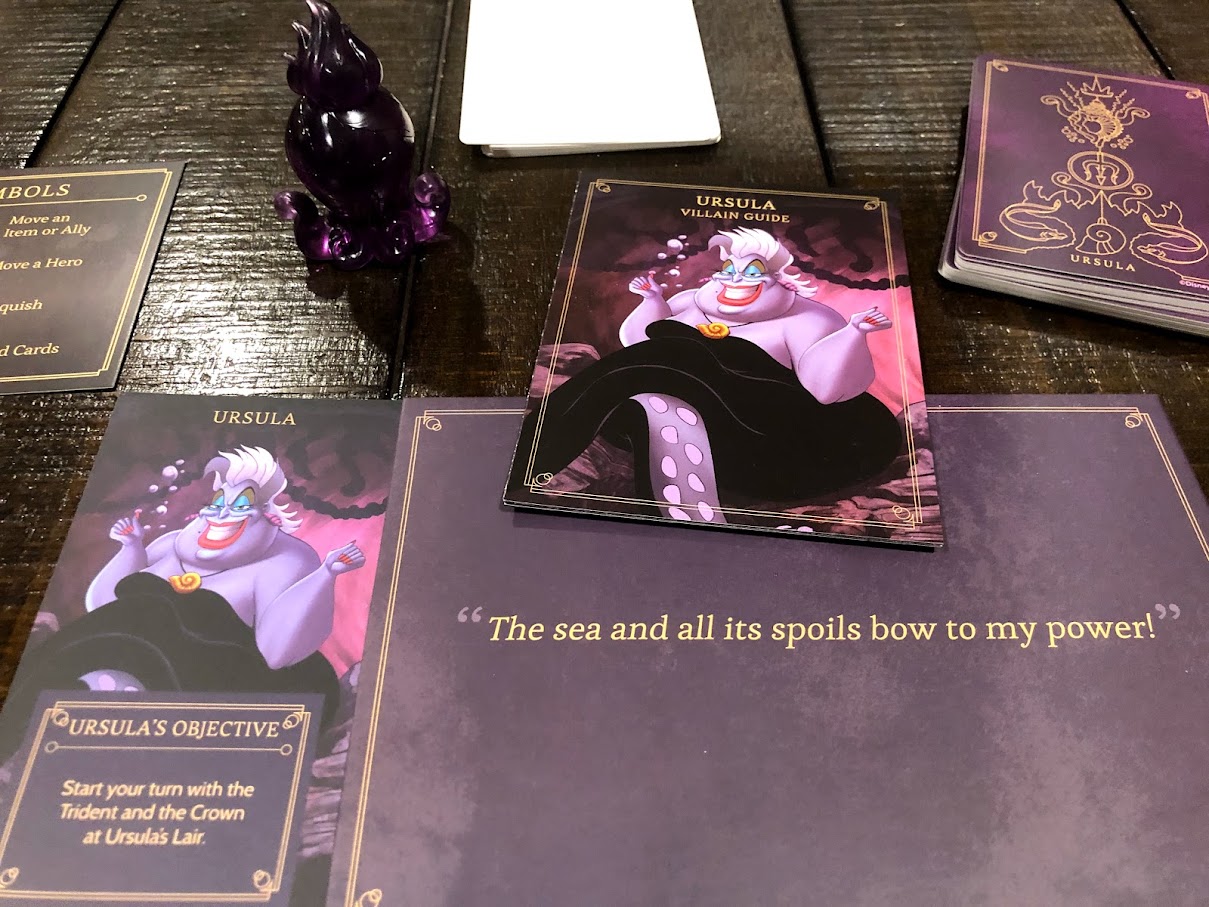 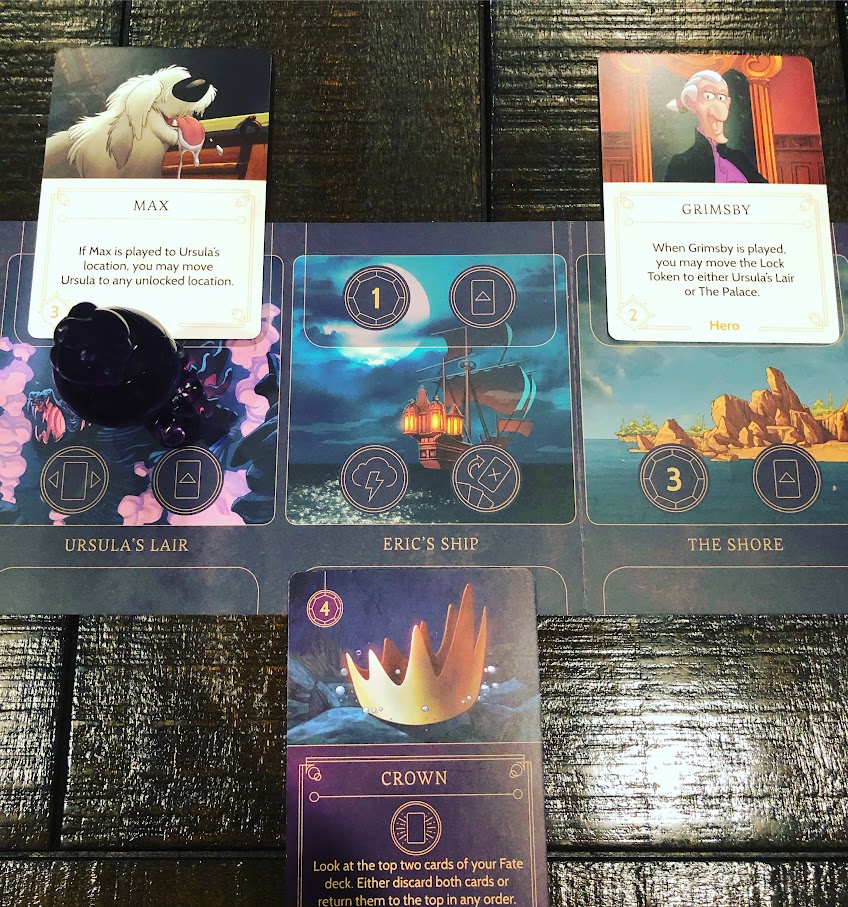 I really thought I had a great strategy to bring home the victory. That was a six player game that took hours and hours and I lost, as did everyone else, to the Queen of Hearts. But that first game was all it took for me to get hooked; I really enjoy playing this game. Which is odd, because I was worried it wouldn’t click with me after my last foray into mass market gaming (see my review for Horrified, also from Ravensburger, here). So how is it that a gamer girl who thought she was done with mass market games fell for a new one? I think it’s the connection I have with the Disney IP. The iconic artwork. The characters and their backstories provided in all the Disney movies I’ve watched. Their cast of allies and foes. I also feel like every player is immersed in their own narrative when playing Disney Villainous and the narratives are good. We’re all playing simultaneously but each of us is wholly encapsulated in our own storyline that makes sense, based on the movies. Horrified  presented differently; in that game all the IP was mashed up together in one setting and it didn’t make any sense. I also love the component quality in Villainous, especially the artsy character tokens, cast in jewel toned acrylic. Lovely!

Even though Ravensburger sent me the game to play a few months ago and we’ve played with the kids and our friends before, last night was the first time Chris and I played 1 on 1 against each other. Chris played Jafar and I played Prince John. 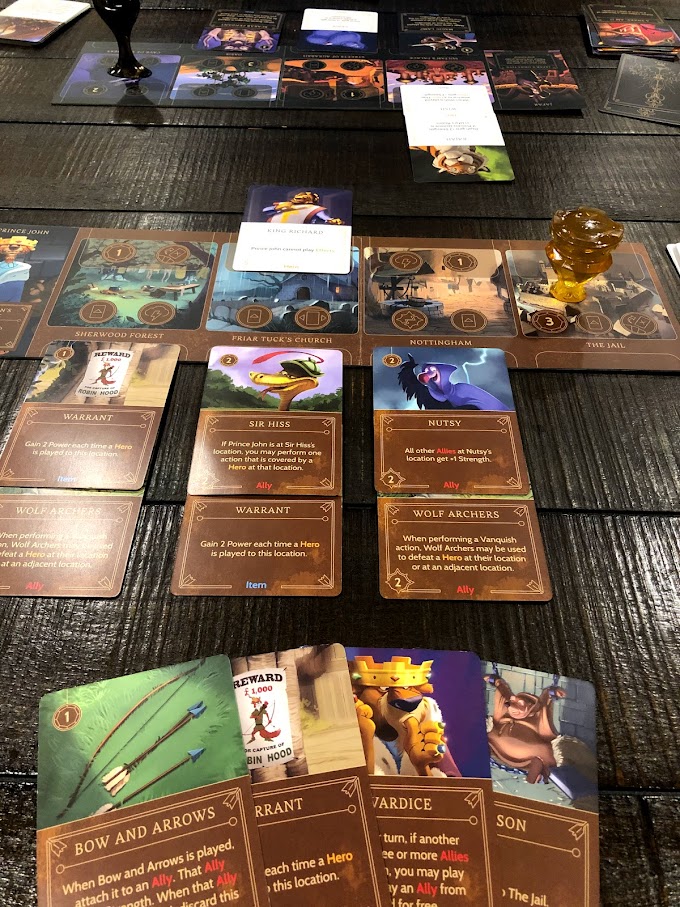 His character’s goal was to find and arrange some specific cards in his villain tableau while mine was to accumulate power tokens. I needed to attack him repeatedly with fate cards to stop him but for several turns I was limited in doing so because of a rule we unfortunately misapplied. We didn’t permit consecutive fate attacks against the same player. This is a rule designed to protect players from being attacked repeatedly by multiple opponents but it applies only at higher player counts. Because we learned how to play the game at 6 players, we internalized the rule and forgot to drop it when playing with just 2 players. We didn’t realize and correct our error until halfway through the game and I’m convinced that is at least part of the reason Prince John (and I) lost. I also think that my character is better suited for higher player counts as it’s easier to use the cards in both my villain and fate decks to grab power tokens when there are multiple players gathering tokens themselves (one of my cards lets me get 3 tokens anytime another player has 6 or more) and when there are several players laying fate down against me (one of my cards lets me gain 1 token for every hero fate card laid down against my tableau.  By the way, you’ll be happy to know the two player games takes less than an hour. Four players is probably the sweet spot when it comes to player count for Disney Villainous  - large enough to provide more opportunities to make the most of villain and fate decks, but not small enough to allow for a reasonable length of game.

There isn’t too much analysis paralysis in the game, but players can stretch out turns from time to time when they’re grasping for a winning strategy.

Replayability might be the one weakness in Villainous. No matter which of the six characters are selected for a given session, it’s likely players will run through their entire villain deck by game’s end, leaving nothing new to discover in future games. As soon as you’ve played the game a few times, you start to understand the strength and weaknesses of each villain and fate deck and things feel less exciting. This is definitely a game where you’ll want to pick up one or more of the expansions to reinvigorate gameplay.

My kids love this game. They enjoy playing with the adults and also with each other. It’s very kid friendly. It’s easy to learn and I like that it’s a pretty gentle introduction to the take-that mechanism (as compared to say, Broom Service, which is marketed to kids but is SO BRUTAL in its take-that actions that my kids end up in tears every single time they play).

Components include plastic coated cards, paper player pamphlets, cardboard player boards and power tokens, and the aforementioned acrylic character tokens. Everything is bright and colorful and the raised lettering and fancy font on the box and other components lends an upscale feeling to the game. The rulebook is well written with detailed explanations and setup instructions.

Disney Villainous  is equally challenging and fun for all ages.