Earlier this summer, Tokyo Sidekick arrived on our doorstep from Japanime Games. I knew absolutely nothing about the game before it showed up. Turns out, it's a big game, with a big board, in a big box. Unpacking everything, I was pretty impressed with the breadth of inventory. Check out the pic below from the publisher of the core game components beyond the board and cardboard standees.

My copy also included a comic book giving the origin stories of the heroes, as well as upgraded acrylic standees. The components are well made and I particularly like the acrylic upgrades; you’ll want these for sure if you can get them. 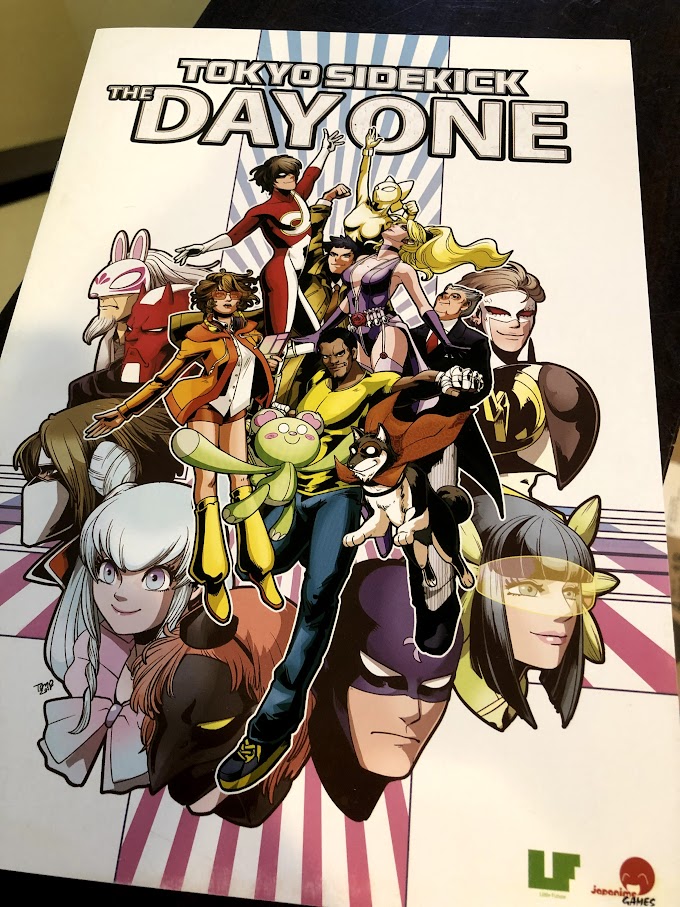 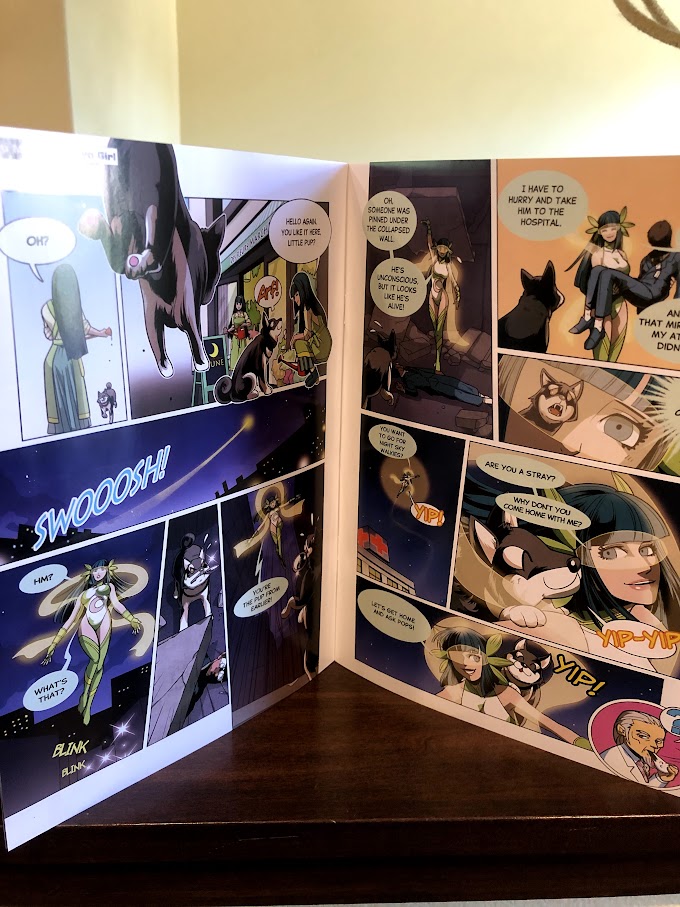 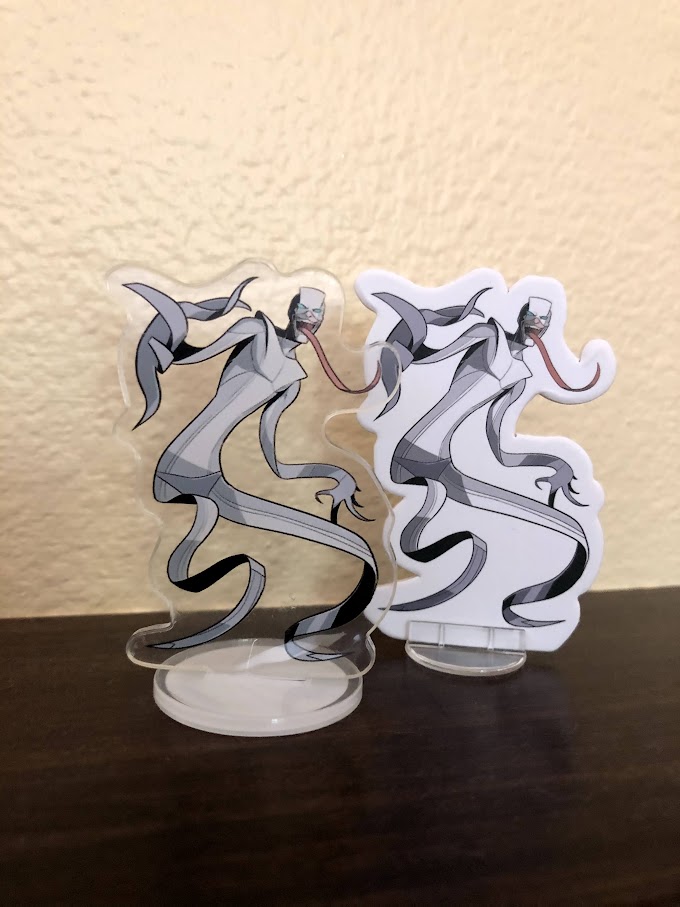 Perusing the rulebook, I started to get a good understanding of Tokyo Sidekick. It’s a cooperative game designed by Yusuke Emi where 2-4 players take on the role of heroes and sidekicks who battle against villains, supervillains, and menaces, while also navigating around the central board to deal with incidents as they crop up. There’s a lot going on at once for players to manage, and that’s part of the fun. It feels a lot like playing Pandemic, if the characters we played in Pandemic  were more personable and relatable. 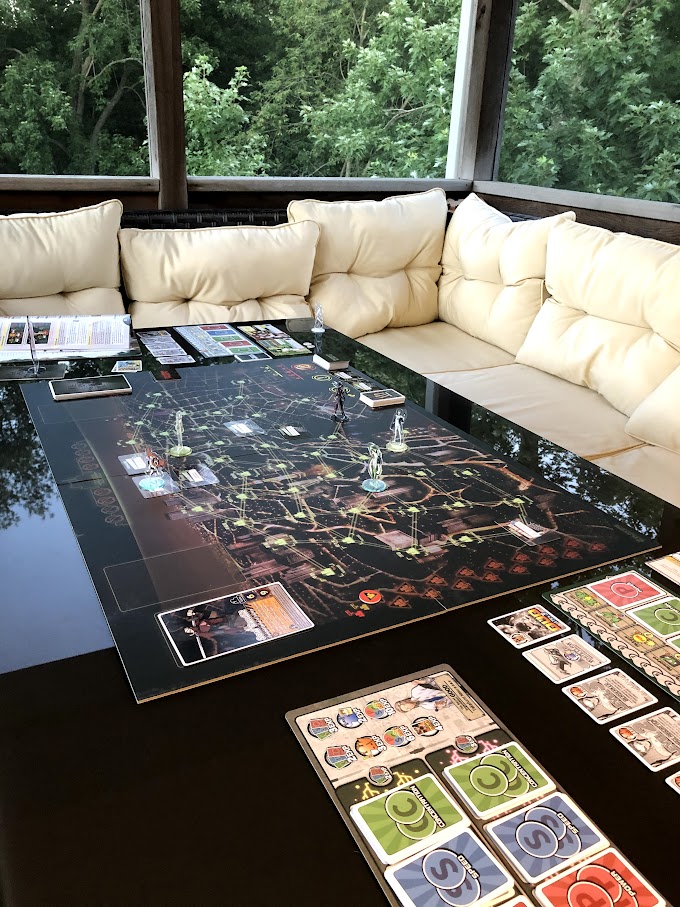 Turns pass back and forth between players and during the active player’s turn they must do their best using their array of selectable actions (actions that are paid for with energy cards  from their deck) to thwart evil and handle critical incidents that have been revealed. We didn’t find there to be much analysis paralysis during turns. At the end of each player’s turn, during the End Phase, new incidents are added to the board, the player redraws their hand, and circumstances are evaluated to determine whether additional steps grouped under something called “Crime Time” will occur. If it does occur, special effects on enemy cards activate, towns on the map get destroyed, a subset of incidents on the board become critical (if you leave these unresolved on the board for too long, you lose the game automatically), new enemies are revealed from the enemy deck and placed on the board, and new incidents are added to the incident row (to be added to the board on future turns).

What I love most about this game is the detailed descriptions and backstory on every hero and sidekick. Chamaru is my absolutely favorite sidekick to include on my team. Look at his adorable profile! 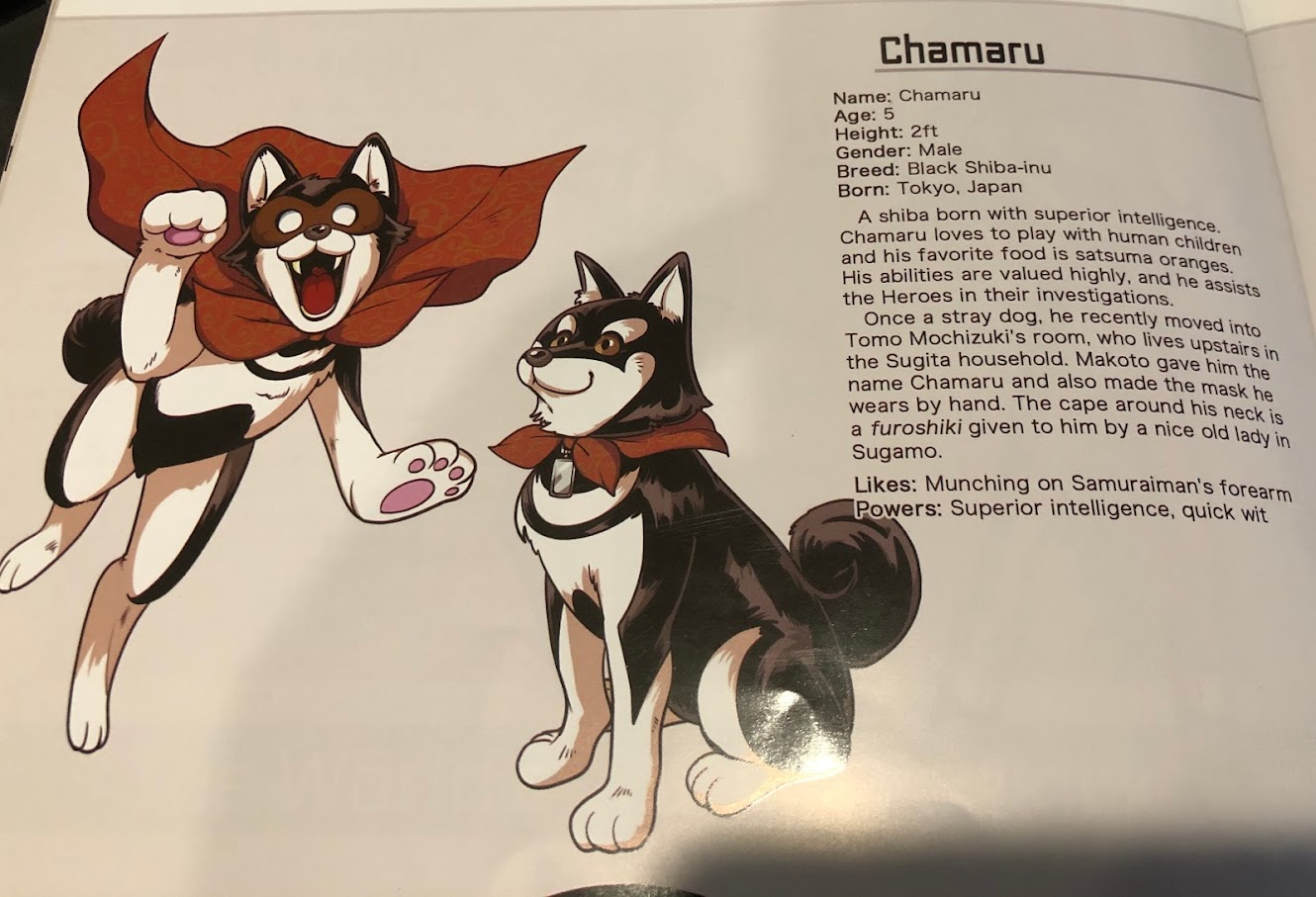 There’s even a mind map at the end of the rulebook showing the intricate connections between each hero and sidekick in the game. The artwork is lovely too. Sometimes I’m a bit hesitant when a new Japanime game is released because I never know if the artwork is going to push boundaries a bit too far out of the family friendly genre (which is always a shame when it happens because the gameplay is usually solid). Happy to report that while the game isn’t going to win any awards from the feminist corner for empowering representation, it’s nothing too risque; tweens and teens can play this without being scandalized.  Another thing I really enjoy about Tokyo Sidekick is the free lesson in Tokyo geography. All the locations on the board are neighborhoods of Tokyo, like Otsuka, Waseda, or Shinjuku. If you thought Pandemic was good at teaching you world geography, this game is really good at teaching you the areas of Tokyo as you move between them.

The rulebook is very detailed and well written. We didn’t have any trouble understanding the instructions and we weren’t left with any unanswered questions after reading it.

The myriad of hero-sidekick combinations and the variety of enemies in the enemy deck make the game highly replayable. We’ve played a handful of times and have yet to even eke out a win but we never got tired of trying. The first time we played we didn’t stay on top of incidents and then after that we tried to manage our incidents better but were overrun with villains. I’m sure there some clever strategy to score a victory in Tokyo Sidekick, but we haven’t stumbled upon it yet. Which is another plus for the game as far as I’m concerned; there’s no easy win to be had here. You’re going to have to collaborate closely with your team partners and really put your heads together to beat this thing.

This is definitely a game to put on the shopping list, if you’ve not ordered it yet. The Kickstarter for Tokyo Sidekick  just closed the first week in September, but Japanime has already started taking pre-orders for the retail version of the game on their website. If you’ve got tweens, I especially think this is a must-have. The whole family can work together to save Tokyo and learn Japanese geography in the process.