I really love the card game Lost Cities, designed by Reiner Knizia. When my husband Christopher and I were first getting to know each other, we used to meet up at Starbucks sometimes and play games. Lost Cities was one of our frequent picks. It’s a head to head, two player game in which both players are trying to outscore each other by laying down ascending runs of card suits on a small board between the two of them. There’s a theme laid over the mechanism (completing expeditions in the lost world) but it’s basically pasted on and so that is the last we will speak of it. So there we were, newly in love, eyeing each other across the table, smiling and flirting, and doing our best to beat one another at Lost Cities. It was awesome. And now, with the roll & write genre having made an impressive rebound a few years ago (let’s not forget the mechanism has actually been around since the 50s with Yatzee), Knizia has ported his award winning game Lost Cities  into this format, releasing Lost Cities Roll & Write  in 2021.

You can play the new Lost Cities  with up to 5 players, but in an ode to our romantic beginnings, Christopher and I played it exclusively with one another in successive matches.  The components are compact, lacking the pretty illustrations of the original game, and few in number – the rule book, a scorepad, three pentagonal trapezohedron dice (that’s 10 sided dice for the uninitiated), and three 6 sided custom dice with color suit symbols. Oh, and some pencils. That’s it. We could have played on an even smaller Starbucks table if we had this back in our dating days. 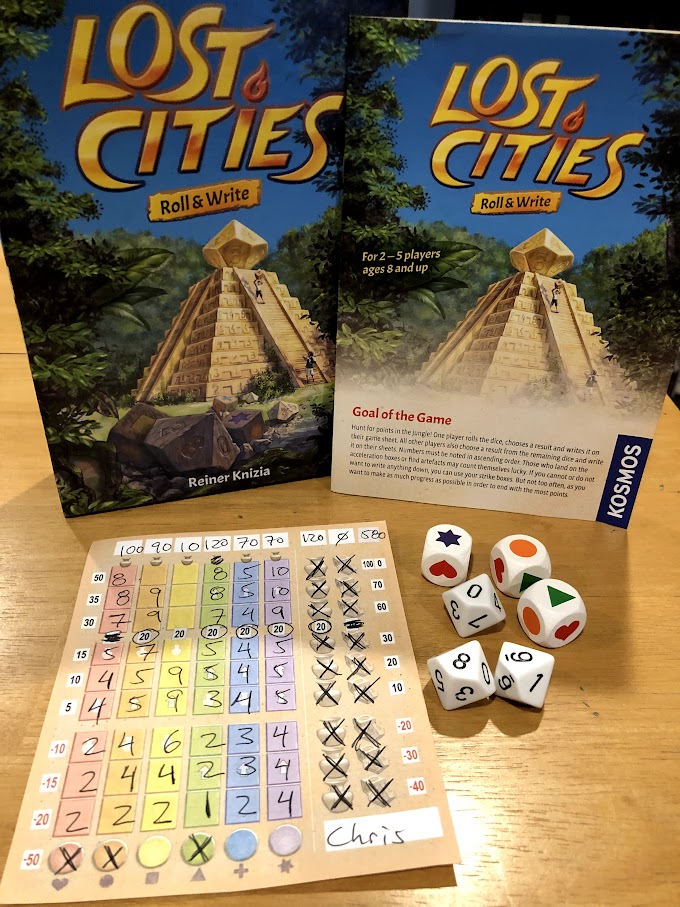 The cards from the original game (wager cards and numbered cards 2 to 10, in five different suits) have been translated into dice roll results. On each turn, one player rolls all the dice and chooses one of the six sided dice to represent the suit and one of the ten sided dice to represent the number. A zero on the number die can represent either zero (mimicking the wager card from the original game which serves as a multiplier for the total score in the selected suit) or ten (mimicking the highest card in each suit).

In place of the tableau built up on a central board, each player tracks the progress of wager and number cards they’ve collected for each suit in color coded columns on their individual score sheet. Wager cards have been transformed into little circular boxes to be marked off from a suit column when rolled, while the numbered cards from the original game have expanded to include the number 1 and are recorded as numbers written manually in the square boxes running up each column. Whereas in the original game, only cards higher than the last card played in a suit were permitted to be played on subsequent turns by the same player, in Lost Cities Roll & Write, numbers that are higher than or equal to the last number recorded for a suit may be written into the column after future dice rolls. 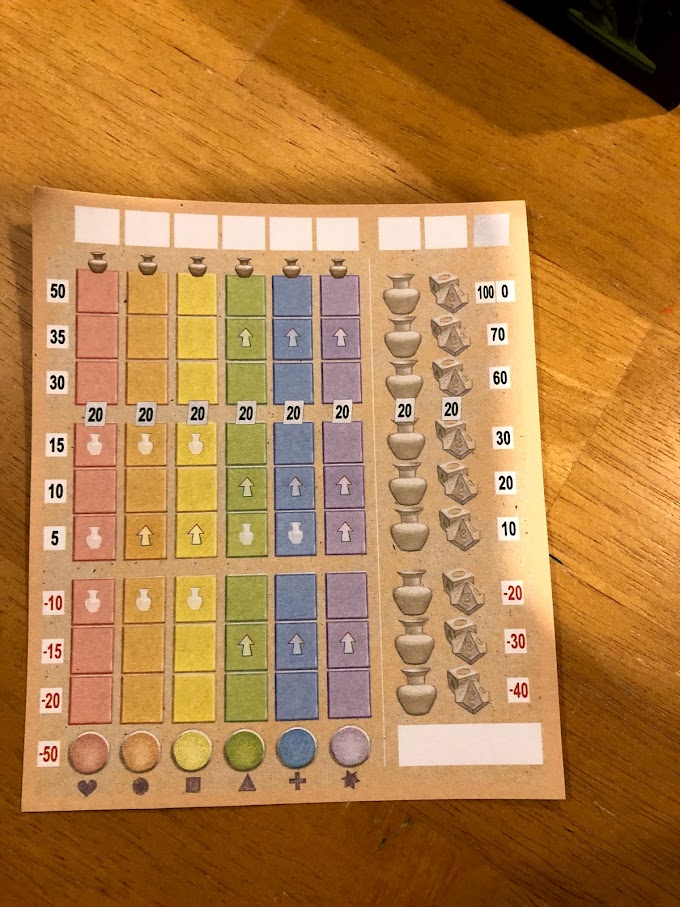 Expanding beyond the concepts from the original game, Knizia has included artifact icons on select spaces in each column and when those spaces are filled by a player, they may fill in one of the jars in the artifact column. Likewise, he’s included arrow icons on select spaces and when those spaces are filled by a player, they may fill in the next box in one of their suit columns with the number from the previous box in the column – note that it does not have to be the same column in which the arrow was filled.  There’s also a column for filling in dice shapes to represent rolls where a player could not or did not want to use any of the dice results. The latter column is particularly tricky to manage effectively, as it provides a similar point progression as the rest of the columns (negative scores for the first 3 boxes filled and then positive score for the rest) up until the last box in the column. If you color in that box, your score for the dice shapes column drops from 70 to 0. The bonus points awarded in the original game (20 points for laying down at least 8 cards in a suit) have been implemented in Lost Cities Roll & Write  for each column (including the artifact and dice shape columns) as a 20 point bonus to the player who is the first to fill in 7 boxes in the column on the scorepad. The roll & write game ends when either both players have filled in the dice shapes column completely or all eight columns have passed the bonus point marker. In our experience, the completed dice shapes column is a much more common trigger.

I’ve played a ton of roll & write games over the past few years. Some are instant objects of adoration, while others are infuriating piles of poo (I’m looking at you Imperial Settlers R&W). Lost Cities Roll & Write is fantastic; a great addition to the genre. Knizia did an excellent job of translating the feel of the original game into the new mechanism. The iconography is clean and easy to read and the game can be taught and played in less than a half hour. And of course, it takes up very little table real estate, making it perfect for travel or tight spaces (when traveling as a passenger, simply roll the dice into the box cover). If you twisted my arm and forced me to choose between Lost Cities or Lost Cities Roll & Write, I’d be forced to pick the original, but only because of the lovely artwork on the cards and the sentimental value I have attached to the game after my love and I played it in our early days. But who would go around doing such arm twisting? Nobody. Therefore, with a retail price point under $15 for each of these, unless you’re down to your last $15, I recommend you pick up both. Play the card game with someone you love when you have a little more table space. Play the roll & write anywhere, with up to four additional friends.

Publisher: Kosmos
Players: 2-5 (We played with 2)
Actual Playing Time (vs the guideline on the box): about 20 minutes per game
Game type: roll & write, dice rolling