I was delighted to receive Euphoria: Build a Better Dystopia just in time for Christmas in December. I had heard great things about the game, including its status as a Mensa Select winner, and I was eager to 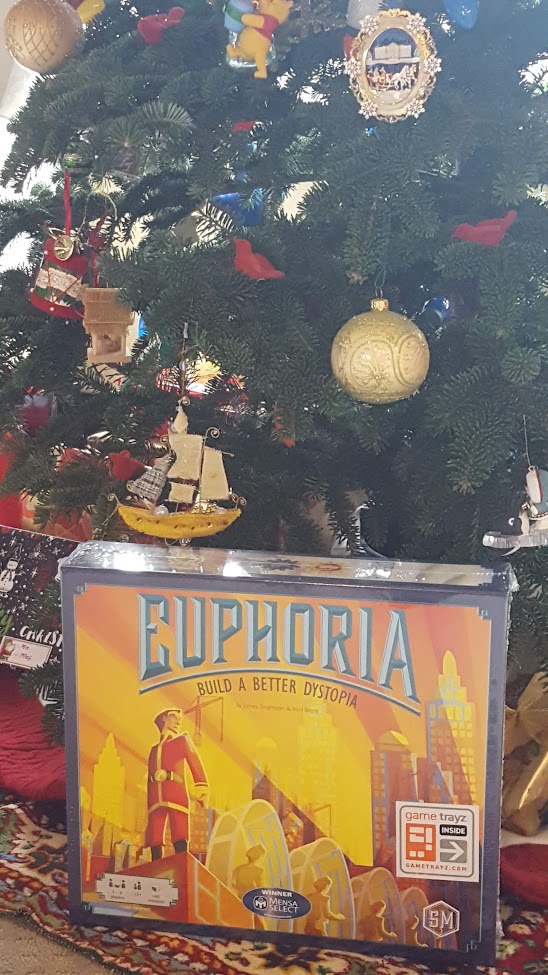 get it on the table for play.

The first time we opened the box, we were appreciative to find the components were nestled neatly inside GameTrayz. How thoughtful and practical is that? Kudos to Stonemaier for including the handy plastic organizers with the game. 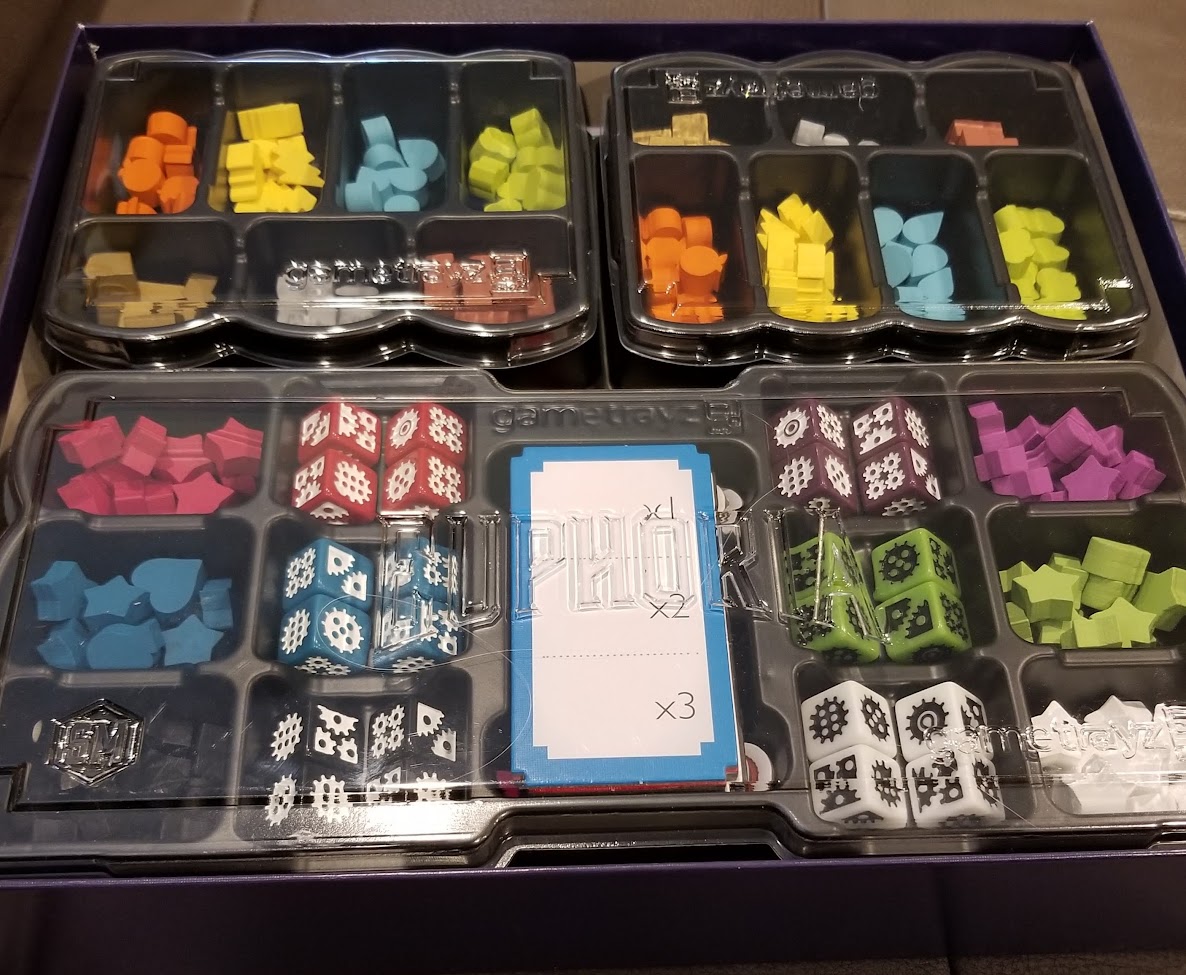 In Euphoria, we take on the role of labor managers, trying to keep our workers dumb and happy so as to avoid them quitting as we work to gain enough influence to takeover the dystopian society we are all members of. A bit of a dark theme, even though the gameplay is fun. This is a classic worker placement game with some area control and set collection thrown in for good measure. It’s also a tense race to a point marker finish line (in this case 10) and it features the signature Stonemaier twist – almost every action you can perform in the game potentially benefits at least one other player. You can’t really help yourself without helping others as you visit markets, build tunnels, and construct new markets with your workers.

Euphoria doesn’t generate much analysis paralysis, so the running time tends to closely adhere to the time frame listed on the box. There’s a lot of options each turn, but almost always one seems to stand out as the obvious best choice.

What’s rather unique about Euphoria is how it uses the value of the dice (which are your workers) as a representation of your workers’ intelligence and punishes you if the total intelligence among your collection of idle workers (that is, the sum of all dice that aren’t in play on the board) becomes too high. The consequence is that you must lose a worker; the highest numbered die is returned to the dice pool and is out of reach for you unless you put in the work and pay the cost to activate a worker again. It’s a very clever way to introduce some chaos.

Speaking of the dice, they’re quite lovely. I appreciated the custom design and the bright colors. What I did not appreciate 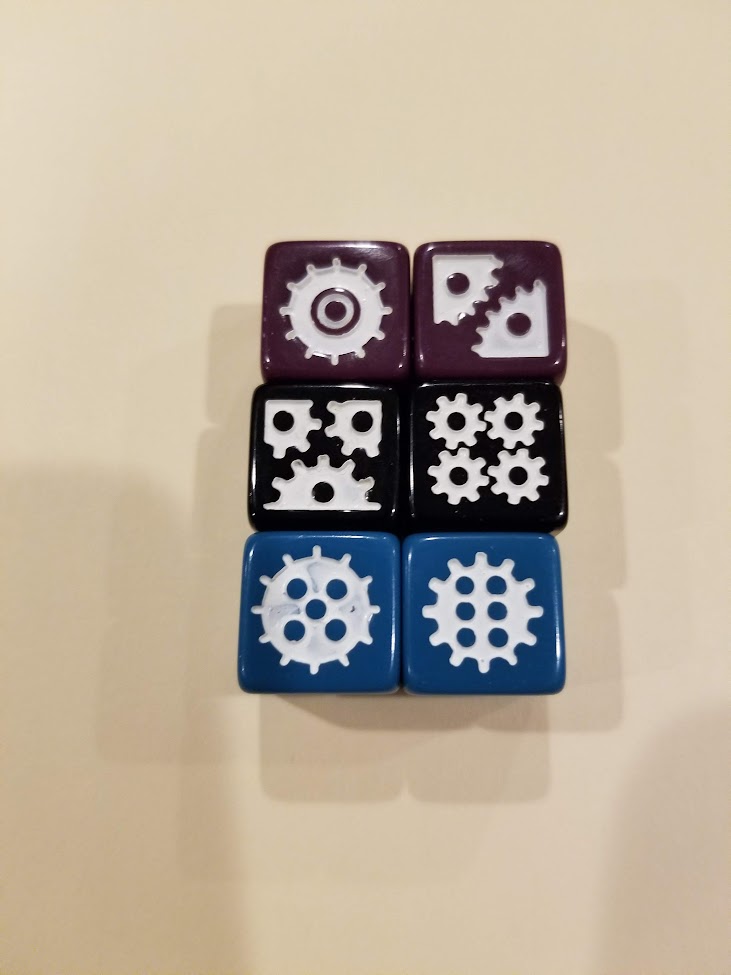 was the break in pattern for the ratio of pips to white shapes on the dice. The die faces for numbers 1 through 4 feature a design where each individual pip is surrounded by a white shape. However for the numbers 5 and 6, all of the pips are grouped together inside one white shape. Several times this tripped up my gameplay as I mistook a 5 or 6 for a 1. I can’t be the only person that this has happened to.

The rest of the components are as sturdy and well made as the dice. There are wooden tokens, some cardboard tokens, cardboard markets, plastic coated playing card sized decks of recruits and artifacts, and the main board. Everything should hold up well, even under frequent use.

The rulebook is well written and easy to follow. I’ve just got one minor criticism here –I would like to see a picture of all the components instead of just a written description to aid first time players in identifying components.

Beautiful artwork is usually necessary to draw me into a board game and then great gameplay sustains my interest. The illustrations and overall graphic design in Euphoria are functional more than exquisite, so some who approach games as I do might pass the game by. Don’t. It’s an engaging and addictive board game that plays well at all the player counts we tested and I will pick up any expansion Stonemaier releases for this title.

Bonus: my husband Christopher, the film aficionado, points out that for lovers of great literature and film, there are plenty of little Easter eggs hidden throughout the game.