I received a copy of Paper Tales from Stronghold Games in December. My husband had expressed interest in the game, so I put it on my play list, knowing nothing about it, but trusting his judgement. 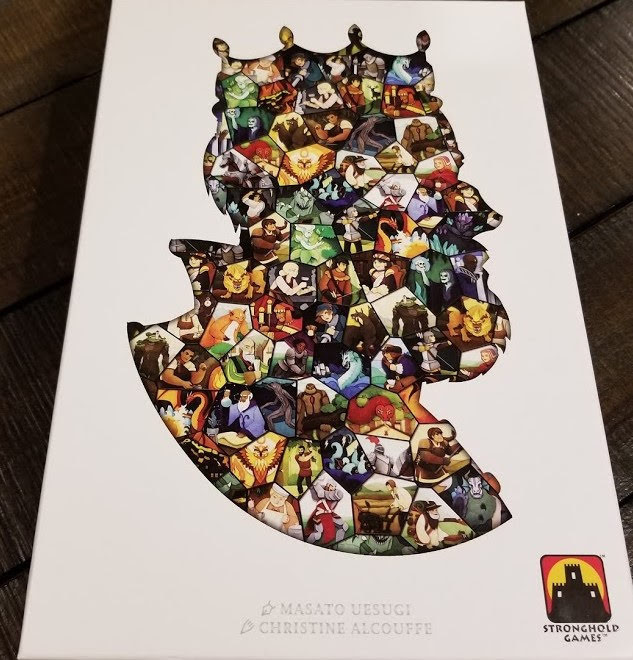 When the game arrived, I was delighted with the clever artwork featured on the cover, which features a collage of illustrated figures set against a white background for contrast. It really stands out and is a striking example of paper craft.

The cards inside the box carry the same style of illustrations and are also intended to be reminiscent of paper craft, specifically, paper layering. It reminds me a bit of the style employed in the video game The Legend of Zelda Wind Waker. 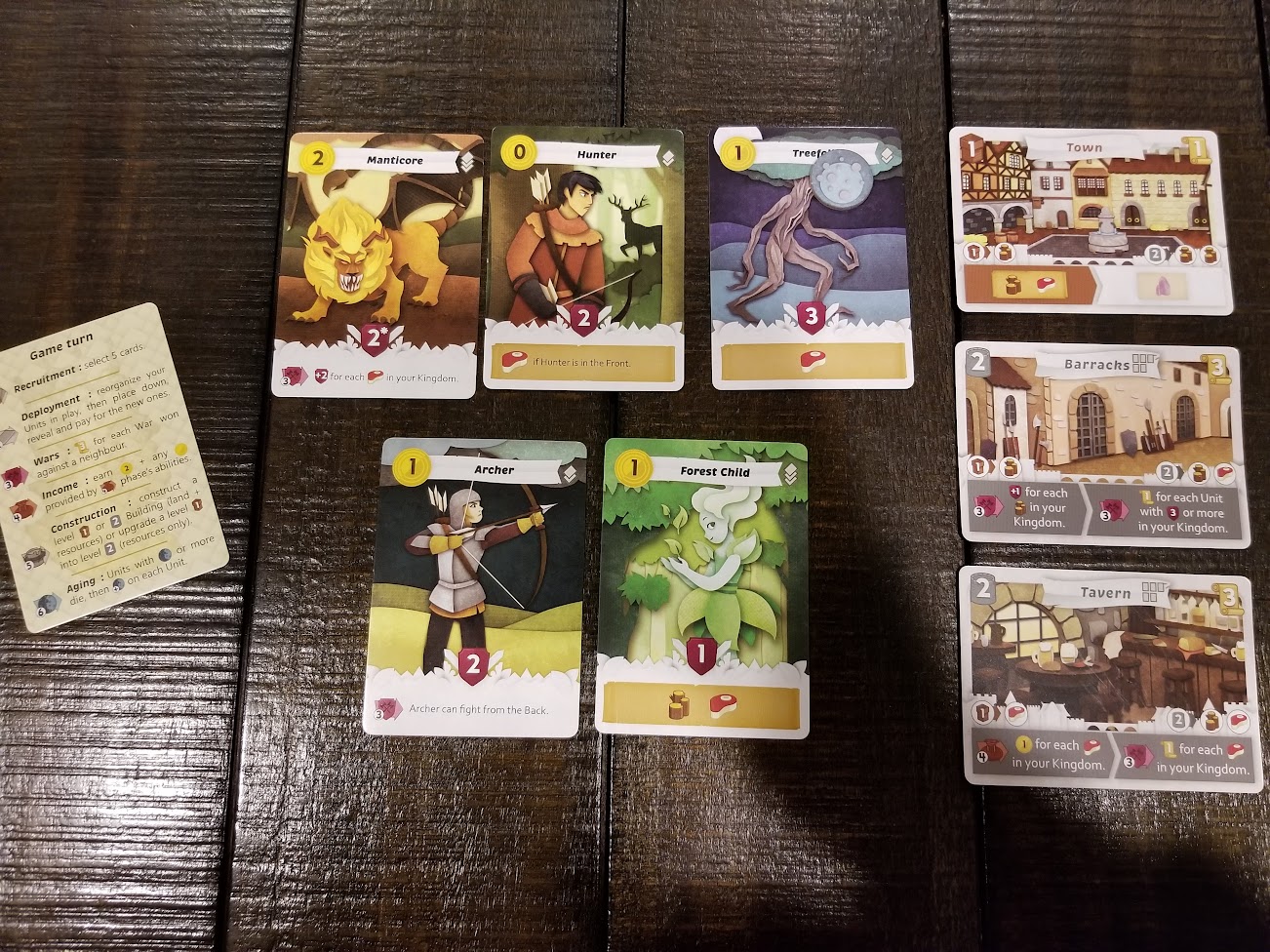 Fun fact: I actually took the time to look up the details on the CGI used in Zelda and I found out the designers used cel shading to give the artwork “a characteristic paper-like texture.” It’s pretty amazing when an artist can employ a technique that so perfectly evokes a style as intended that even those who aren’t schooled in art are able to view the illustrations and immediately associate them with other works that were also designed to express the same style. Kudos to Christine Alcouffe, the artist for Paper Tales.

The theming in Paper Tales  is a bit vague as to geographic location and historical time period but tells this tale:  players are controlling kingdoms for which they must seek to maximize glory by winning wars and  constructing buildings. Both the illustrations & the text on the player aids, unit cards, and building cards sell the story well, so we will give Paper Tales a pass on its rather imprecise setting.

Components for the game include the main scoreboard; the aforementioned cards (plastic coated for durability); wooden tokens for the player scores and time marker; and cardboard tokens for the gold and aging markers. We’ve played several games and the components have all held up well. 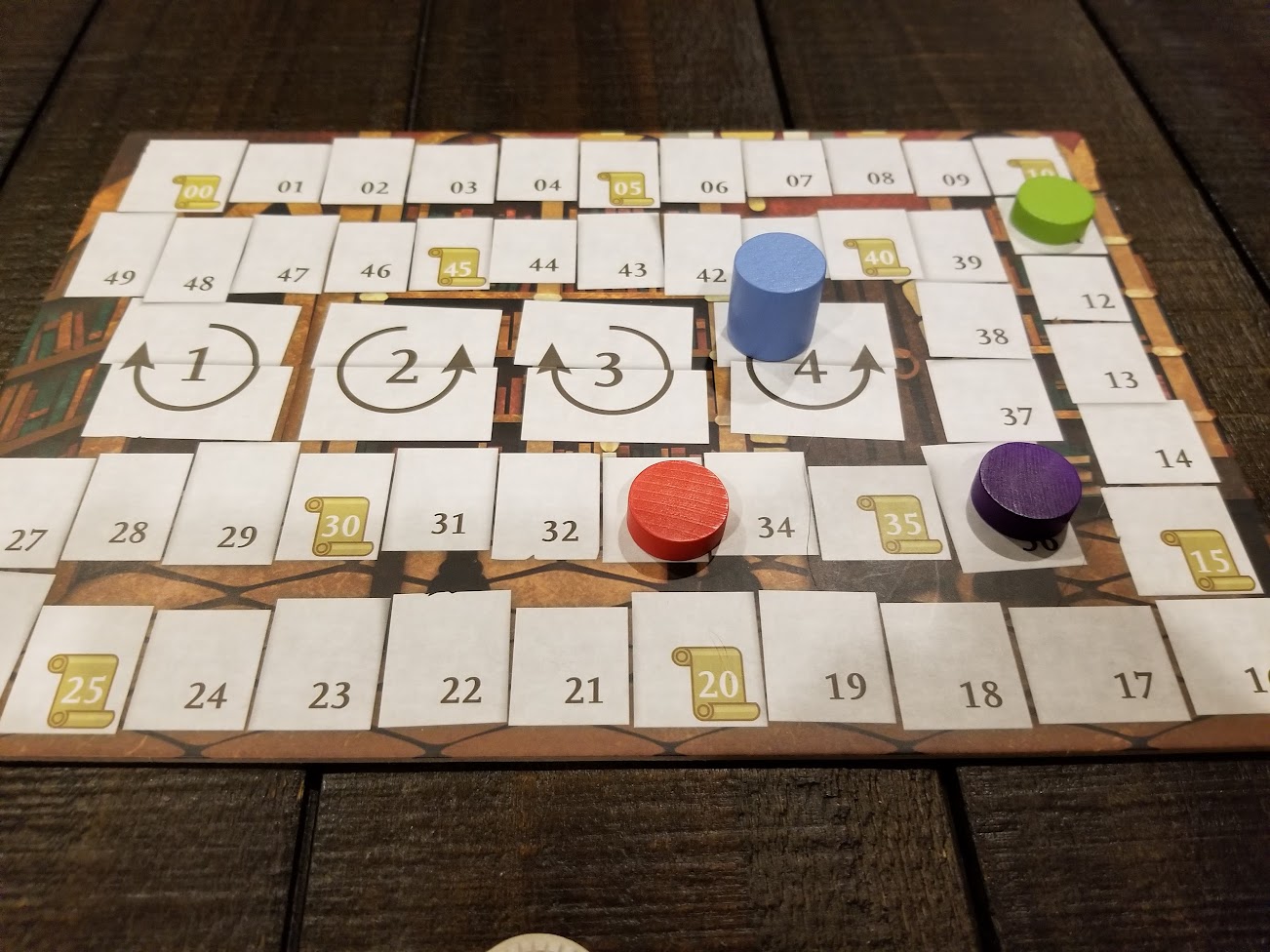 So that’s the frosting, as I like to say. But how does the cake taste?  Pretty good, actually. Paper Tales  is an easy to learn, quick playing, card drafting game that consists of a series of four rounds; within each, players complete the following actions:

[5] construct buildings and pay any associated costs in gold

I’ve played Paper Tales at all player counts and it was enjoyable every time. I was especially keen to try a two player game, as I’d seen a lot of questions online as to whether it could sustain interest with so few players. It can. I loved the zero sum feel of the player vs player game and I felt I had more control over the outcome as compared to plays at higher player counts.

Paper Tales  did not bring on any serious bouts of analysis paralysis during our game plays, although occasionally when one is gifted with a beautiful hand it can be challenging to decide on just a single card to keep as required. Because of the variability provided by the card count (81 unit cards and 5 building cards to choose from) and the randomness introduced by a well shuffled deck, even when players become familiar with all of the cards, there are enough permutations of units and constructed buildings possible that the game has strong replayability.

What we like most about Paper Tales and what makes it stand out in a crowd of card drafting games is the complexity of the interaction between cards given the shorter playing time.  It opens up many paths to victory and forces players to weigh the card combinations they’ve already put in play or plan to deploy against the possible alternatives. Other games featuring card drafting pull this off (Terraforming Mars comes to mind) but they tend to be longer playing games where the complexity unfolds over hours. It’s impressive that Paper Tales can pack that much depth into 30 minutes.

Publisher: Stronghold Games
Players: 2-5 (We played with 2, 3, 4, and 5)
Actual Playing Time (vs the guideline on the box): About 30-40 minutes per game
Game type: card drafting, hand management