Paper Tales: Beyond The Gates

Beyond The Gates provides 20 new unit cards (13 different cards, some with multiple copies), 30 new building cards (6 different buildings, 5 copies each), 7 building tiles that allow for the randomization of building selection during game setup, components for a 6th and 7th player, and components for solo play. All components and artwork are of the same high quality as in the base game.

Let’s walk through all of this game goodness, starting with a roundup of the new unit cards.  The most expensive of the new cards is the Princess, which single handedly brought my husband back from his trailing position in our last game. Coupled with a powerful building strategy, it can provide double digit bonuses during each round. The Lost Soul offers up 7 legend points upon its death. A beautiful card to draft, so long as you are able to grab it before the last round. The Noble nets up to 10 legend points when it is deployed and that can be triggered up to two more times if combined with both copies of another new card from the expansion – the Shadow - which I’ll touch on in just a bit. As for the Relic of Light, it has the potential, when deployed in combination with other Relics or other cards that forestall death on one or more units, to boost Legend points by 4 each round. 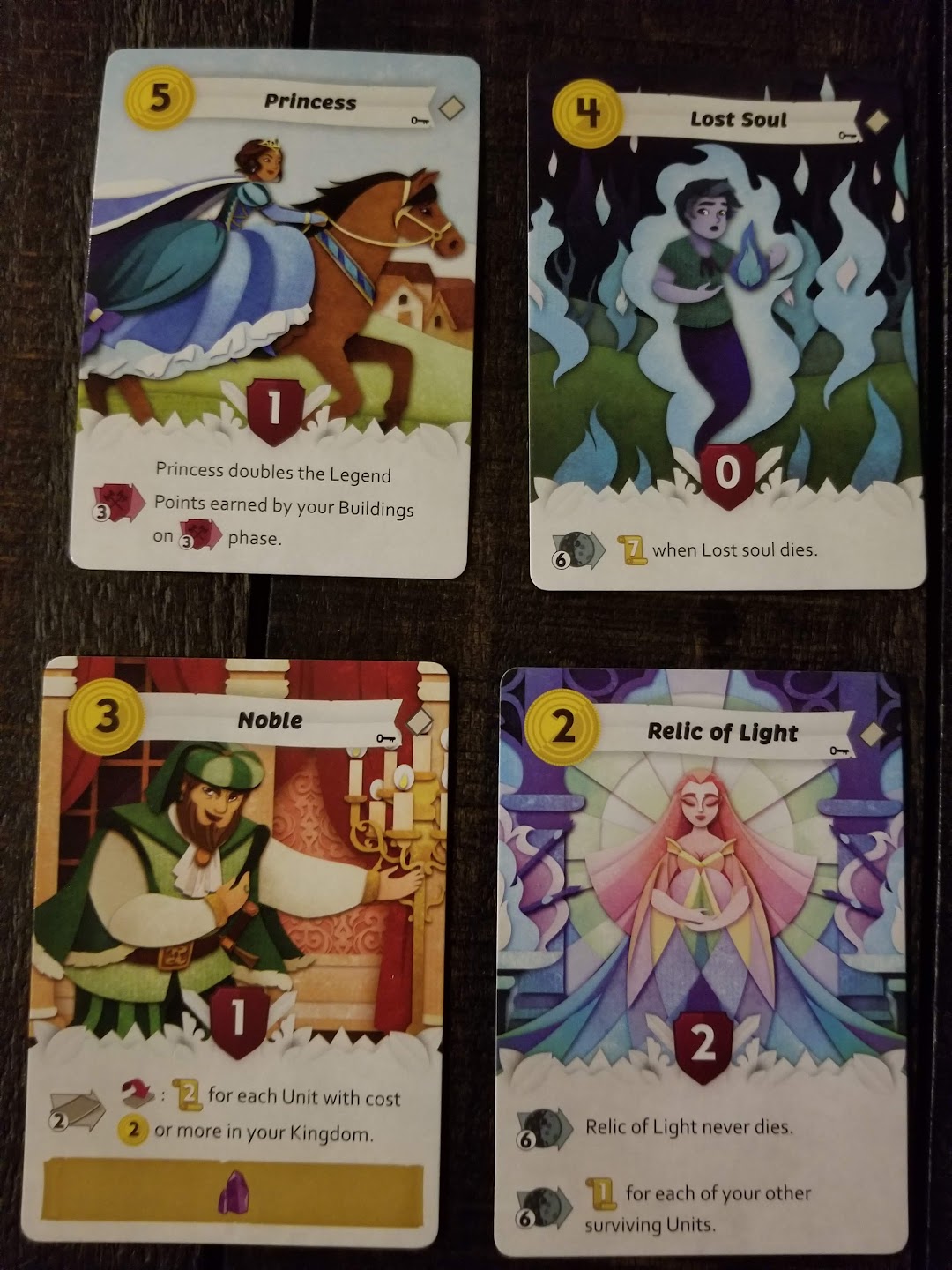 The Grand Intendant provides a decent amount of war strength, a direct cash boost when deployed, and also serves as a source of food (which gives a strength bonus when deployed in combination with the Manticore, a gold bonus when played with the Smuggler, and legend points when used in conjunction with various buildings). The Relic of War can be deployed with the Young Sorcerer or other cards that lead to the buildup of aging tokens to boost strength and award legend points. Jinn allows for free upgrades of a building and also provides gold. Like other cards with deployment bonuses, it can be retriggered by the Shadow.  Its requirement to place an aging token seems like a penalty but can cleverly be used in combination with the Relic of War for additional benefits. I’ve relied on Jinn in almost every game of Paper Tales I’ve played since adding in the expansion and it’s one of my favorite cards. The Jeweler provides ore and gold and smidgen of battle strength. 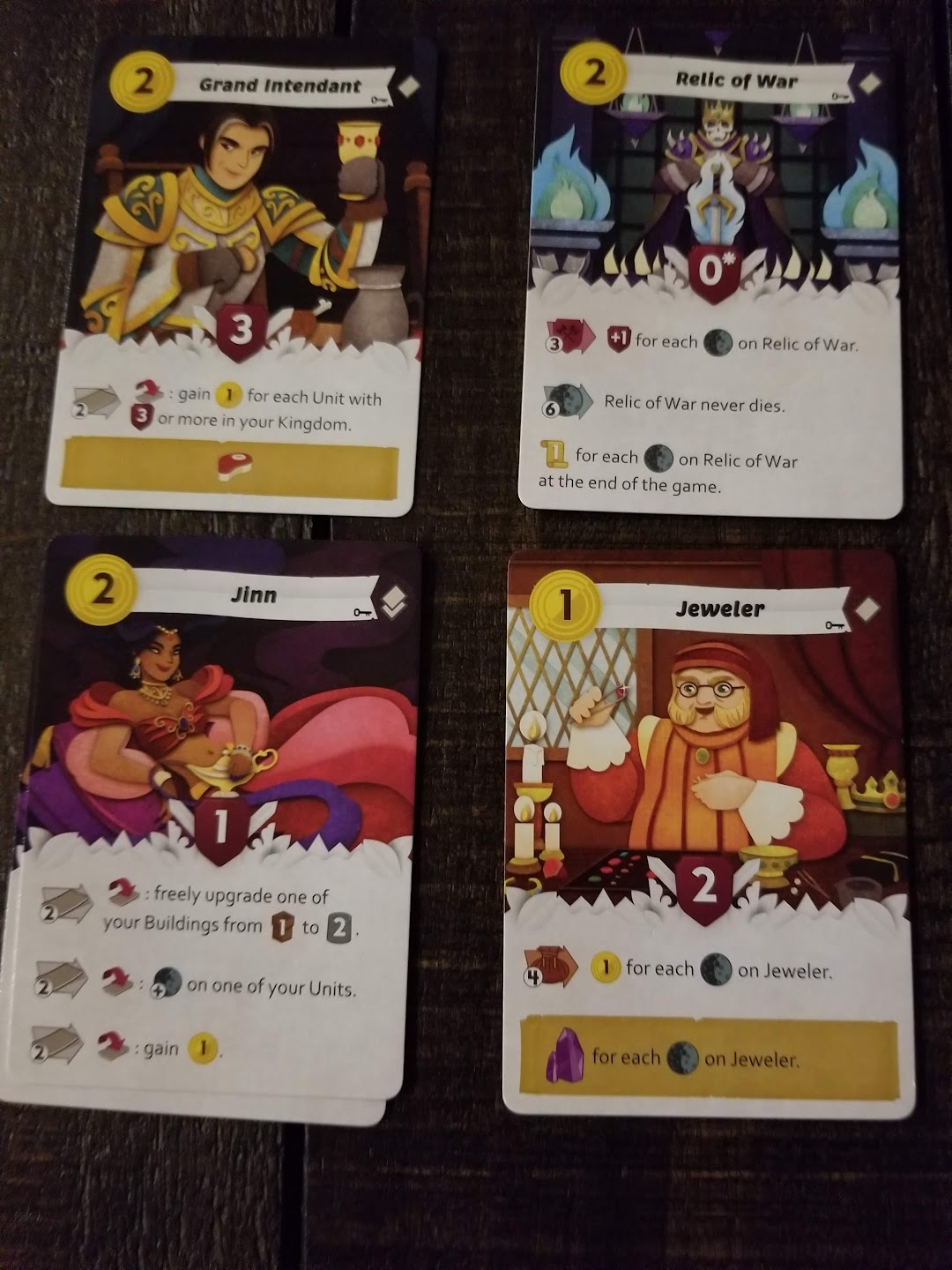 The Shadow is a fantastic card and I try to grab it whenever I can. It only costs one gold yet can be used to retrigger powerful deployment bonuses on top of its battle strength. My favorite move to pull off if I draft the Shadow is to bank it and wait until I am able to draft the second copy of the card. Then I deploy the Shadow on the same turn as a card with a deployment bonus such as the Noble, then deploy the second copy of the Shadow on my next turn to trigger the deployment bonus for the 3rd time. One, two, three, BAM. Takes my opponent by surprise. The Dryad is a card I’ve made use of several times as I tend to accumulate a wood surplus and this card plays off of that, as well as providing battle strength. There are two zero cost cards in the expansion and they are the Young Sorcerer and the Smuggler, whose strategic use I’ve already outlined. 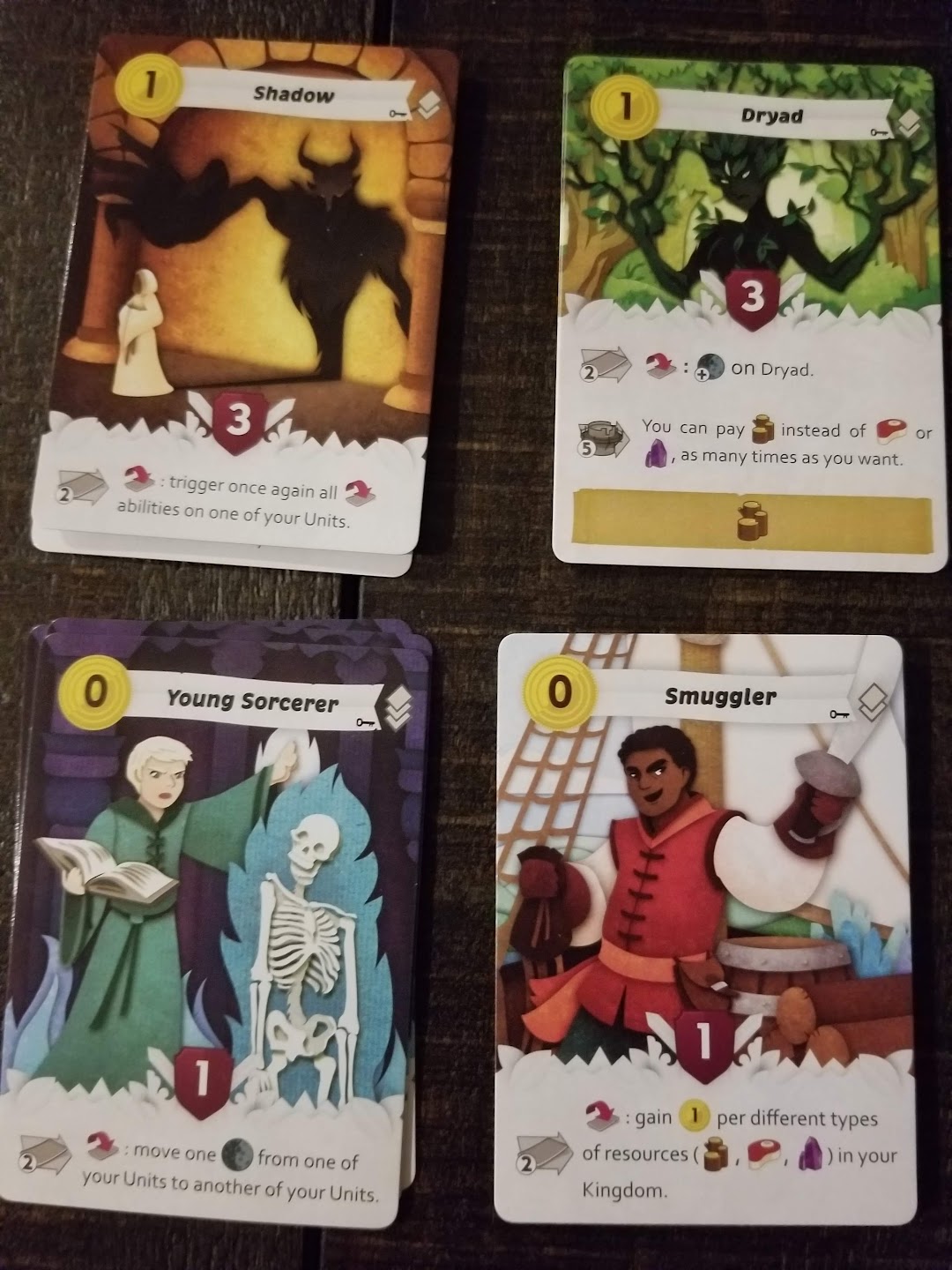 Last but not least, I present the Imp. This card gives you two gold at deployment and two battle strength but you better use one of those aging token shifter cards to avoid a 2 legend point penalty. Not worth it if you ask me. 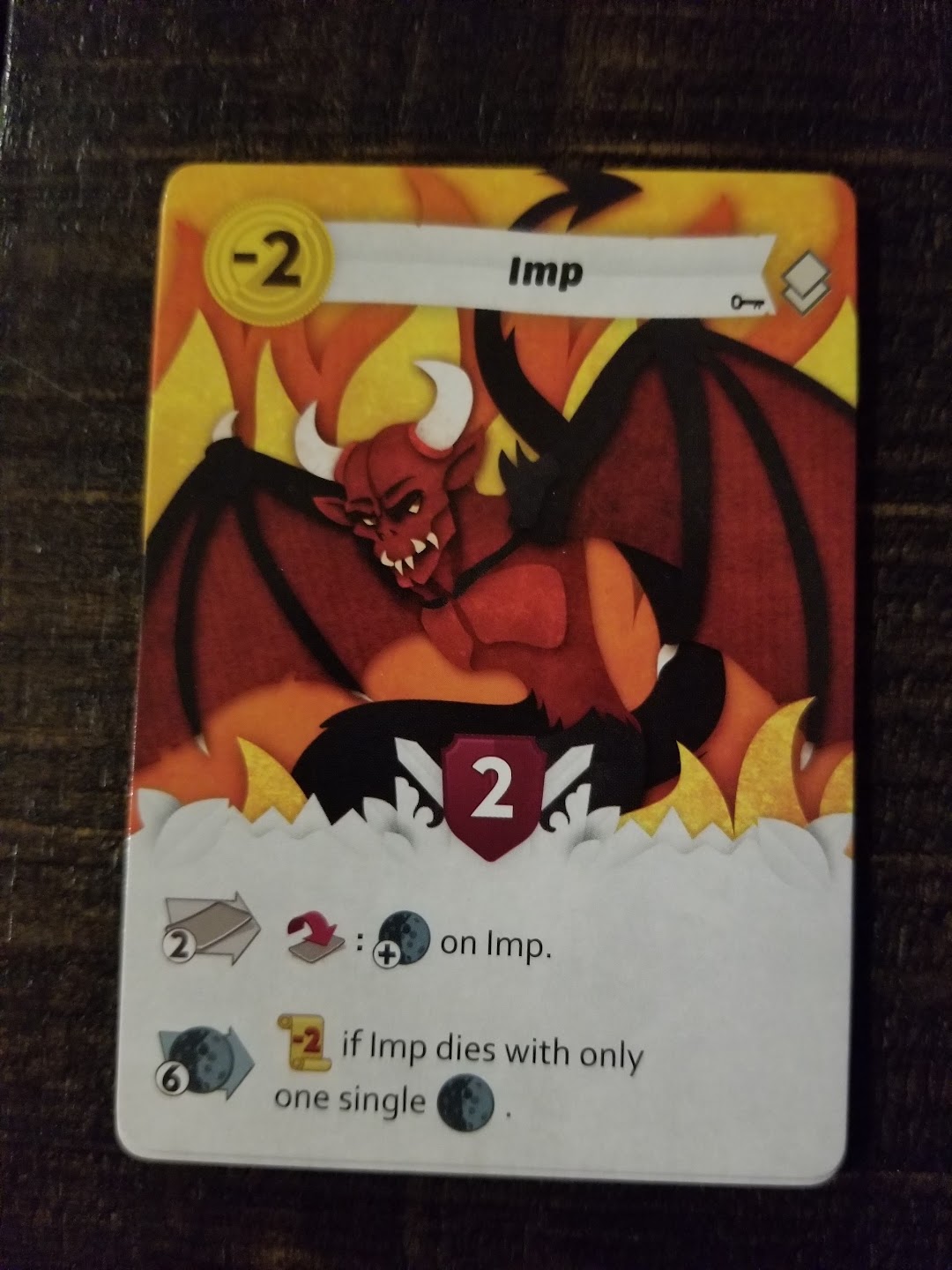 The new unit cards would be reason enough to spring for Paper Tales : Beyond The Gates  but there’s more in this expansion still to cover. Next up: the new building cards, which are shown below. I really like these clever additions. My favorites are the Port (which offers up to 6 points each round) and the Back Room (which makes constructing level 2 buildings a breeze).  I am a bit indecisive about which buildings to make available in each game (since so many of them seem like good strategy choices) so I am glad Stronghold included the randomizer tokens to make the selection for me. 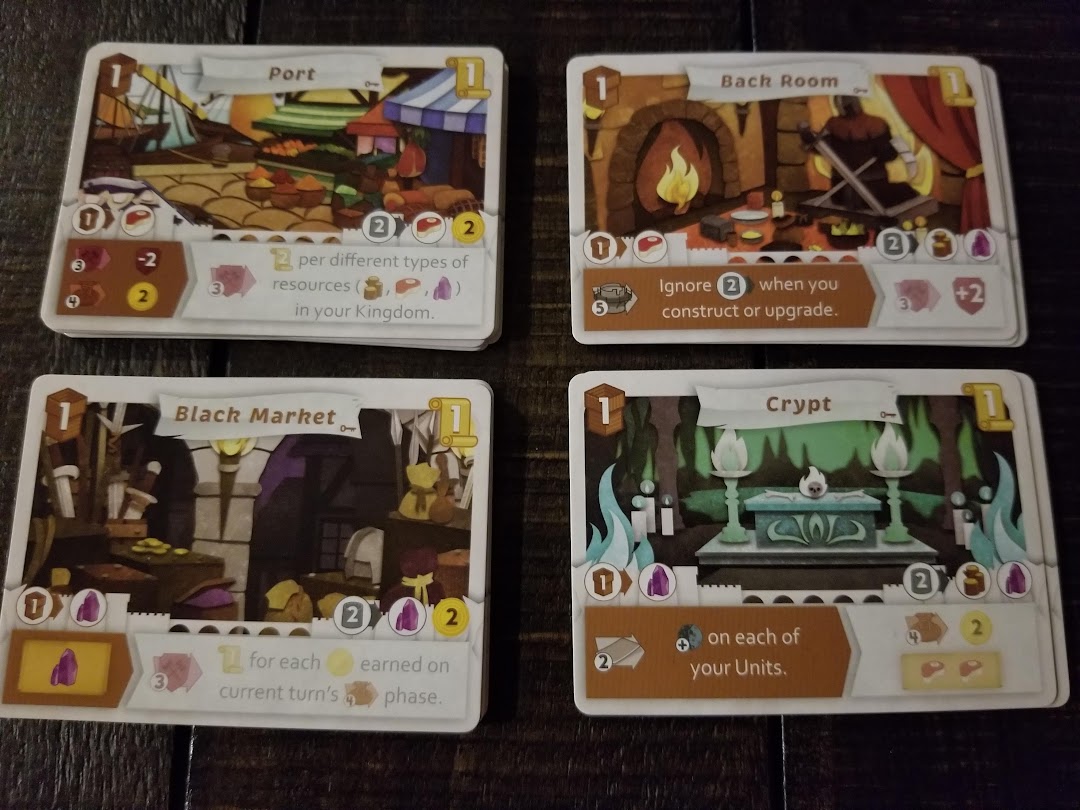 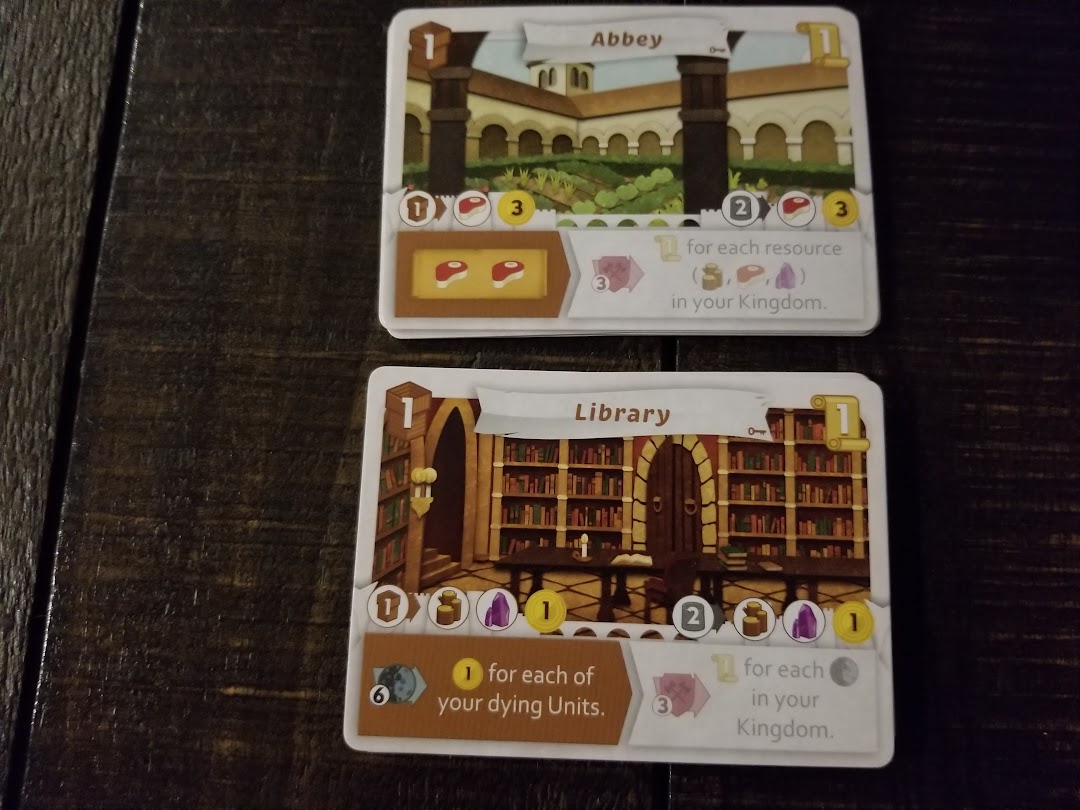 I took a little time one afternoon to play a few games of Paper Tales in solo mode, made possible by this expansion. In this mode, you’re pitted against the Lich King, whose battle strength and legend point bonuses each round are determined by values on the new Necropolis cards. You draft cards for yourself, then pass your leftovers to the Lich King before facing off in battle. Lich King cards can be employed to increase the difficulty level of the game. I felt the game in solo mode was able to mimic the experience of playing against a live opponent and was neither too easy nor impossibly difficult. I will definitely play again. 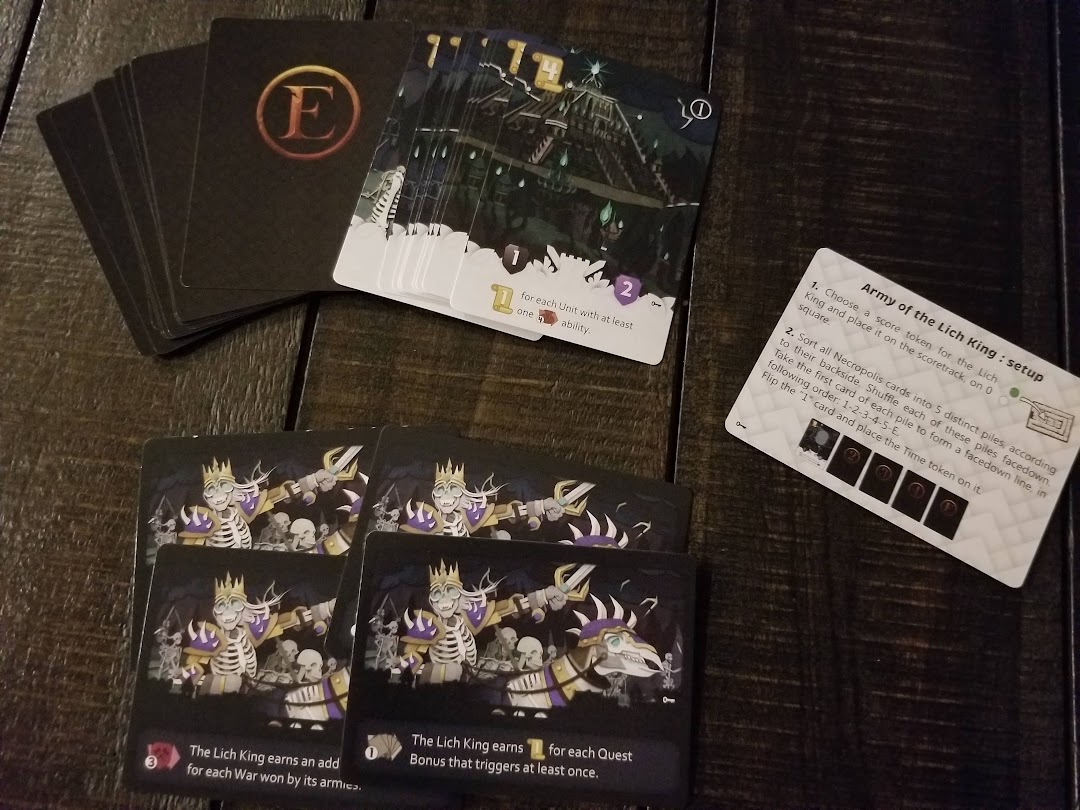 It’s not a stretch to say that Paper Tales: Beyond The Gates doubles the value of the base game. I would automatically include the expansion in any purchase of Paper Tales I made with the intention of giving as a gift to a friend or family member. And if you’ve got Paper Tales in your game library already, you’ll want to pick up Beyond The Gates for yourself.

Publisher: Stronghold Games
Players: 1-7 (We played with 1,2, 3, and 4)
Actual Playing Time (vs the guideline on the box): About 30-40 minutes per game
Game type: card drafting, hand management