January 30, 2012
On May 13, 2010, NoVA Travelers dashed off to Colorado Springs for an active weekend of  outdoor activities. We flew into Denver and rented a car for the jaunt to Colorado Springs where we bunked down for the night.
In the daylight of morning, the city revealed its beauty. Pike’s Peak overshadows the entire city and provides a scenic backdrop for the everyday goings-on of its residents. 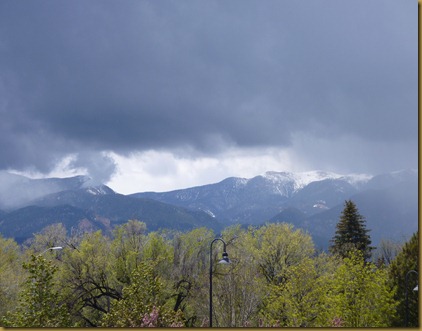 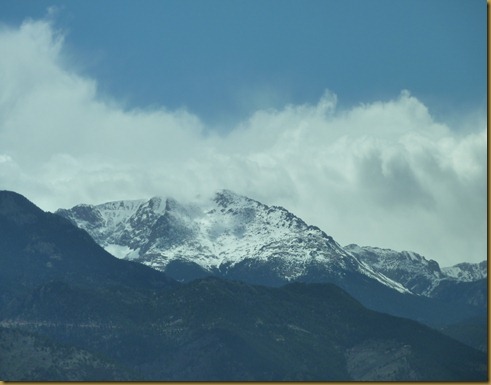 Views of Pike’s Peak as seen from Colorado Springs

We treated ourselves to breakfast at Crepe Francaise downtown. Great little gem nestled among an otherwise run down avenue. Everyone had a little free time to explore on their own before we headed out as a group to Garden of the Gods for hiking. The land was donated to the public in 1909 by the family a local landowner and exhibits several unique geological structures. We took several pictures and tackled a few trails (such as the Siamese Twins) before the rain began to come down and forced an early exit from the park.

Panoramic vista of Garden of the Gods 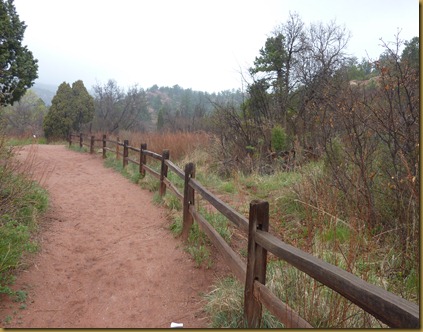 Trail to the Siamese Twins 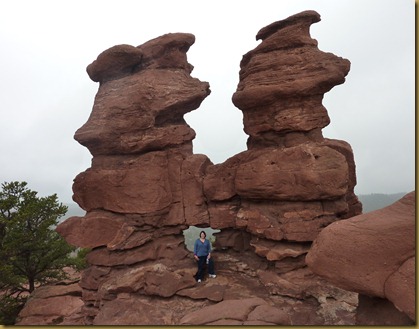 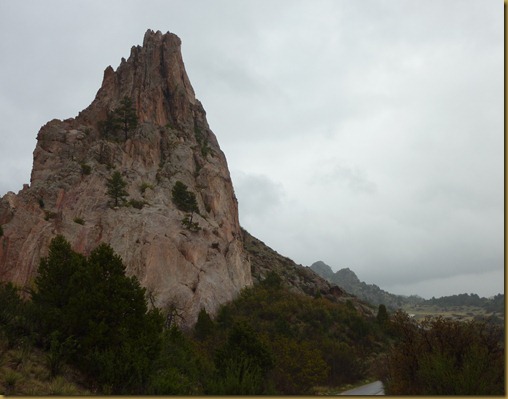 Dinner that evening was at House of Saigon - small hole in the wall Vietnamese joint that came highly recommended from Tripadvisor.com. The place looked pretty dingy when we arrived and service was subpar but the food was phenomenal. I ordered the Pho and was not disappointed. If you drop into Colorado Springs I definitely recommend you carve out time for a meal at House of Saigon.
Saturday we spent the morning on Pike’s Peak mountain – climbing up it in a scenic railcar of the Pike's Peak Cog Railroad. Because of the wind and snow conditions the railroad had to stop short of the mountaintop station, falling back to an ‘almost there’ point instead. Regardless the ride was beautiful and Colorado has now become the state that first comes to mind when I think of where to find snow at the wrong time of the year (as we saw snow on our August trip to Denver last year as well). Disembarking from the return we officially graduated as the most recent class to ride the highest cog railroad in the world! (We’ve previously ridden the first cog railroad ever built in the world @Mount Washington in New Hampshire). 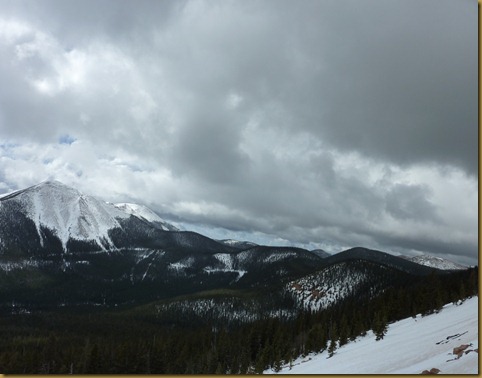 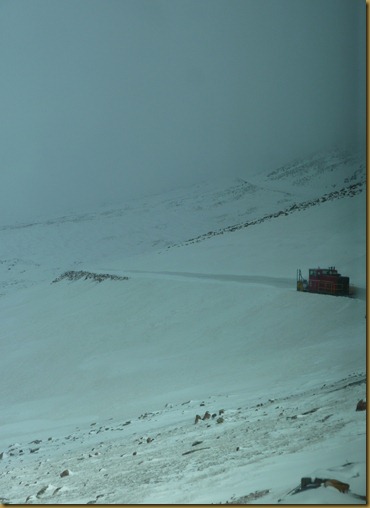 The snowplow train up above us clearing the tracks for us 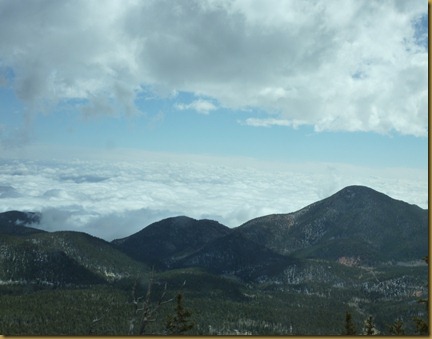 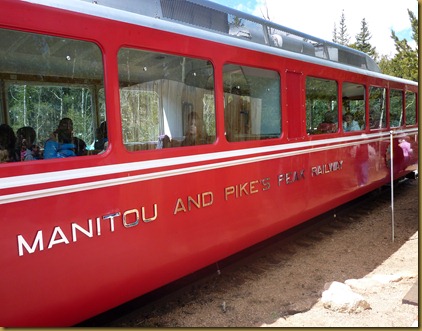 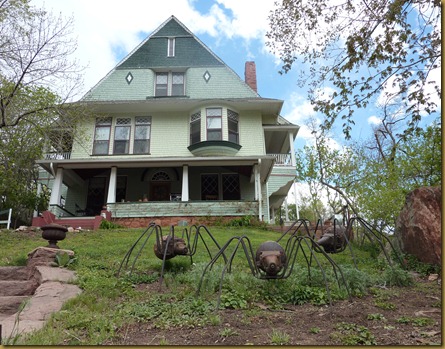 Houses in Manitou Springs are a bit..uh…original..in their decor

After a lunch at a pizza place in downtown Manitou Springs (the little tourist trap town where you pick up the railroad) we returned to Colorado Springs to tour the Olympic Training center. (By the way it was tasty thin crust pizza at a small Marilyn Monroe themed cafe and if you can track it down you should visit).
The center has several educational exhibits and includes a tour of the grounds. Here’s the kicker: they won’t take American Express in their gift shop as a marketing matter of principle. What? That’s crazy! Here I was, arms loaded up ready to buy gifts and they turned me and my AMEX away.  The sales clerk lowered her voice and said she could slyly and quietly take mastercard but never could she sneak past an AMEX card. Whatever crazy lady, whatever. This especially irritated me b/c I ran into the same deliberate marketing monopoly ploy at the Kentucky Derby and since I don’t have a visa card I’m out of luck. Conclusion: Visa corp is evil. If you want their sponsorship you must play by their rules and cut out AMEX from your organization as if it were a dirty cancer. 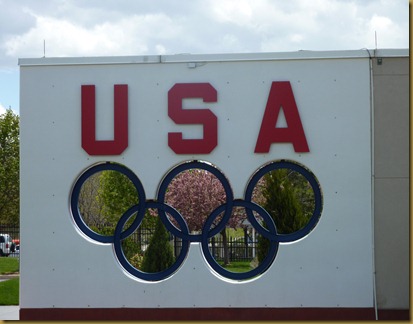 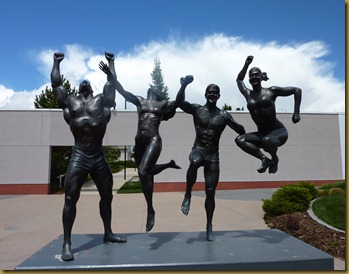 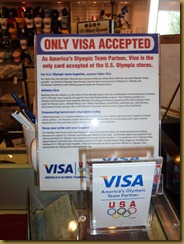 Images from the Training Center

We enjoyed dinner that evening at The Warehouse Restaurant (again in downtown Colorado Springs). Just like it sounds, it’s housed in a previously industrial space. They’ve got some excellent game meat entrees on their menu which always draws my attention and our group had fun sharing our meals and sampling from each other’s plates.
Our final day in the area (Sunday) was spent at the Royal Gorge.  A couple of hours outside of Colorado Springs, the property boasts the tallest suspension bridge in America, the steepest funicular, and the longest cable car ride. Fantastic. We walked over the bridge (the views are amazing) and toured the animal zoo on the other side (we saw a man riding a longhorn cow!) before returning on the cable car. Then we went down the funicular to the riverside and watched a train and white water rafters cross by as the scenic helicopter tours progressed overhead. All in all a fun day. 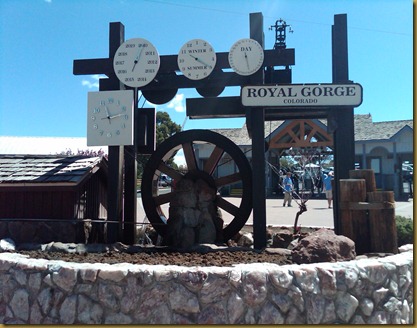 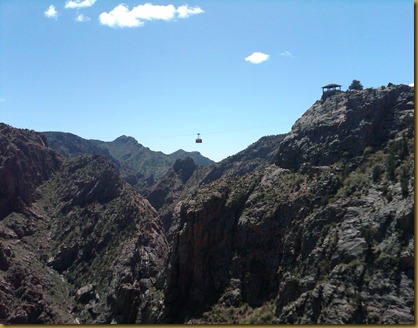 View of the cable car crossing the gorge 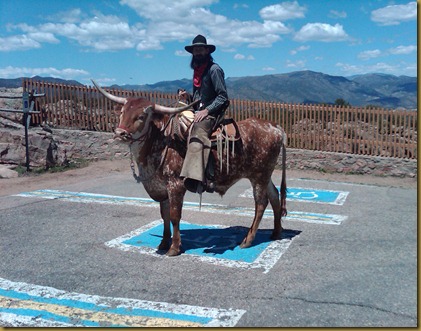 Man on a longhorn..you don’t see this everyday 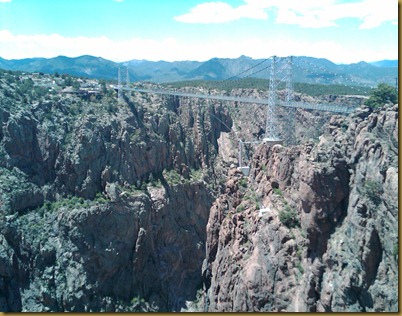 Suspension bridge over the gorge with the mountains beyond

We were treated to a home cooked dinner at the home of my husband’s brother and family (they live in Colorado Springs and we were happy to have the afternoon to spend some time with them) before we had to leave for the airport. Their house is nestled on one of the many hillsides and the wild deer walk right into their yard in broad daylight and lie down. No fear of people whatsoever. I’m an animal lover so that was a special treat for me to count at least seven in various stages of grazing, sleeping, and walking round the neighborhood. There were also bunnies everywhere. 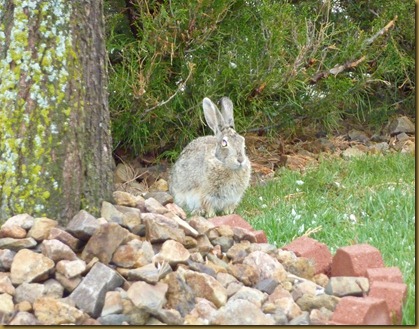 We’d love to take the group back to Colorado Spring during the peak of summer to visit Seven Falls and other scenic outdoor hiking areas. You can keep an eye on our group calendar to see when the next Colorado Springs trip is scheduled.

Suzanne said…
Another great report, I will definitely try some of those places out when I am in Colo Springs in March.
December 8, 2012 at 8:47 AM

Suzanne said…
Just popping in to make sure Im not forgetting anything on my Colo Springs agenda.
March 8, 2013 at 11:46 AM