I don’t play too many battlefield war games. We have a handful in our collection, but most of them are unopened and gathering dust. They are daunting multi-hour campaigns focused on traditional historic battles that my husband purchased on a whim but hasn’t found the time to play yet and I feel a bit intimidated by them so in shrink-wrap they sit and wait. Also, my tastes tend to gravitate toward fantasy themes so when I’m choosing games with combat to bring to the table, anything with historic characters is likely to be passed over in favor of elves or wizards. I suspect this description fits not only myself but a lot of my review readers, especially the female cohort. But it’s a new year and time to break out of my comfort zone. I’ve decided to give at least 5 battlefield war games a try this year and I’m starting with Battle Ravens. It’s a lightweight war game designed by Dan Mersey and published by Plastic Soldier Company. PSC funded the game on Kickstarter in November 2018 but you can still pre-order the game through PSC’s website: https://daniel-merseys-battle-ravens.backerkit.com/hosted_preorders. 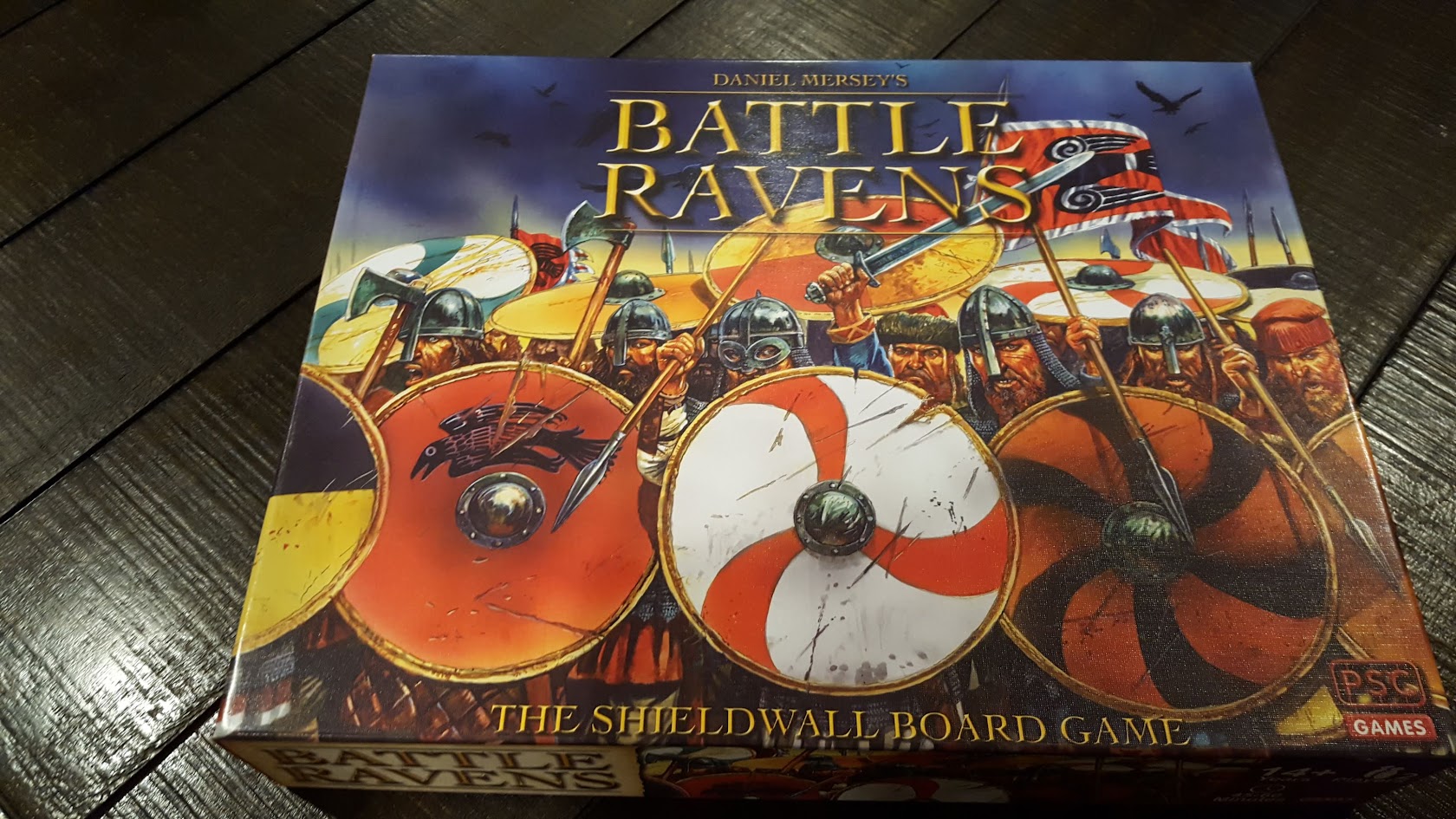 I chose Battle Ravens as my first dip into war games because it plays quickly, supports two players (many war games are designed exclusively for solo play and I’m not into playing a game by myself for hours on end), and isn’t overly complex.

The artwork in Battle Ravens consists of illustrations with clean lines in a traditional color palette that reinforces the game’s theme of Viking age warfare. The components include cardboard cutouts for the warriors (members of the Norse and Anglo-Saxon armies) with plastic stands, standard dice, and a simple battlefield playing area made out of heavy cardboard. I was a bit disappointed that PSC didn’t invest in custom dice for this edition (note that the dice pictured in the image below are some from my personal collection and not the standard dice that came with the game). It’s more fun to see the success and failure symbols that carry the theme forward printed directly on the dice instead of having to translate the meaning of ordinary pips. 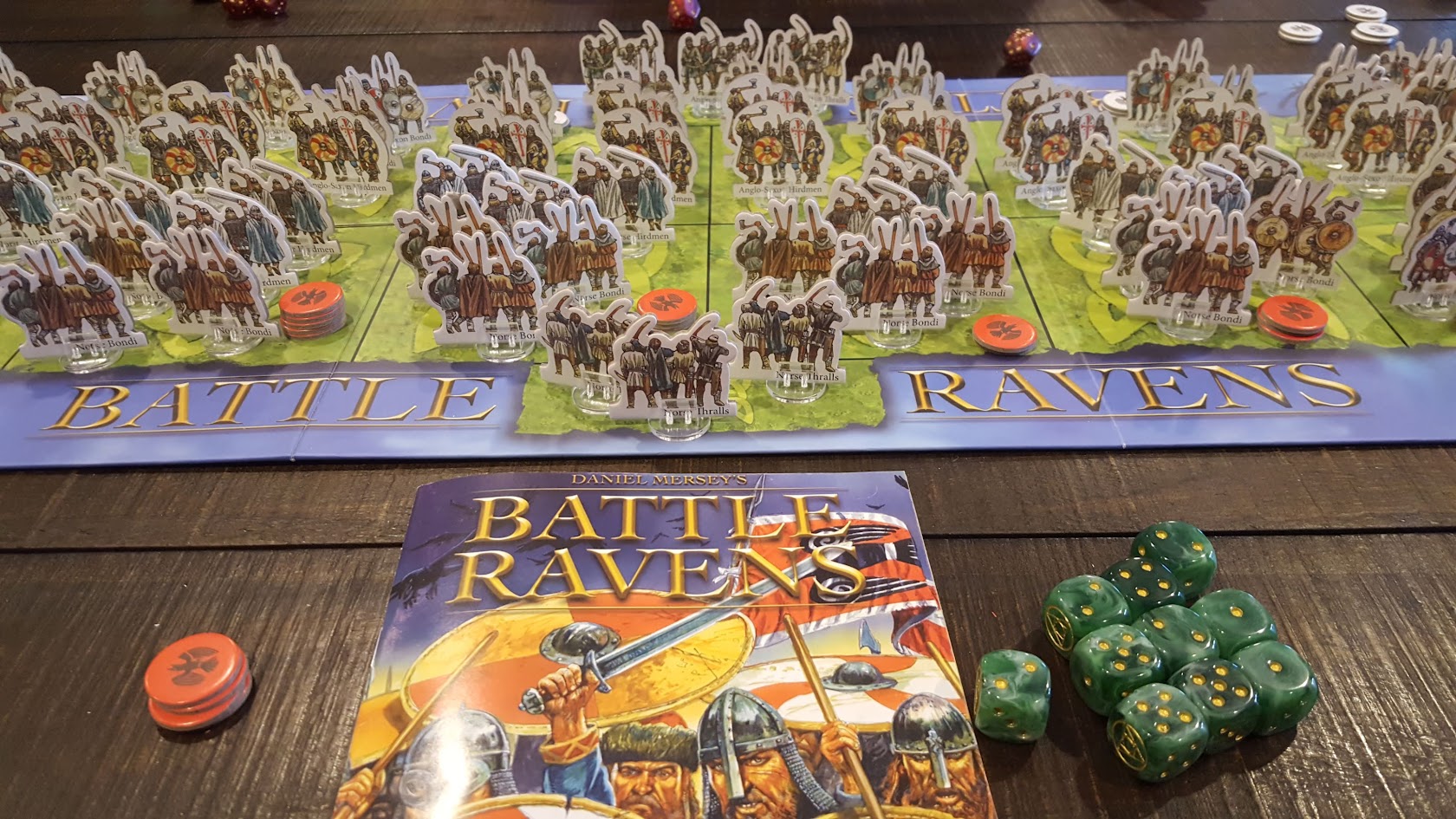 The gameplay in Battle Ravens is heavily luck based, with dice rolls determining battle success or failure. The strategy comes into play with the placement and use of raven tokens to allocate move and attack actions to different sectors (called shieldwall areas) of your battlefield and moderate warrior movement and attack strength . Other components which provide strategic influence include thralls which can be used to re-roll dice, and tactic cards which can be used to modify the rules in one’s favor.

At the beginning of each round, players take turns placing raven tokens, one shieldwall area at a time. Each token you place in a shieldwall area can be used later during the action phase of the round to move one warrior to an adjacent shieldwall area on your side or attack your opponent’s shieldwall area directly across the board with one die. Players must commit these tokens to the areas without any certainty of how many they will need to gain the upper hand over their opponent and once placed they cannot be reallocated or added to during the round.

Once all raven tokens have been placed, the actions phase of the round begins. In this part of the round, players alternate turns activating shieldwall areas and then moving or attacking from that area. On your turn, you may use as many or as few raven tokens as you wish from the pool that have been allocated to the shieldwall area you’ve activated. For example, six raven tokens in a shieldwall area affords you the ability to move up to six warriors or roll an attack with up six dice. After you’ve performed a move or attack action, on your next turn (if you select this shieldwall area to activate again), any of the number of remaining raven tokens (#n) in the area can be used in the same manner to allocate movement or dice for up to #n warriors/dice.  Raven tokens can also be consumed to defend against opponent attacks, and just as with attack rolls, each token consumed allocates one die for the defense roll.

Once all of an opponent’s warriors in a shieldwall area have been destroyed, your warriors in the facing area move into the opponent’s area and claim it. The first person to claim 3 opponent shieldwall areas wins the game. If no one has won the game after all raven tokens have been consumed by performing actions in the first round, a new round begins.

Battle Ravens is not subject to much analysis paralysis (AP). I’m the queen of AP and yet I was able to work through my turns without much hesitation. Part of the reason for that is the randomness introduced with the dice rolls. I didn’t mind how strongly chance is weighted in the game but it might be a turnoff for fans of heavy strategy games. That influence of luck could have easily been mitigated by tying the number of warriors in a shieldwall area to the potential outcomes of attack or defense rolls. It only makes sense that the number of men in your army would have an impact on battle success, so perhaps the game could be improved by using warrior count as a multiplier of the dice roll outcomes. To be fair, the strong bent toward random chance means the game is highly replayable as the unpredictable nature of play keeps things interesting.

I’m going to keep Battle Ravens in my board game library and will play it again. I think it would be especially good to play with teens as a lighter introduction to historical war games.