The Shipwreck Arcana: Stars Below

Christopher: Guest reviewer here! I’m Jenni’s husband, Chris. It fell to me to review The Shipwreck Arcana: Stars Below mini-expansion for two reasons. First, I was the impetus for getting the game originally . Second, Jenni thought the base game was just ok, while I thought it was a really good and beautiful cooperative logic puzzle. Her original review is here; if you have not played the base game you’ll want to pause here, read the original review, and return to this page as I will be using game terms and concepts with the assumption they are familiar to you.

So, what does the mini-expansion contain? At first glance, it might seem relatively small with just five Arcana cards, but since the base game has 20 Arcana cards, that’s a 25% increase, which isn’t small at all. Each Arcana card in the base game has beautiful artwork, very much like an alternative universe deck of Tarot cards. The five new cards in this expansion maintain that style of artwork, so if you were a fan, you’ll be happy. 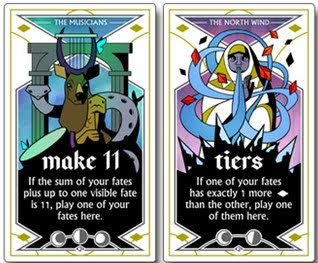 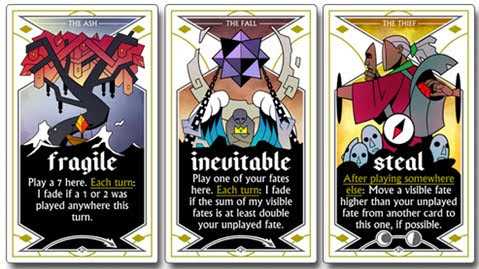 The change in content for The Shipwreck Arcana: Stars Below  is substantial. There are two new mechanisms introduced in the new Arcana. The first is mandatory action. Tree of the new cards (The Ash, The Fall, The Thief) have gold text. The gold text indicates something mandatory that must be evaluated or completed involving fates on each turn. Even if you don’t play a fate directly on one of these Arcana, they still could fade, depending on what is displayed on the board. That leads to the second mechanism, which is variable fade conditions on two of these three new cards. When these mandatory actions are coupled with the active player’s decision of which fate to play, the logic puzzle given to the remaining players can be wonderful. For instance, The Thief has the following language “After playing somewhere else : Move a visible fate higher than your unplayed fate from another card to this one, if possible.” Depending on the visible fates, an enormous amount of information can be conveyed. There is a strong push for a player to play their lower fate on the board and keep their higher fate hidden, if that would result in no movement to The Thief card. However, if a two fate is showing, and your hidden fate is a one, you can immediately indicate to your fellow players that you have a one in the hole by playing your other fate and then moving the two to The Thief.

That’s really where The Shipwreck Arcana: Stars Below  shines as a game—the dynamic between the active player trying to give as much information as possible to the other players and the other players discussing and thinking through all of the possible permutations of why the active player chose to do what they did. For those of us who love interactive cooperative puzzles, it’s amazing!

The other two cards in this mini-expansion (The Musicians and The North Wind)are more in line with the original Arcana—i.e., more mathematically straight-forward card descriptions.

The faded card powers that are on the five new cards are also somewhat of a departure from those in the base game.

Two of those powers, Help (which appears on the back of 2 different cards) and Exile, are considered so powerful that players must discard the faded card AND an additional faded card to activate them. The other two powers, Slow and Amplify, allow for creative plays thinking outside the box in that the first, after being attached to an Arcana card, makes the fates in front of that card worth only one pip, and the second increases the Arcana card that replaced it by one for doom and one for predictions.

If you like logic puzzles, but would prefer that they are interactive, constantly changing, and cool to look at, adding The Shipwreck Arcana: Stars Below  mini-expansion to your board game collection is a no-brainer.