Board Game Review–Cities: Skylines –The Board Game

We got Cities: Skylines – The Board Game  a couple of months ago and I really didn't know what to expect before my first play. Sometimes there is a game on the horizon that's all the buzz in my circles and I'm super excited to order it, get it home, and get it on the table. Other times, it's my husband who catches the fever for a game and brings it into our house. And every now and then, a publisher asks me to review a game I've never heard of and haven't built up any anticipatory excitement for yet. Such was the case with Cities: Skylines – The Board Game. The team at Kosmos sent this cooperative game my way and asked me to give it a try. It’s designed by Rustan Hakansson (other works of his I am familiar with include HexRoller and Tribes: Dawn of Humanity) and based on a video game of the same name that’s popular across multiple platforms (Nintendo Switch, Xbox One, & Nintendo Switch).

I remember opening the box for the first time and setting everything up. The box cover art is nice but the rest of the artwork (provided by the German design studio Fiore) is easily described as adequate. We're not handing out any awards here for most beautiful game, is all I'm saying. I thumbed through the rulebook as we readied for our first game and at least that was a win - I found it to be concise and well-written. I especially liked that the rulebook author made a point to highlight that even though Cities: Skylines – The Board Game is a cooperative game where it's important to collaborate, it is up to the active player to make the decision on their turn. Way to nip that Alpha gaming in the bud!

Once my husband and I started playing the game, I quickly realized it’s very different from other games. It gives me the same feeling of zen as putting together a Stave wooden jigsaw puzzle. We’re not battling a monster or racing against the clock or trying to fend off a pandemic. We’re urban planners, carefully and thoughtfully placing building tiles into our city districts in an effort to score the most happiness (points) possible by the game’s end.  Very relaxing, yet still intellectually challenging. 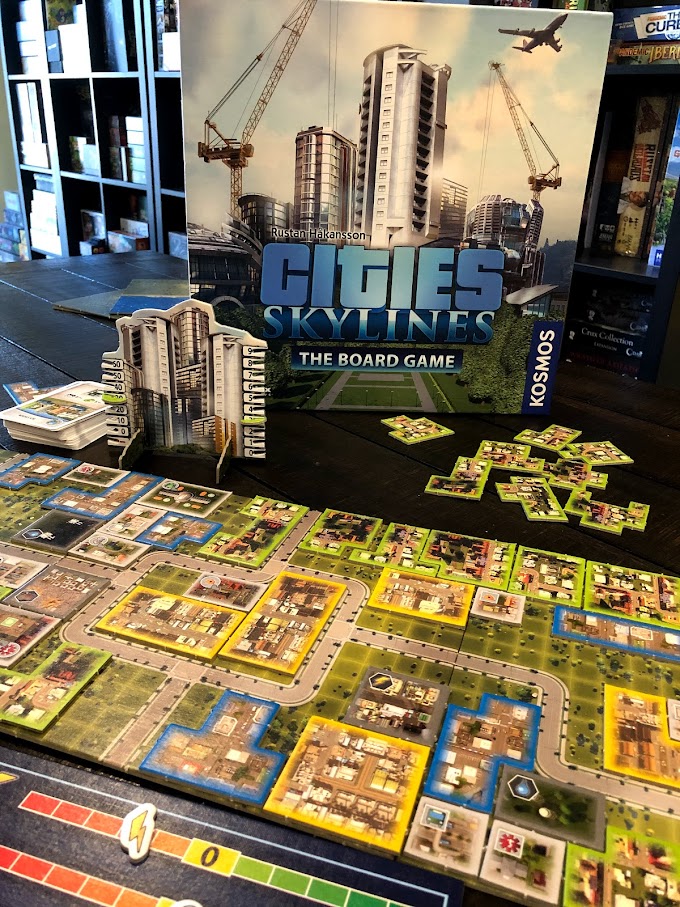 The game begins with players selecting a set of game board tiles (4 unless you are playing the introductory game with just 3) and arranging them facedown. One of the tiles is flipped over (there is a $$ cost associated with flipping each tile, which is deducted from the starting city treasury funds) and development may begin. Each tile is divided up into districts, formed by the street borders, and all construction takes place within these districts. When new city game board tiles are flipped over (at checkpoints - called milestones - that may only be triggered once every district visible has a building constructed within it), land surfaces must face up against land surfaces and water must face water.

To build out the city, players they use construction cards (dealt in the beginning of the game and also drawn each turn) to put up residential, commercial, industrial, utility, service, and unique buildings. 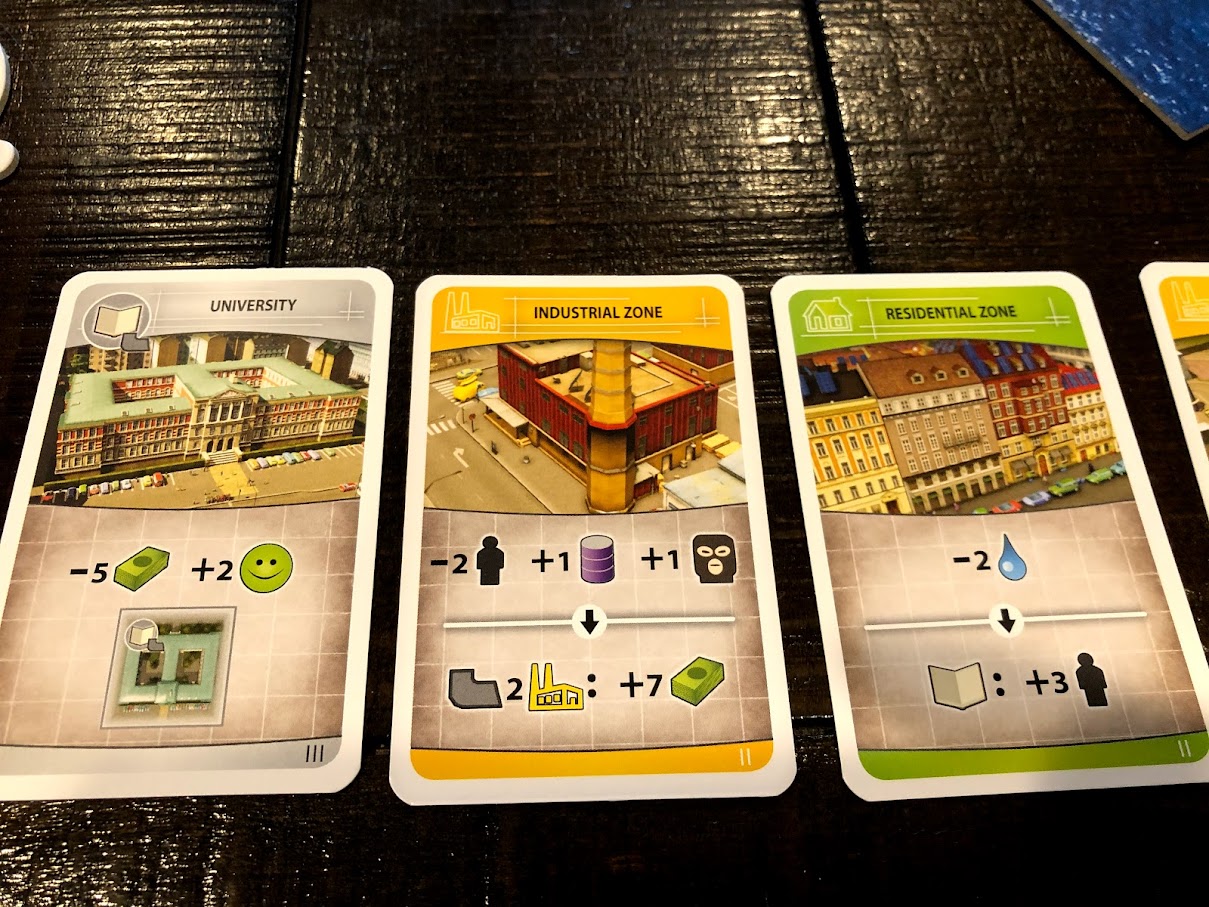 Placing buildings can trigger increases or decreases in the city treasury; utilities (power, water, garbage); employment; happiness; and negative externalities (pollution, traffic, crime). If the placement would trigger a decrease beyond what the planners have in the treasury, the building cannot be constructed. You also cannot construct a building if it would cause any of your utilities to drop below -5, cause any of your negative externalities to increase beyond 5, or cause your employment to go out of the range of -5 to 5. And while there is no cap on happiness increases, any construction that lowers your happiness beyond -4 ends the game with a loss immediately. At the milestone checkpoints, utility shortages decrease happiness just before the happiness is transferred to the main score track and at the end of the game negative externalities do so as well. So our first consideration in construction must be how it will impact all of these measures. 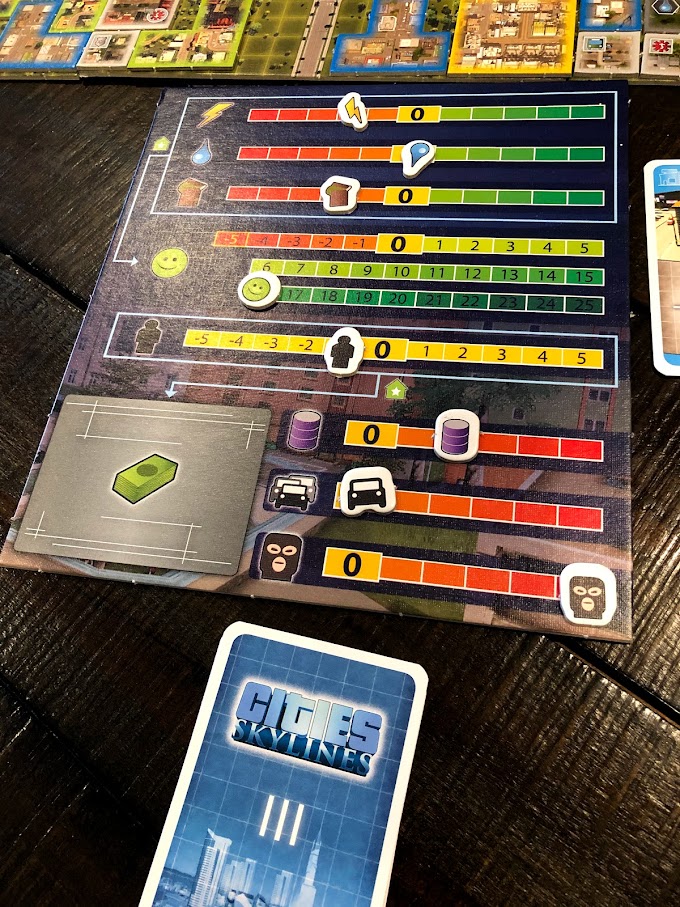 Several buildings trigger effects based on having met prerequisites. For example, building a residential zone might trigger an increase in the city treasury if you already have a park constructed in the same district. Or a building a commercial zone might increase the city treasury and happiness if you have both a park and a medical clinic in the district and you can place the zone adjacent to both of them. In order to get the most benefit from these types of constructions, planners need to carefully think and rethink building placement before selecting a building site and so this is a second consideration in construction.

When selecting residential, commercial, or industrial zones to build, there are a dozen or more tetris-like shaped tokens to choose from. Because buildings can only be placed in a district if they physically fit, and we want to maximize the number and type of buildings we can place into each district, a close examination of the shapes during selection is a third consideration in construction.

In addition to the game tiles, buildings, and construction cards, Cities: Skylines – The Board Game  includes role cards that grant special abilities to each planner, policy cards that provide a one time benefit when played, and news cards that add difficulty in the form of disadvantages. It’s recommended to leave these three card types out of your first game to keep things simple, but they definitely make the game more fun, so I’d recommend incorporating them into your subsequent games.

I want to make an important note regarding player count. The box notes that 1-4 can play Cities: Skylines – The Board Game but there’s no way I’d play this with more than 2 players total. We didn’t even attempt a 3 or 4 player game because it was easy to see it would be frustrating – just too many people to negotiate with on implementing a coordinated plan. I guess if you’re the type of person who would work on a jigsaw puzzle with 4 people at once, you might give it a try? But I’m definitely not that kind of person. As a 1 or 2 player game though, Cities: Skylines – The Board Game is great. We could all use more calm during this crazy COVID-19 pandemic and puzzle games like this one provide it.