Board Game Review–Exit: The Game–The Catacombs of Horror (spoiler free)

Let's take a moment to talk about the series Exit: The Game, which debuted in the United States in 2016.

Designed by Inka and Marcus Brand and published by Thames and Kosmos, the games are advertised as an Escape Room in a box. In an escape room, you and a group a friends are placed into a room (you may literally be locked in, depending on the fire code of the city where you book the room). Then,  a timer is set, a story is told to you to provide context and atmosphere for your puzzling adventure, and you attempt to solve a series of puzzles, the answers to which will eventually lead you to a key or combination to escape the room - hopefully before time runs out. These rooms typically book for $30+ per person, so the promise of replicating the escape room experience out of a tiny little box for a fraction of the cost is very appealing.

But does Exit: The Game live up to its promise? It does. It absolutely does, with one caveat - some of the games have you puzzling to solve a mystery within the time limit, but you aren't trying to escape anything.

Earlier titles in the series are fairly straightforward. A paper booklet of puzzles; a set each of riddle cards (pair with the booklet to solve the puzzles), answer cards (used to validate puzzle solutions and lead you to new riddle cards),  and help cards (hints for solving the puzzles); a decoder wheel (used to input codes derived from the puzzles); a simple rulebook; and various accessories (usually constructed of cardboard or paper) provide the core of the game experience. Players need to come equipped with scissors (destruction of components is required in nearly every game), pens/pencils, rulers, and a sharp wit to finish the game and calculate their score (measured in stars). The puzzle mechanisms vary, but they will be at least somewhat familiar to players who have done escape rooms or puzzle hunts before.  Depending on the title chosen, the puzzles also vary in difficulty. There is a difficulty rating printed on each box. We found that on average, we finish every Exit title in about 75 minutes; what varies for us across difficulty ratings is how many hint cards we lean on to solve the puzzles.

As the series has progressed in maturity, Inka and Marcus have been able to deliver titles with creative new puzzle mechanisms, changes in solving methodology (such as varying whether the puzzles in the paper booklet must be completed in sequential order or not), and meta puzzles. Meta puzzles are those which you cannot solve without getting a piece of the solution from some or all of the other puzzles included. For example, a puzzle that has you solve for a sentence comprised of words derived from other puzzle solutions is a meta puzzle. A good example of a title from the Exit: The Game series with a meta puzzle is Exit: The Game  - Dead Man on the Orient Express. It includes a meta puzzle that requires players to pay close attention to the passengers, their possessions, and locations throughout the game in order to solve it successfully. That game also introduced envelopes to open as the game progressed and it’s one of the titles that doesn’t see players escaping anything; instead they are trying to issue a code at the end to transmit the identity of a killer to authorities.

By the time the series release of Exit: The Game – The Catacombs of Horror  came around, I really thought the Brands couldn’t have any new tricks up their sleeve. I was wrong. With Catacombs of Horror, they have introduced the two part adventure, giving players a longer puzzling experience in one box. 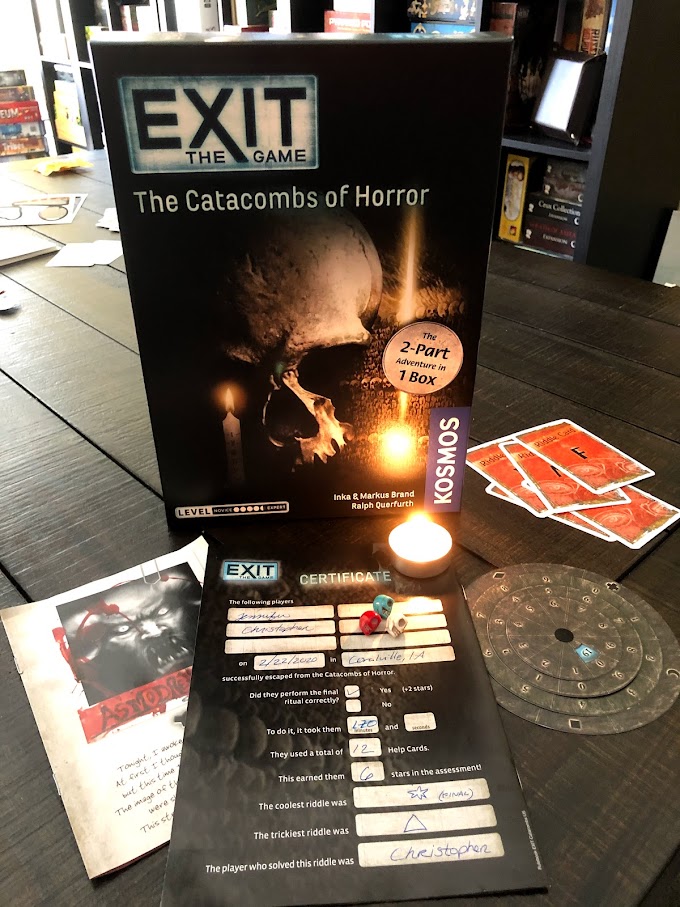 You can play straight through the entire game (allot yourself at least 2 hours) or play the first half and come back to the second half another time. There are also some fantastic new twists on the puzzling mechanisms (a candle is included and must be lit to solve one of the puzzles, for example), and the components got an upgrade (I’m holding onto the adorable little skulls indefinitely). Alongside the puzzle elements, the theming in the series has gotten better and better as new titles are released. Catacombs of Horror provides a well written narrative, albeit very very dark. As we solve puzzles, we find ourselves chasing down what happened to a friend of ours who disappeared into the Catacombs of Paris. It seems he may have met a dark end after having crossed paths with some demonic forces. This title is definitely not for the kiddos, which might be its only drawback. We have clever tweens who enjoy puzzle games, and this isn’t something we can share with them.