During the early reign of King Charles III (Charles the Simple) in West Francia, the area was besieged by Viking invasions, while the memory of the previous and frequent Saracen incursions was still fresh in the minds of the general populace. The Saracens were Muslim - mostly Berbers from Africa – and had only let up on the Franks because they’d been pushed back by the Vikings. The local nobles were left largely to fend the Vikings off on their own.

In Paladins of the West Kingdom, players assume the role of these unnamed nobles (most likely Dukes), working to keep the region safe and spread their faith (historically: Christianity).  I really enjoy this theme, and in fact, playing the game nurtured my interest in the historical kingdom of West Francia.  That’s why I can tell you that while the rulebook notes that the King lends his Paladins to the nobles to aid them in their quest, I’m giving all the credit for the loan to the designers, Shem Phillips and S J MacDonald.  Paladins are a fictional group of knights in French lore (think of them as similar to the Knights of the Round Table in British lore),  or alternatively, a translation of the Frankish royal title of Palatine Count, which was a noble that focused mostly on judicial and governing matters and was not known as a knight.

I’ve won a few and lost a few games of Paladins. It’s a worker placement game that incorporates card drafting.  At the beginning of every round, players draw the next three Paladin cards in their deck and choose one to play for the round, one to put back on top of their Paladin deck to draw during the next round, and one to put at the bottom of their Paladin deck. Each Paladin boosts faith, influence, or strength (usually more than one of these), and also provides a special benefit. 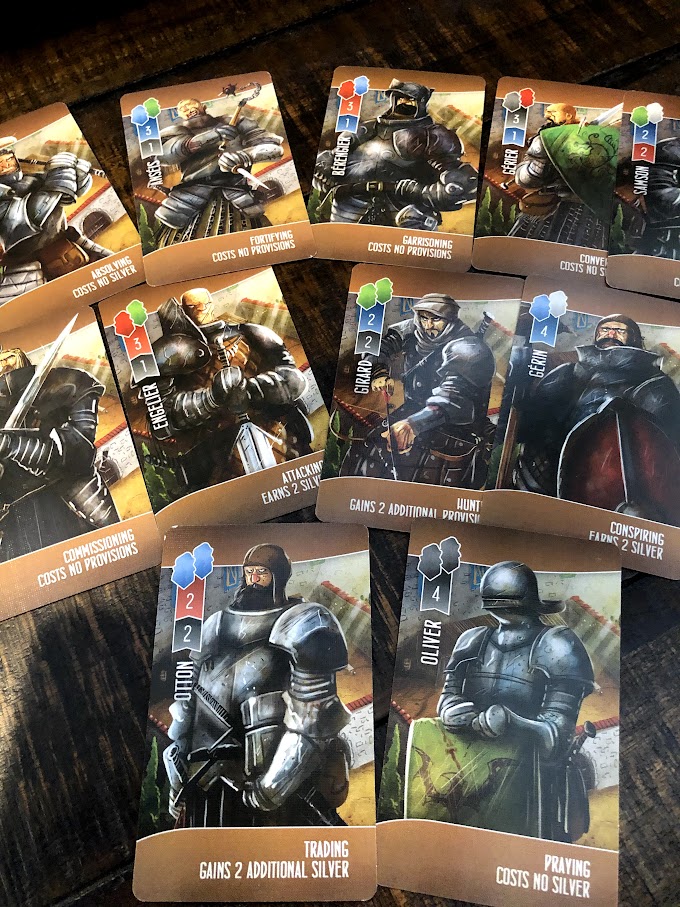 If you’ve got players prone to analysis paralysis, this is where they may get stalled, especially in the first few rounds. After Paladins are selected and put into play, workers for the round are selected by each player and put into their personal resource supply. You have many stations on your player board to place your workers during the round,  and when you do so, your moves are independent and walled off from your opponents (they cannot tamper with your player board or placement of your workers on it). 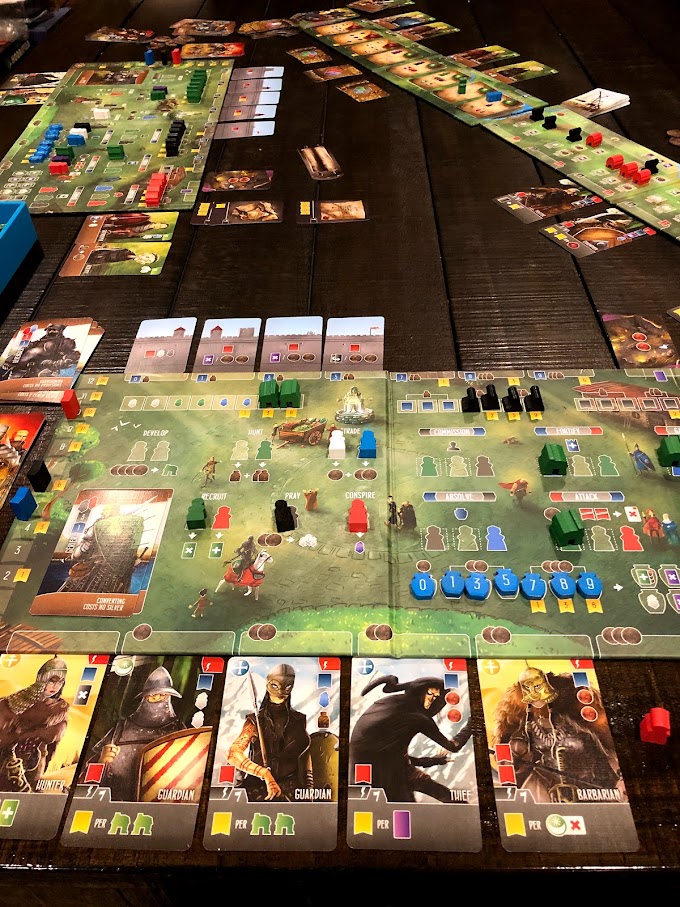 However, there is one area on the general board (the King’s Favour card area) where you can also place your workers and those spots are competitive. Also contributing to player interaction – some of the stations on your player board where you place workers allow you to move resources (monks and outposts) from your player board to the main board, consuming a competitive spot that provides a placement reward. And all the resource cards on display around the main board – the townsfolk you can hire, the walls you can build, the outsiders you can attack or convert, the tavern cards you draw workers from, and the suspicion cards you gain $$$ from, are all lucrative items for which players must compete. So we’ve got a good mix of independent action and player interaction in Paladins.  There are not a lot of opportunities for  “take that” behavior in this game, other than perhaps timing your draw of suspicion cards to trigger an inquisition when you know your opponents will suffer a penalty and be forced to take on more debt.

Giving the game more intellectual weight, worker placement on your board and the actions workers trigger often have additional requirements beyond number and types (i.e., colors) of workers. The actions triggered by worker placement may be constrained by your strength, faith, or influence level. And some spots or actions triggered by placing workers in those spots require money or provisions. All of these prerequisites can be gained as rewards from prior actions triggered by various worker placement, so much of the game is finding the most efficient ways to obtain prerequisites associated with the series of actions you’d like to take as the game progresses. I worried this decision making would be a weak point for analysis paralysis (I’m a pretty good candidate for testing potential AP, as I’m prone to it) and while there can be a bit of that during the game, nothing excessive was logged during our plays.

The artists (Shem Phillips on graphic design and Mihajlo Dimitrievski on illustrations) have printed helpful indicators next to each placement location on boards and cards to identify any prerequisites as well as rewards. It’s an example of how the designers have worked with the artists to layer meaningful game information into the layers of artwork. In fact, all of the symbols implemented across the game components are really quite helpful. Bonus: once you familiarize yourself with them in one of the West Kingdom games, you’ll have learned them for the entire series as the artists reuse the same symbols in all three titles.

Beyond the iconography, the illustrations and other artwork are lovely. As with the iconography, the same style of artwork is implemented across the entire series and it carries the theme well. There was a good mix of cisgender representation, but not a lot of racial diversity, especially as would be suggested by the historical setting of the game (for example, Berbers in the area had skin tones ranging from light to to dark brown).

The components for Paladins of the West Kingdom are well made. 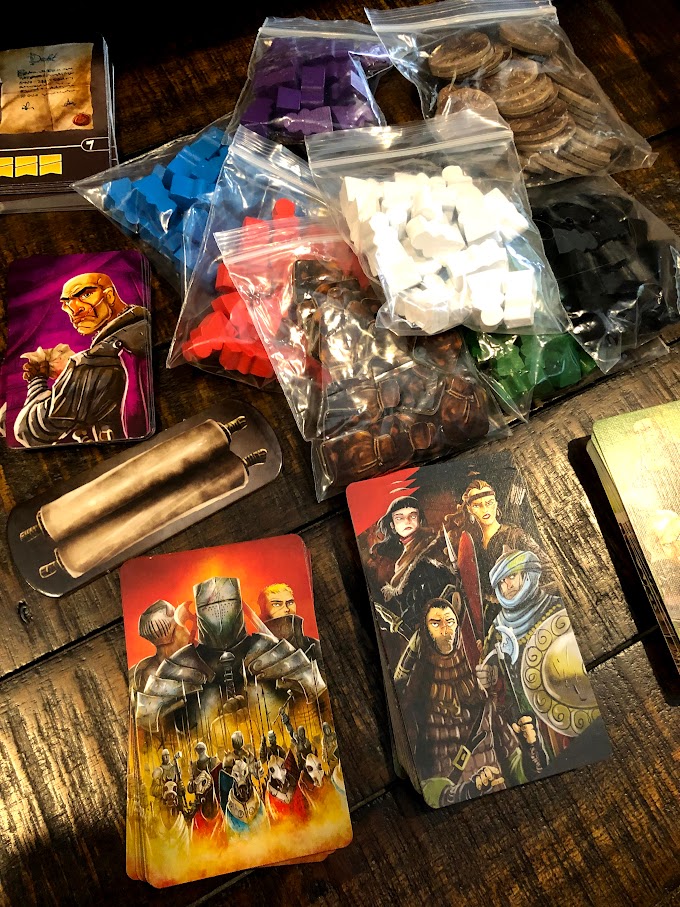 There are wooden meeples, an assortment of foldable boards constructed from cardboard, and various plastic coated card decks. We found the rulebook to be clear and direct, and there weren’t any items we had to look up online. It would have been nice if the designers included a player aid in the components, but I was able to compensate for the oversight by downloading a detailed player aid another user uploaded to the forums on BoardGameGeek.com. 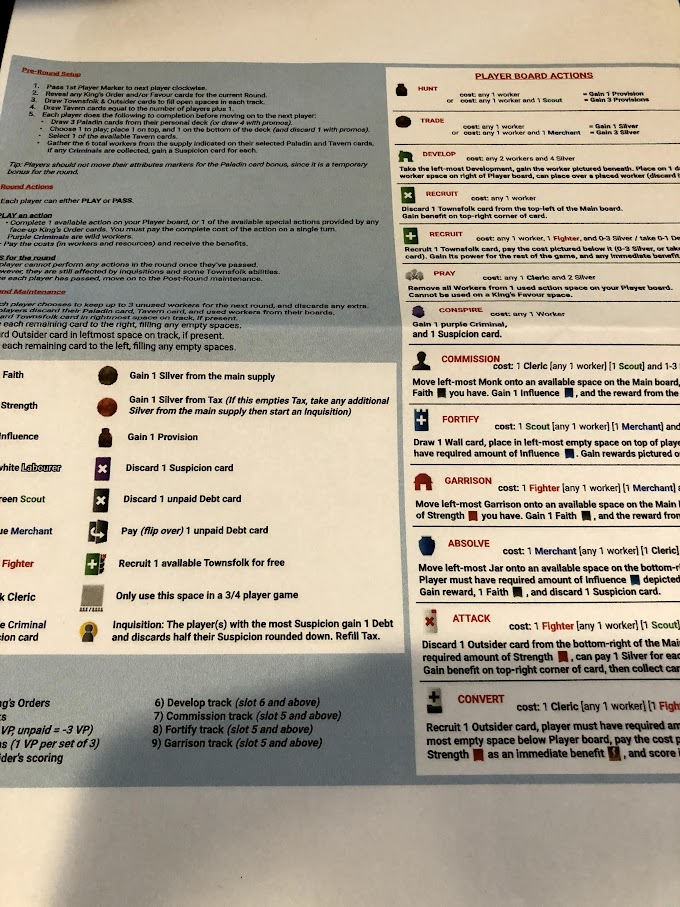 Paladins of the West Kingdom is my favorite game of the West Kingdom series. All of the worker types and available actions make sense within the context of the theme, the mechanisms (worker placement, card drafting) integrate tightly with the scoring system to provide opportunities for building a victory point engine, and the game is complex and interesting yet still accessible for new players. The game is also a great value at its price point (approx $50) given you’ll get dozens of multiplayer games in before even a hint of same-o same-o creeps in. Many games with comparable replayability and complexity are double the price of Paladins. There’s also a solo play mode, which provides an additional way to explore the game.