Almost a decade after my interest was first sparked in reviewing games for Rio Grande Games, I finally met someone on the inside of the company in a mutual FB industry group and made a connection. Soon after, a review copy of Beyond the Sun by Dennis K. Chan was at my door.

My first observation: the cover art, by Franz Vohwinkel, is phenomenal. 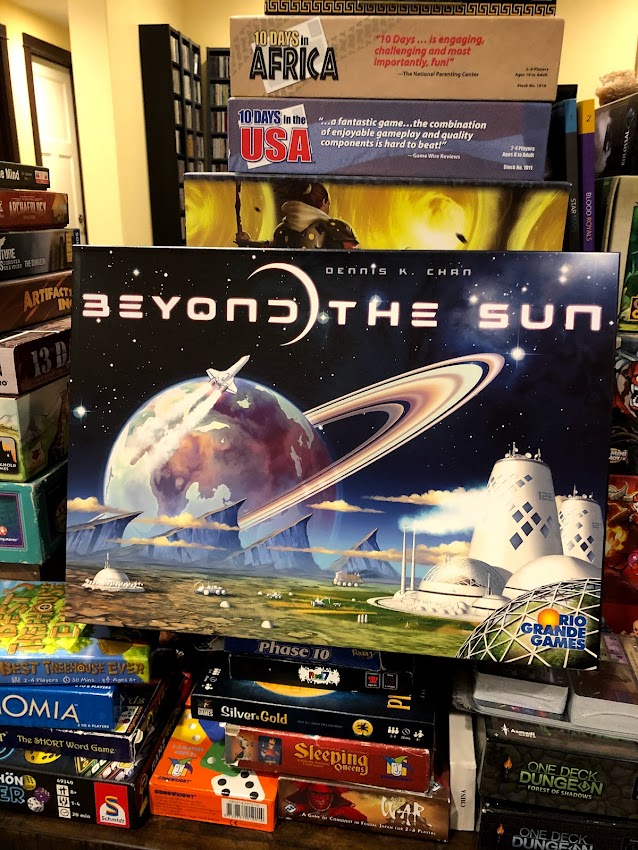 In Beyond the Sun, players take on the role of faction leaders on the move, colonizing space and researching new technological breakthroughs in a post apocalyptic universe.  Each turn, players make decisions on what action to take and what resource to produce. However, most of the action spaces on the board are initially blocked off. A blocked action space can only be used by a player once they’ve taken the prerequisite actions on previous turns of researching the technologies associated with the blocked action. These technologies and associated actions are presented in a tree display with the level 1 technologies/actions branching off into level 2, 3, and 4 technologies/actions.

After the action and resource phases of a player’s turn, they may claim an achievement, if they’re eligible. There are multiple achievements laid out for each game and players compete for the limited spots on each achievement card. When 4 achievement discs have been placed, the final round is triggered, followed by scoring. 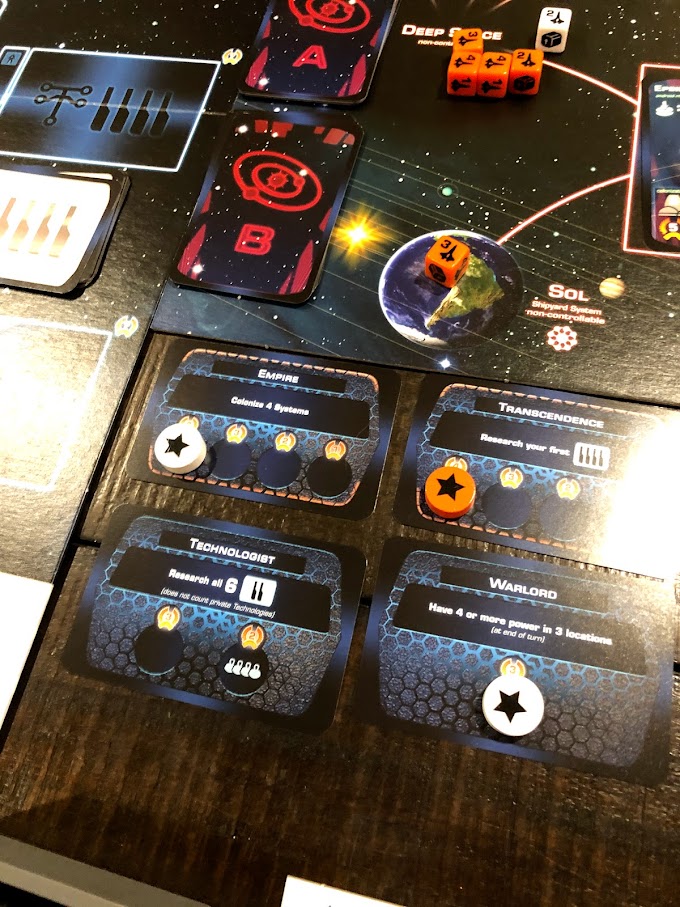 After a thorough read through the rulebook, I got the game on the table pretty quickly. It’s a well written rulebook by the way, with humor to boot. I especially love the rule for determining first player (see #13 under setup). 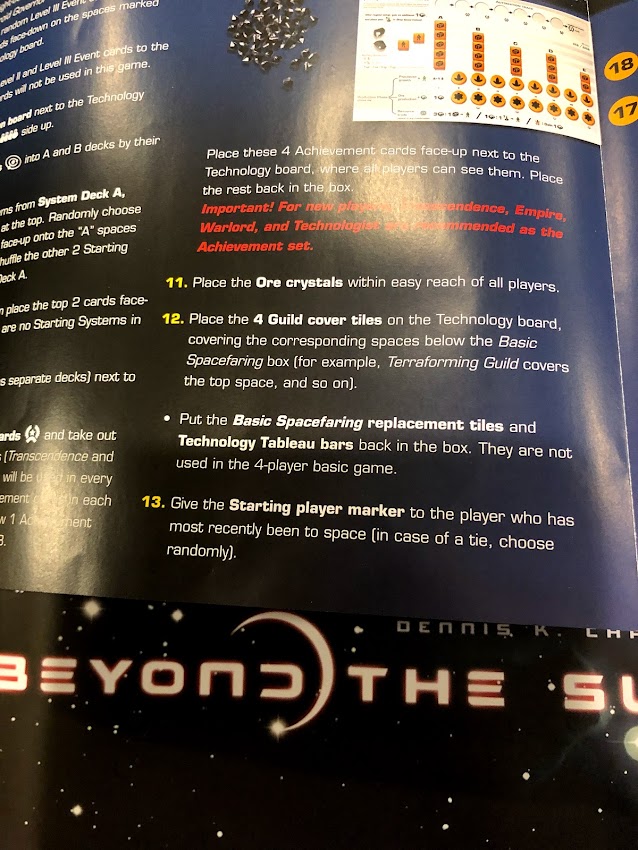 With the pandemic in full swing and social isolation in effect, I’ve focused on 2 player games of Beyond the Sun between my husband Chris and myself. During our first game, we spent the first few rounds aggressively fighting over one system we both wanted to colonize. Back and forth, back and forth, the control shifted. At some point this power struggle became more about a matter of stubborn will between the two of us and less about strategic play and I have to admit, I got a kick out of the ability to passive aggressively annoy and rattle my husband in this way. 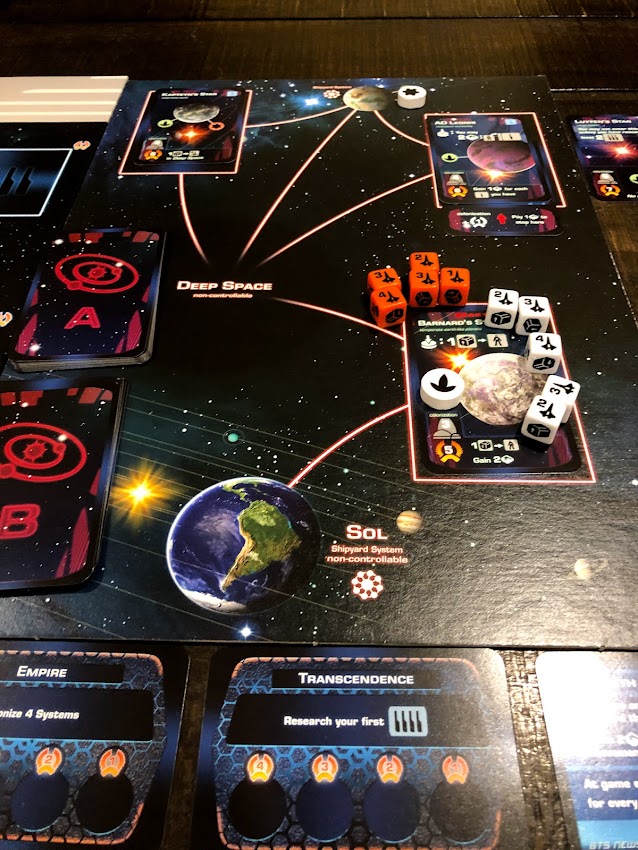 Eventually I gave in on that and moved on to focus on claiming the easier achievements while Chris focused more on building his engine through research and got caught up in trying to get to level 4 on the technology tree. That proved to be his downfall. Focusing on colonizing and the low hanging fruit of completing more level 2 research in lieu of making it to level 4 won that first game for me, 59 to 49.

I occasionally ran into a bit of analysis paralysis in during my plays of Beyond the Sun, but nothing too severe. And the components (dice, plastic coated cards, wooden tokens, ore crystals, player boards, player aids, and the central board) have held up well. They’re not as beautifully designed as the cover art, but the illustrations on them fit the theme and carry the story as intended.

We really enjoy this game at 2 players. It’s a solid engine builder that’s quick to learn but variable in play to keep the boredom at bay, and quite thinky. Our only complaint is that the game doesn’t come with a score pad to do the math at the end to determine the winner (the publisher would like to you know that you can download scoresheets on their website). A great addition to any well curated board game collection, I highly recommend Beyond  the Sun. 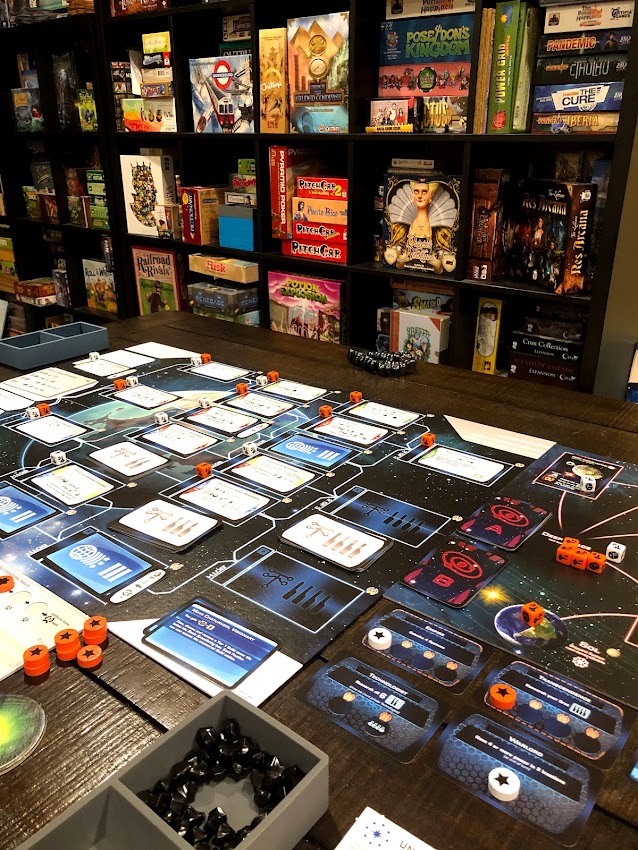