The good folks at Stonemaier Games sent us a review copy of the newest expansion for Tapestry recently. We have the base game and the previous expansion, Plans and Ploys, in our game library. Arts & Architecture is designed by Jamey Stegmaier and Mike Young, with artwork by Andrew Bosley and landmark sculptures by Rom Brown. The expansion adds more of the familiar components: five new civilizations, six new capital city mats, 5 new landmark cards with landmarks, twenty new tapestry cards, and eleven new tech cards. Arts & Architecture also adds completely new features to the game, including an arts track with accompanying landmarks, twenty masterpiece cards, twenty inspiration tiles, and an upgraded science die to include iconography referencing the arts track.

The new arts development track is quite useful and thematically blends well with the overall concept of the game. 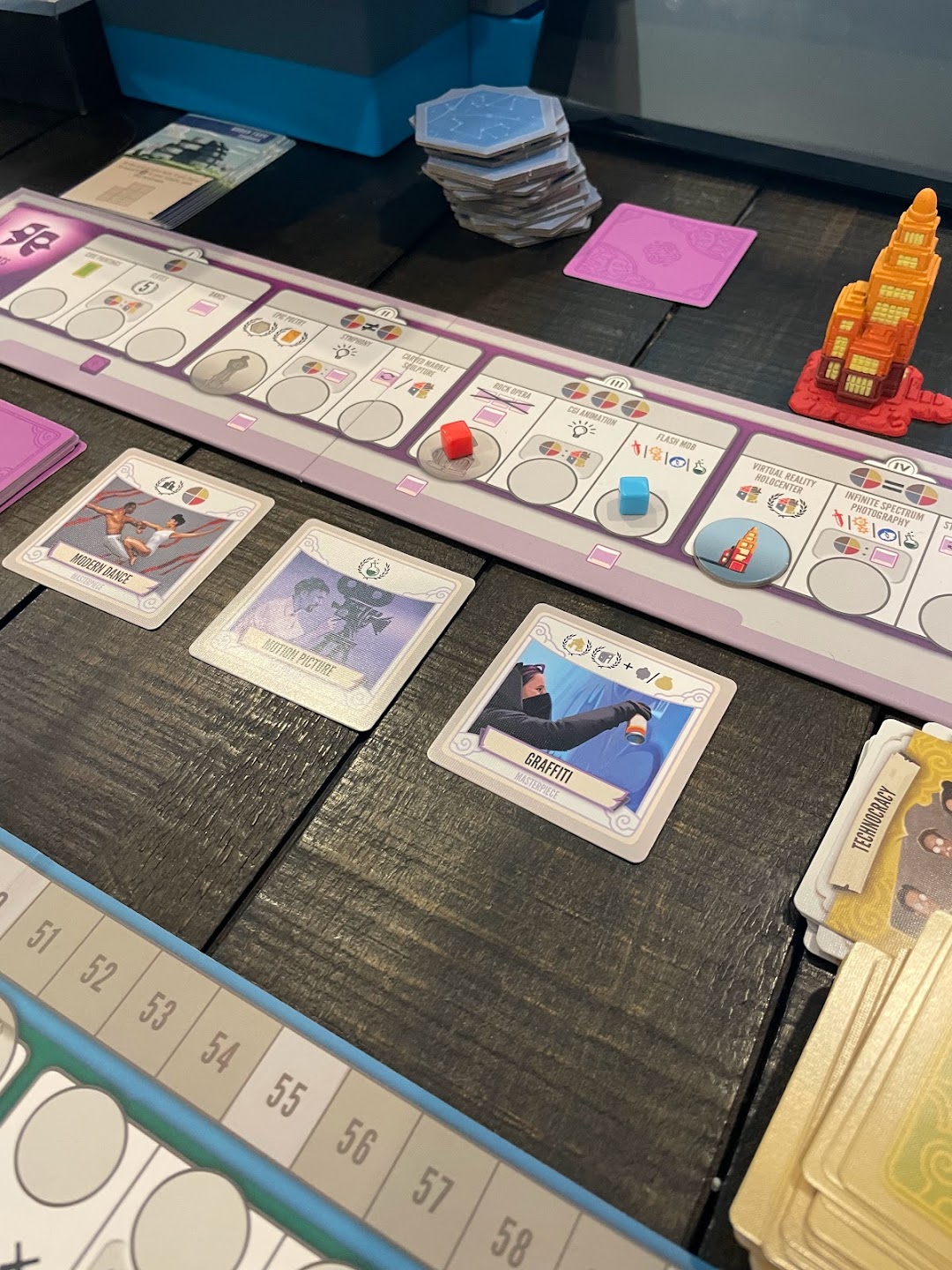 It gives you the opportunity to place more of your income buildings, score victory points for tech cards and exploration tiles, acquire masterpiece cards which provide benefits during income turns, and place inspiration tiles on your income mat over existing income tracks to improve the rewards gained during income turns. In the first few games I played (2 player), I concentrated heavily on the arts track, progressing to the end of it easily before game end, all the while also making steady progress on two of the base development tracks. 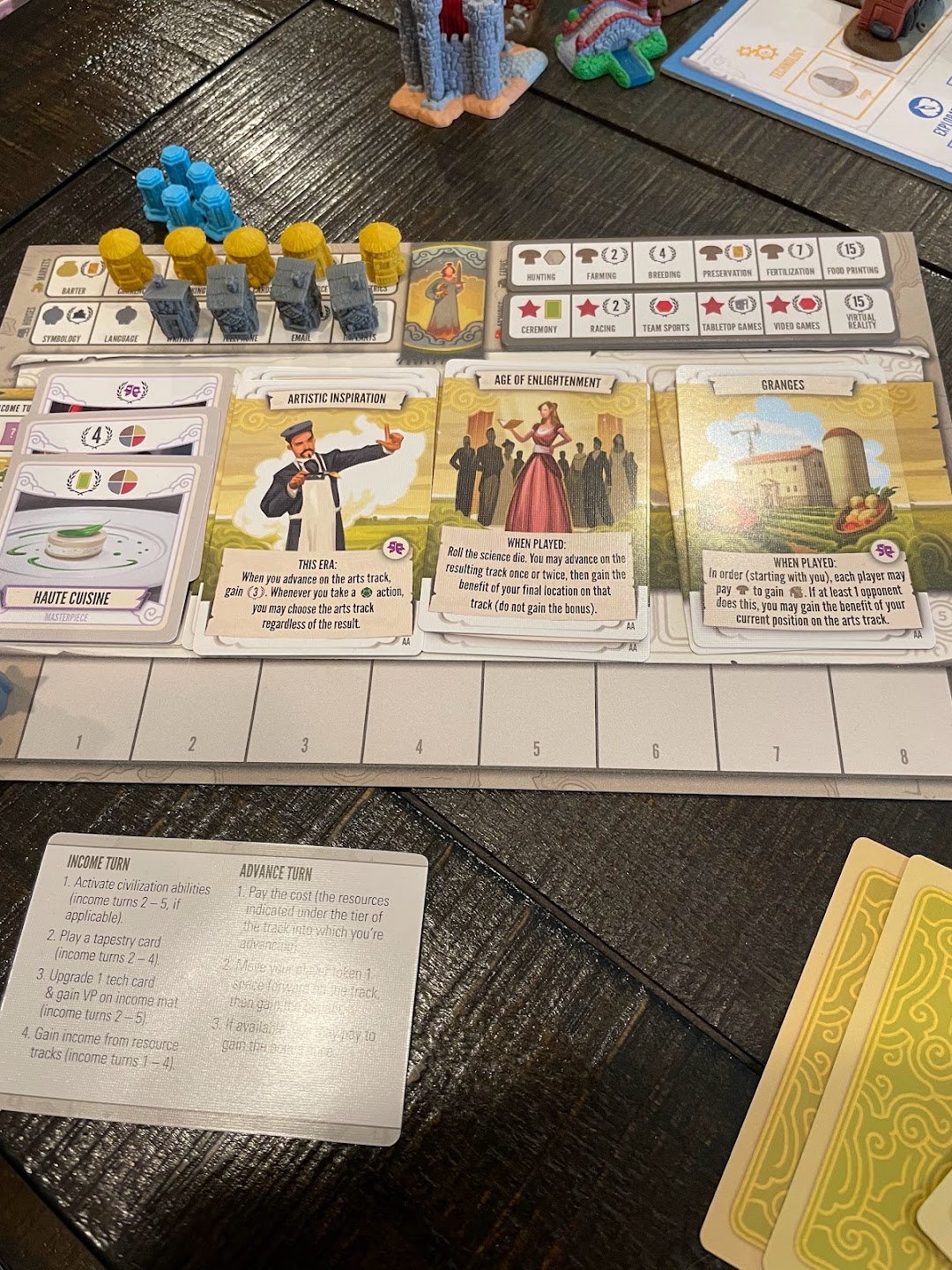 In the most recent game (4 player), I didn’t use the arts track much at all, which was a huge mistake, landing me in third place while the frontrunners leaned on the arts track significantly. I’ve previously noted in my review of Tapestry (https://www.thatswhatjennisaid.com/2020/07/board-game-review-tapestry.html) and Tapestry Plans and Ploys (https://www.thatswhatjennisaid.com/2020/12/board-game-review-tapestry-plans-and.html) that to win the game, you must diversify and progress on at least two tracks simultaneously, but to be careful trying to do much more than that or you’ll spread yourself too thin. With this expansion, I’ll amend that to note you’re unlikely to win the game unless you focus on the arts track as well as two of the base development tracks, as the arts track is really an enhancer for all the other tracks. It will be interesting to see how development track focus will need to be adapted when Stonemaier releases additional expansions for the game (anticipating a religion track at minimum; every civilization has its religious scholars). 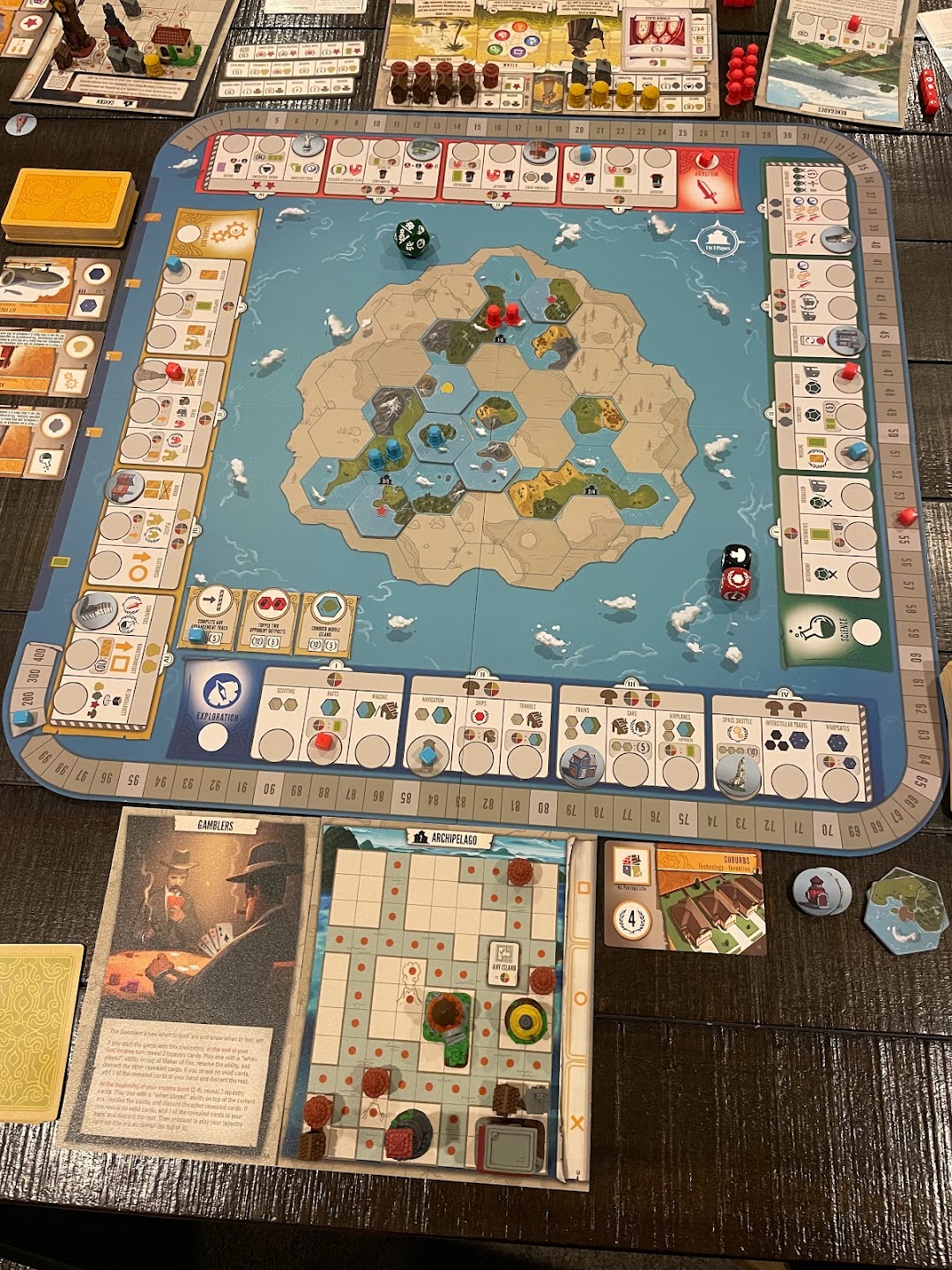 The additions to the tapestry deck include a new ability type - continuous. These abilities begin when played and continue for the duration of the game instead of just the current era. There are also new tapestry cards that allow you to place landmarks on them for scoring as an alternative to placing the landmarks on the capital city (or on the map as some civ powers allow you to do). I did not have a chance to play any of the continuous tapestry cards during my recent games (although they look useful), and I passed over playing any of the landmark tapestry cards I acquired as they did not seem as beneficial as the other tapestry cards I had in my hand.  I don’t think I’m a big fan of any of the cards that let you place landmarks on the for points (including the new tech cards with this feature); I prefer to prioritize my city map for landmark placement first. Maybe I’m just doing it wrong, but I haven’t made use of my landmark cards at all, even in the games where I won by a large margin. They seem to be an entirely optional aspect of the game and not necessary for a win.

One more change with the Arts & Architecture expansion is another refinement of the civilization adjustments first introduced in the Plans and Ploys expansion. This fine tuning of civilization powers comes as a result of extensive real-world player testing and aims to rebalance the game for greater fairness. I think it might need further refinements because my husband Chris played the Architects civilization in our last game and the adjustment afforded him 30 VPs at the start of the game as some sort of handicap to balance out perceived weakness, but his city mat was so perfectly attuned to his civilization (the mesa) that he won in a landslide (80 points above the second place player).

Overall, I think that the Arts & Architecture expansion is a great addition to the Tapestry portfolio. It adds more variety, layers in additional ways to strategize and score, and provides some new opportunities for player interaction on the map, without causing any additional complexity. While it’s not a must have for the base game, it’s certainly a nice-to-have addition that I’m happy to recommend.

Beyond the details of the new expansion, I did want to take this opportunity to mention that with repeated plays of the base game as well as across the expansions, I’ve noticed that 4 player games are much more competitive than two player games (at least in our household). There isn’t a single time Chris and I have played the game by ourselves that I haven’t walloped him by 100+ points, yet when we play at 4 players, he has won twice or been neck in neck with the winner, whereas my scores are significantly lower. That’s got to be tied to the dynamics of how this game plays at higher player counts because it doesn’t make any sense that all on my own I could go from being a genius at 2 player to just average at 4 player.