Every home cook has a few favorite cookbooks. You know the ones. The cookbooks are filled with easy to follow recipes that look amazing and taste even better. Full color photos accompany several of the recipes and much like a good restaurant, you can’t go wrong no matter which item you choose from the offerings. Southern Pies: A Gracious Plenty of Pie Recipes, From Lemon Chess to Chocolate Pecan by Nancie McDermott is just that kind of cookbook.

I got interested in recreating authentic southern pecan pie after I enjoyed the house recipe while dining at the Eclectic Café in Memphis, TN (you really must go there if you’re passing through Memphis). I picked up Southern Pies in the hopes that at least one of the pecan pie recipes contained within could approximate the fantastic pie served at Eclectic Café. I wanted to save my formal review of the cookbook until I’d attempted the pecan pie recipe but the results of the two recipes I have already tried have been so great that I didn’t want to sit on my opinions any longer.

Hubby and I baked the Strawberry Rhubarb Lattice Pie a couple of weeks ago. The pie was perfectly sweet- not cloying but not tart either (if you like a more sour flavor you can cut the sugar back). It was also very pretty. It got such rave reviews in our house that we made it again last week for our brother and sister-in-law in Seattle while visiting them. I roped in my nephew as my sous chef and in no time at all the whole family was chowing down on the still warm pie fresh from the oven. 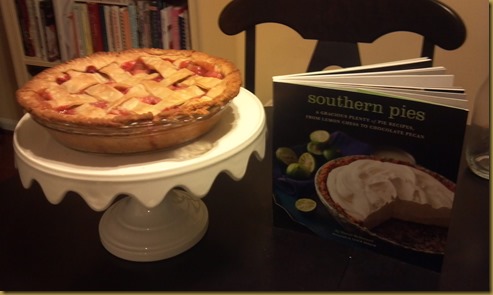 Earlier this week I tackled the Amazing Coconut Pie. This is a custard based coconut pie that forms its own crust during the baking. Very clever and it was quite tasty with a lot of coconut throughout the custard (I hate those wimpy coconut pies that have nothing more than a few sprinklings of coconut hidden under layers of other ingredients). For best results I recommend you use frozen coconut pulp (available at most Asian grocery stores) and not that dried out sweetened bagged junk in the baking aisle.

As mentioned above, I will probably attempt one of the pecan pie recipes next. But no reason to stop there – McDermott’s cookbook is packed from cover to cover with creamy custard pies, ripe fruit pies, the usual meringue pie suspects, chess pies, and some interesting pies like bean pie or sweet potato pie. These aren’t McDermott’s original recipes by the way. She’s used this book as a way to present some of the best southern pie recipes she’s come across in her research, cleaning up the presentation and making slight modifications after taste testing the original recipes. She’s done a great job assembling a master collection of pies and I understand that she has another book out that’s done in a similar fashion aptly named Southern Cakes.

I recommend this cookbook without hesitation. And here’s a bit of interesting trivia for you. While reading through this cookbook, my husband and I along with a friend of ours got into a friendly debate about what should top a cream pie (such as banana cream, coconut cream, or chocolate cream pie). Dear hubby and I both assert that obviously cream (whipped cream, or Chantilly cream as it is sometimes called) is the correct answer. Most southern cooks like McDermott however (and our friend, who is not from the south but from the midwest) think that a cream pie should be topped with meringue. It’s definitely a cultural and regional preference; I didn’t realize putting meringue on top of a cream pie was even an option till I started researching it. Better Homes and Garden cookbook opts for meringue while the Betty Crocker cookbook calls for cream. Martha Stewart prescribes cream for topping some of her cream pies but meringue for others. So the debate rages on. I would be interested to know what fellow readers have been raised to believe is the proper cream pie topping.