Here’s a story of a lovely lady (spoiler: it’s me) and her pride and how it has led to the discovery of the single greatest board game I have ever played. It’s probably also a good primer for other reviewers on increasing your reach.

At GenCon this year, I was perusing the wares of the various booths and my eyes caught a glimpse of two beautiful game boxes. Each had crisp metallic lettering with an old world feel and artwork that radiated European class. I made my way to the booth and waited patiently to speak to to the team manning it as there were many buyers lined up to purchase the games. I didn’t know anything about the games (Brass Birmingham and Brass Lancashire), or the publisher – Roxley Game Laboratory – but I knew I wanted to review one or both of the games. Almost every board game love story I star in in can be summed up this way: I am seduced by the artwork or theme and then I stay for the right mechanics. When the lead rep spoke with me, he gently rejected my request. He wasn’t familiar with my reviews and he didn’t really have the time to go over my bona fides right then and there. Besides, a quick glance at my Instagram (which at the time I didn’t use in relation to my review portfolio) told him I didn’t have a significant presence there and that was something he typically used to evaluate new review requests. He told me I could contact him again after GenCon and we could discuss it further. I came away from GenCon with review copies of dozens of other games as I do every year but my pride was wounded from Roxley rejection.

Back at home, I made it priority #1 in my non-work hours to transform my IG account into a showcase for my board game hobby activity. I started posting pictures and commentary of every game I bought or reviewed. I shared game nights (we host them multiple times a week at our house for different groups of friends), unboxings, first impressions, library shots (we have 800+ in our collection), and epic adventures in gaming like our 12 hour TI4 experience. I made new IG friends who share my love of games and I had a lot of interesting conversations with commenters on my posts. Still, my inner critic nagged at me a bit. All this work to get a review copy of a game?  Shouldn’t I just buy the game? I have excellent relationships with most of the other US publishers; why is this game and this publisher so important to me? Because I wanted it, I think I’m a talented reviewer, and the publisher wouldn’t give me the game. That’s why. Wounded pride, ladies and gentlemen, wounded pride.

Sometime just after crossing a significant threshold in IG followers and another major publisher selecting one of my articles as a featured review on their Kickstarter campaign, I wrote back to the lead rep at Roxley, laid out my bona fides, and again asked for a review copy of Brass Birmingham. This time he accepted, and the game was on it’s way to me. 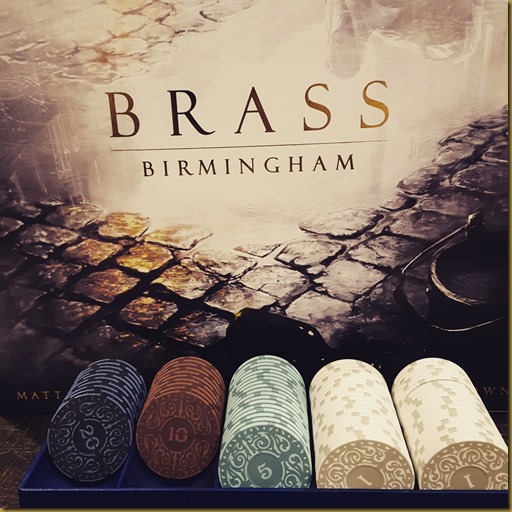 The day the game arrived, I strutted around the house (I work from home as an IT geek), puffed up with pride in my “win”. Then I opened the box and wanted to cry because the components for Brass Birmingham deluxe edition are so beautiful as well as sturdy. Clay chips in subdued hues for the currency; a two-sided, central board with different artwork on each side (one features a day theme and the other night); lovely cards representing various industries and English locations; cardboard tokens for players and canal/rail connections; and wooden tokens for industrial commodities (iron and coal) as well as beer (the cutest little beer barrels you guys). 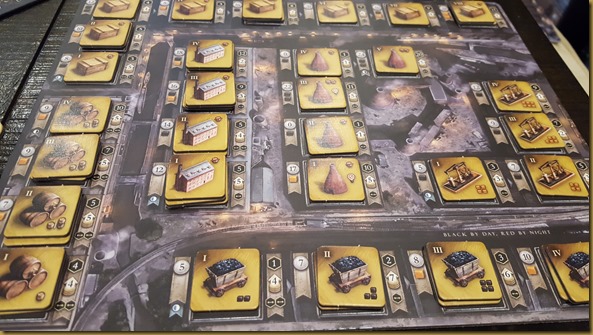 The rule book provides actual biographical details for the industrialists the in-game characters are based on. It also, of course, lays out all the rules and nuances of the game, and in excellent detail I might add. We didn’t have any trouble understanding any of the rules.

So far so good. But how would the gameplay go? Would I like it? Would I like it enough after a couple of plays (the minimum count in prep for a writing a review) to ever want to play again?

Readers, I liked it so much that it took me a month to get this review published because every time I had a block of leisure time I could dedicate to writing I opted to use it instead to play Brass Birmingham again. I played 7 games within the first week. And these are games that take 2 hours or more to play. I played with my husband, I played with our neighbors, I played with friends. I actually had dreams about the game, where I was working out different strategies to see which one worked best. I became obsessed. Even now, I’m on my way to the Dice Tower Retreat in Homestead, FL and I BROUGHT BRASS BIRMINGHAM WITH ME ON THE PLANE.

Let’s discuss the game play. In Brass Birmingham, players compete as European industrialists to establish a presence in cities, connect those cities (by canal in the first half of the game and by rail in the second), and benefit from the production of goods they control in those cities. Where you can create a presence and what type of industry you can build are dictated by the cards you’ve drawn and hold in your hand. Some locations are typically hotly contested while others are easier to snag for yourself. Some industries offer early, instant, and large rewards (10 VP for building pottery) while others are slower to produce returns and require a steady investment in building (looking at you manufactured goods). Industries are often built just to obtain the goods they produce for use in building other industries or connections. There are various markets that you can connect to around the board to sell your goods or to buy raw materials you need to build or produce goods. Which markets are open (determined by player count and random assignment) and what they will buy (determined by random assignment) will also factor into everyone’s decision on where to build. You can also leverage your opponents’ coal, iron, and beer produced as required to build or sell. One of the most interesting aspects of Brass Birmingham is that after you’ve invested time and strategic thinking into building out the perfect canal and industry network in the first half of the game, the canal era comes to an end and all your canal links and all your industries less than level 2 are stripped off the board. Now you must start again on building your network, this time with rail. It’s a chance to redo your approach to cities and connections if things didn’t go the way you wanted them to earlier in the game or a chance to double down on your strategy if it was working for you. 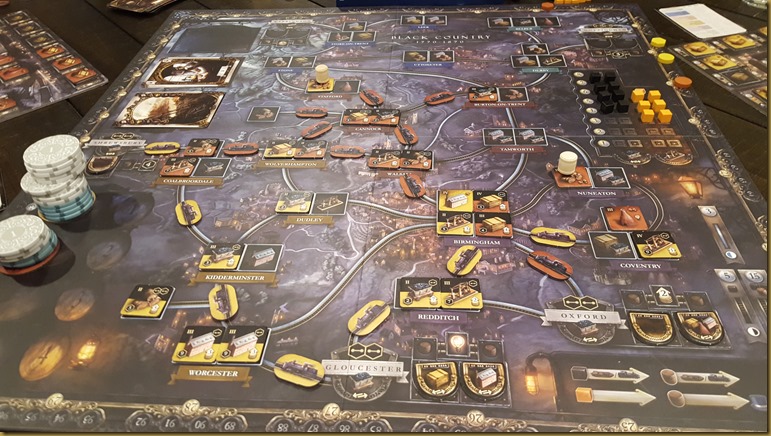 There are so many strategy options in this game. So many paths to victory! Of course, that means that Brass Birmingham is prone to analysis paralysis and it can be moderate to severe, depending on the players and their tendencies for indecisiveness. Myself, I can take 10 minutes a turn if allowed, because there are so many factors to consider when choosing an action.  Each game I have tried to hone my strategy a bit more, exploring the nuances of each potential branch in the larger decision tree. I see hours and hours and hours of challenging game play ahead of me with Brass Birmingham and I look forward to it.

Publisher: Roxley Game Laboratory
Players: 2-4 (We played with 2 and 4)
Actual Playing Time (vs the guideline on the box): About 2.5 - 3 hours per game
Game type: economic, heavy Euro