Kashgar: Merchants of the Silk Road

Last month I added Kashgar: Merchants of the Silk Road (designed by Gerhard Hecht and published by Grail Games) to my board game library. This deck building game originally debuted in 2013 to much acclaim, winning the 2014 Fairplay a la carte award, but an English language version only became available in 2018. 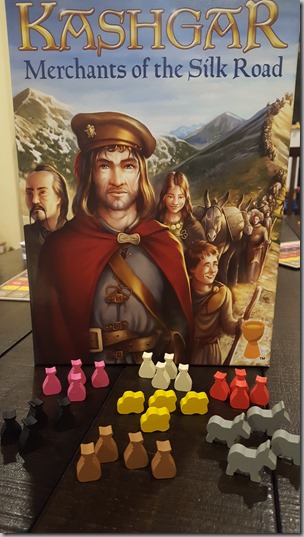 In Kashgar, players take on the role of spice dealers traveling the Silk Road with caravans, seeking to enlarge their caravans, build up supplies of gold, spices, and mules, and fulfill orders for their trade partners in Kashgar (a city in China). Each player begins with 3 caravans (decks) splayed face up before them in a tableau. Each caravan starts with 2 member cards: a Patriarch card (of course!) laid down first, and a random starting card, slipped behind and under the Patriarch card. Each turn, a player selects one card to activate, choosing from a pool made up of the front card closest to the player in each caravan. On the first turn, that’s any of the Patriarch cards. Caravan member cards may have multiple actions on them, and multiple types of actions – ones that can be performed and then the card must be discarded (Parting actions) and ones that can be performed and moved to the rear of the caravan (Caravan actions). 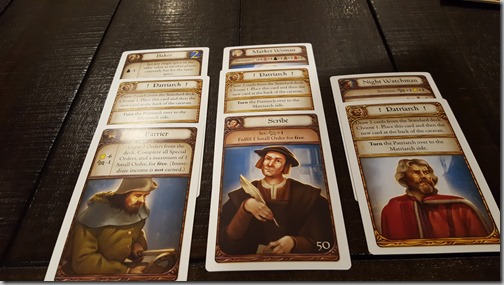 Components include thick cards for the various decks; player boards; and wooden tokens representing spices, gold, and donkeys.  All pieces are well crafted without any print or production defects. The cards should be sleeved for frequent use to ensure longevity. 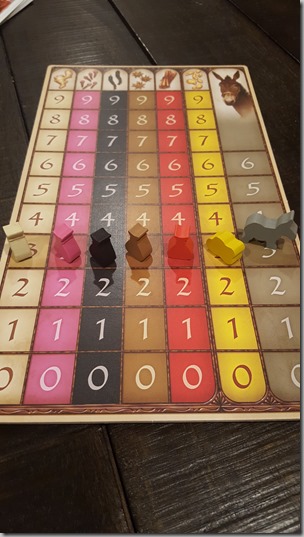 The theming is tight and implemented well. Many, if not most, of the caravan member card actions make sense in light of their roles. For example, the Farmer lets you fulfill a wheat field order for free. The movements (front to back) are appropriate given the context of caravans.  The artwork carries the theme beautifully with colorfully illustrated cards that evoke the setting in time and place.

The gameplay doesn’t disappoint. In a creative twist, Kashgar turns standard deck building games upside down – literally. Instead of your draw deck being face down in front of you, shuffled and mysterious in its order of contents, it’s laid out before you face up in your caravans. You might think that because you know what cards are going to be available for activation before you begin your turn, that the game play would be easier than in other deck building games. You would be wrong. Yes, the surprise aspect (and associated panic) of whether you’ll be able to get the card you really want or not has been removed but in its place is the responsibility of planning your current and future actions to ensure everything lines up so that you can perform the most effective sequence of actions. Should you activate a card in a caravan that targets one of the draw decks? It will give you access to new actions and possible victory points, but it will add another card to that caravan, making every other card in the caravan one turn further away in the future. Maybe you should fulfill an order if you have the supplies? But that might decimate your gold and what if the only card in your tableau that increases gold is buried directly under another card that requires gold to perform its action? Decisions, decisions. Due to the visibility of player decks and the associated increase in available information to consider when making turn choices, Kashgar is subject to some analysis paralysis; perhaps a bit more than other deck builders.

We’ve played Kashgar with hardcore board gamers and we’ve played Kashgar with gamers who usually lean toward lighter games. In every game, the players loved Kashgar. Several of our friends ordered the game soon after playing it at our house. I think the broad based appeal of the game stems from the ability to win it using several different strategic approaches. Players who favor a deep analytical approach can carefully calculate each potential move and invest the time to plot the most effective action while players who favor a more relaxed approach can build a simple engine to play the caravan members off each other for successive advantages and let their turns run a bit on auto pilot. Either strategy can win the game, depending on the specific circumstances of a particular run. The variety of win paths also lends to Kashgar’s replayability (along with the size of the main deck and the random starter cards).  It’s definitely a game my husband and I will be replaying with each other (it plays great at 2 players) and with other members of our gaming group. As soon as Grail Games puts out an expansion, I’ll be all over that too. Kashgar is available through Amazon as well as other vendors.

Publisher: Grail Games
Players: 2-4 (We played with 2, 3, and 4)
Actual Playing Time (vs the guideline on the box): about 35-45 minutes per game
Game type: deck building 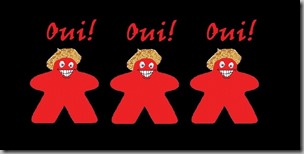