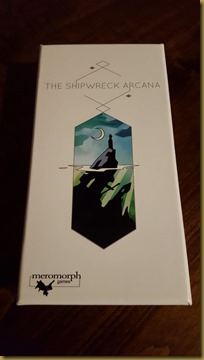 We hosted a lot of small gatherings in December and they presented the perfect opportunity to bring some games to the table that we hadn’t yet played. The Shipwreck Arcana was one of these games. My husband Christopher talked me into acquiring it, promising it would be something I’d enjoy. I was skeptical because he described it as a logical/mathematical pattern building puzzle game (BoardGameGeek.com classifies it in the Math category among others) and I don’t tend to enjoy those as much as other types of games.

We played several games, usually with the full count of five players. The first thing I noticed when I unboxed the game was how pretty the Arcana cards are. The artwork is is unique in style and reminds me a bit of a tarot deck. It’s a pleasure to lay out the cards for display on the table. Components include the Hours card, the Arcana cards, fate tokens, score and doom trackers, number line tokens, and a velvet grab bag. All of the components are sturdy enough to hold up to frequent use although the cards will show wear and tear if not sleeved. 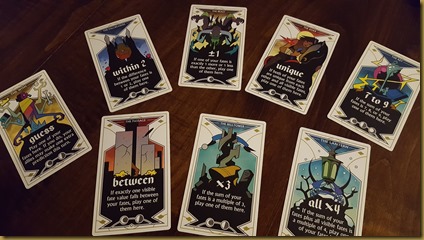 The second thing I noticed about the game is that its theme is weak. A well implemented theme is important for pulling me into a game. The Shipwreck Arcana provides only a thin backstory (players are “trapped in a drowned world” and must “use a mystical deck and a healthy dose of logic to predict each other’s fates and escape unscathed”) and can only manage to loosely drape the theme over the logic puzzle that this at the heart of this game.

In The Shipwreck Arcana, players take turns drawing numerical fate tokens from a bag (drawing back up to 2 tokens each turn), hiding the value of one of the tokens, and providing logical clues regarding the hidden value by placing their other fate token face up under one of the Arcana cards that are on display in the center of the play area. 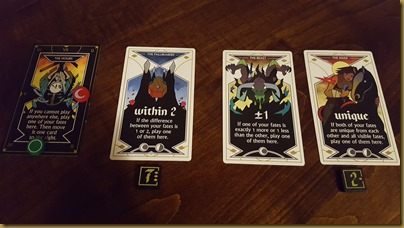 Each Arcana card has a logical statement on it such as “If one of your fates is double or triple the other, play one of them here”.  After the active player places one of their fate tokens under an Arcana card, all other players work cooperatively to deduce the numerical value of the active player’s hidden fate token, based on the clues provided by the Arcana card. To assist, the active player lays out a number line in their tableau (made up of number line tokens valued 1-7), and as the players work to determine the hidden fate token value they may ask the active player to turn over number line tokens representing values they have eliminated as possibilities. After the contemplation and discussion is complete, they may venture a guess, and if they are correct, a victory point is awarded (represented by 1 movement forward for the green token on the Hours card). If they are wrong, the red doom token advances forward on the Hours card. If the doom token reaches the 7th spot on the Hours card before the green token does, all players lose. Regardless of whether players opted to guess or not guess, after the drawing/contemplating/guessing phases finish, the fading phase occurs. Each fate token has a variable number of pips inscribed on it and if the collective sum of the pips on fate tokens that have been placed under an Arcana card exceeds the number of moons printed on the card, then the Arcana card fades. The fate tokens get tossed back in the grab bag, the Arcana card gets flipped over (offering a special one time action that may be used in a future turn to aid players), a new Arcana card is drawn and added to the display, and the doom token advances on the Hours card by two if a correct prediction was not made.

What I realized from playing The Shipwreck Arcana is that groups can play to win as quickly as possible (taking guesses freely even when the logical clues don’t conclusively point to one specific value for the hidden fate token) or play to maximize the puzzle solving experience (guessing only when the hidden value can be fully deduced from the clues). Players who have a high tolerance for risk and less interest in puzzling out the answers will usually opt for the former. I’m that kind of player. I rolled my eyes every time the other players wanted to hold back a guess. Their reasoning was that there was no card at risk for fading (and thus no penalty for abstaining from guessing) and since they weren’t absolutely certain of the hidden value it wasn’t worth the risk. I thought that was ridiculous, especially when our green token was several spaces ahead of the doom token. “We can afford 5 wrong guesses!”, I’d exclaim, exasperated. “What’s the holdup? Do we want to win this or not?”. Christopher: My wife wanted to guess at 20/80 odds even when no card was at risk for fading. Her preference for risk is VERY very high.

The rules for The Shipwreck Arcana are fairly straightforward.

The Shipwreck Arcana is a ok filler game in which risk takers can fare just as well as logic puzzlers, especially on easier levels. Its strengths include its resistance to analysis paralysis, striking and original artwork, replayability, and the ease of learning the game for new players. Its only weaknesses are poor theming and the conflict it may introduce between players who want to puzzle everything out to certainty and those that want to take risky guesses to push ahead on the Hours card.

Christopher: This is not a filler game, in the traditional sense of the word. It is a meaty puzzle game that plays quickly. I highly recommend it.