Recently, the good folks at Kosmos sent me a review copy of Mercado. It’s a game my husband has had his eye on and asked me to check out, so I thought I’d give it a go and see if I enjoyed playing it. We played two games -  a 3 player game with the two of us and our 13 year old daughter, and a 2 player game where my husband and I faced off against each other. In our 3 player game, my daughter got well ahead of my husband and I early in the game and I only managed to catch up to her on the very last turn as I crossed the finish line and landed right on top of her token. The tiebreaker rule is a bit interesting – the person who lands on the occupied space last wins – and allowed me to pull off a surprise victory. In our second game, my husband and I were neck in neck in scoring the entire game and both ended on the same space just past the finish line when all was said and done. Once again, my token was on top and so I was declared the winner. Two for two! 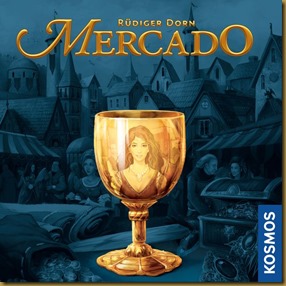 In a sea of board games, with wave after wave of new releases coming ashore, what’s compelling about Mercado is that it sustains player interest with a variety of strategic choices and high replayability, yet is light enough to move at a good pace and keep the mood at the game table friendly.

Mercado is a modified auction and bag building game where all players assume the role of wealthy buyers consumed with the desire to keep up with the joneses and outdo their neighbors in amassing opulent treasures. They blindly pull coins from their purses on each turn and complete to buy merchandise tiles that offer up some type of reward or benefit, be it reputation (i.e. victory) points, universal tender that can be used toward buying any tile later in the game, the disposal of penalty tender (the designer calls it counterfeit coin) that is forced on everyone at the start of the game and competes for space in your hand with each coin draw from your supply, or privilege tokens that allow you to move ahead spaces on the reputation track. When tiles are purchased, the player who was second in funds committed to the tile wins a special seal as a consolation prize that allows them to draw extra coins out of their purse on a future turn. Occasionally tiles feature penalties to be assessed against all players other than the winning bidder when they are purchased.

Mercado frequently deals out little doses of “And there it goes; I’ve lost it.” disappointment that come from watching an opponent swoop in and buy a tile you’ve been slowly trying to acquire. Of course that means it also deals out, in equal measure, bright bursts of “AHA! I GOT IT FIRST” joy for the winning bidder who grabbed those tiles first. Mercado is this: cycles of joy and disappointment against a general backdrop of gratitude to be spending time with friends; a lot like how our real lives play out.

The artwork featured in the game is thematically appropriate but no one would recollect it as stunning. I had to go back and look at the tiles again just to remind myself what they looked like in prep for this review; that’s proof positive that the artwork didn’t make a big impression on me.

Components include the double sided reputation track board, cardboard tokens representing seals and privilege, cardboard tiles and player boards, bags with pull-string gathers for each player to use as their purse, wooden discs in 6 different colors that are used as currency, and wooden player score tokens. All of the components are sturdy enough to hold up to frequent use. 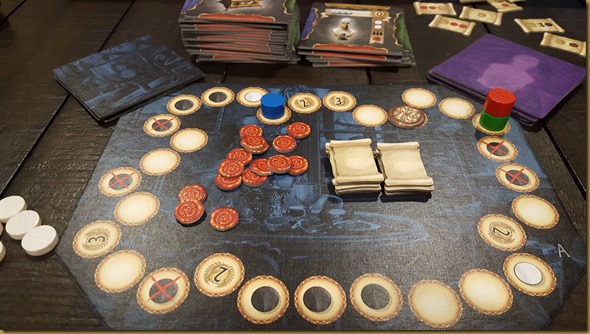 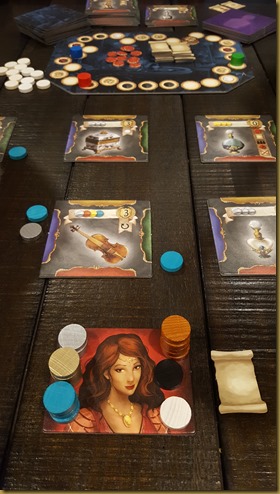 Mercado is a great filler game and it’s kid-friendly, which is a bonus in our household. This would especially be a great game to give friends or family who enjoy board games but gravitate toward lighter gameplay.

Publisher: Kosmos
Players: 2-4 (We played with 3 and 2)
Actual Playing Time (vs the guideline on the box): About 25 minutes per game
Game type: auction