Recently Japanime games sent me a copy of Heart of Crown. It’s a Japanese deck building game designed by Ginko (ぎんこ) that first debuted in 2011 and then was reprinted through a Kickstarter in 2016. 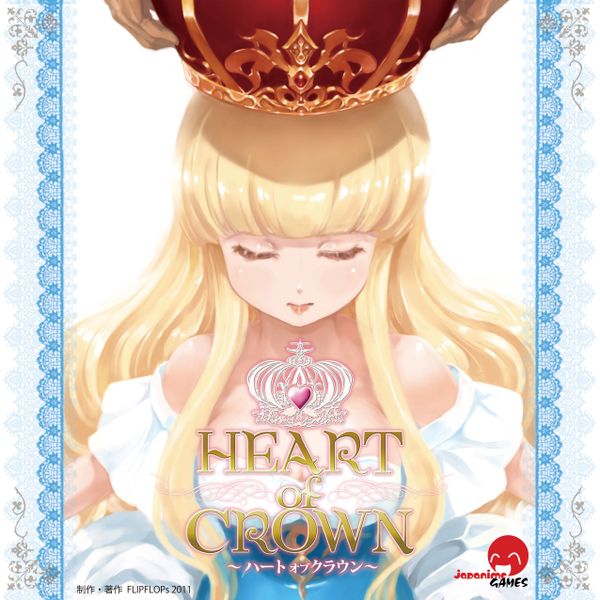 Heart of Crown  includes a handful of cardboard tokens and multiple card decks (which should hold up reasonably well under regular use, especially if sleeved) illustrated with family friendly anime. A small team of artists worked on the playful illustrations including  Haniwa, Yuji Himukai, Medilore, Chosuke O-ide, Yuki Takahata, and Nemigi Toto.

In the game, we learn that the royal kingdom has experienced a great loss in the death of its Emperor. Seven Princesses are thus vying to take over the kingdom and each player has a responsibility to select a princess (or the twin princesses) for the position and attempt to coronate her by accumulating a minimum of twenty succession points.

Every player is dealt a starting deck comprised of worthless filler cards (value: –2 succession points and 0 gold each) and territory cards (value: –2 succession points and 1 gold each). To prepare for the first turn, all players draw five cards from their deck immediately after the game begins. Turns rotate clockwise from the starting player and a player begins their turn by playing any applicable cards they wish to from their hand to the table, one at a time. After the first card is played, in order to play another card, the player must have a spot open next to a card already played with a > symbol on it as this indicates another card may follow it.  Cards that may be played include action cards that trigger the player to act, attack cards that trigger other players to act, and territory cards, which have a gold value associated with them.  Once all desired cards have been played, the gold value of the cards is totaled and can be used to purchase new cards from the marketplace. In addition to the action, attack, and territory cards already described, the marketplace also features defense cards (interrupts the action of attack cards other players play against you) and succession cards (variable succession point values). 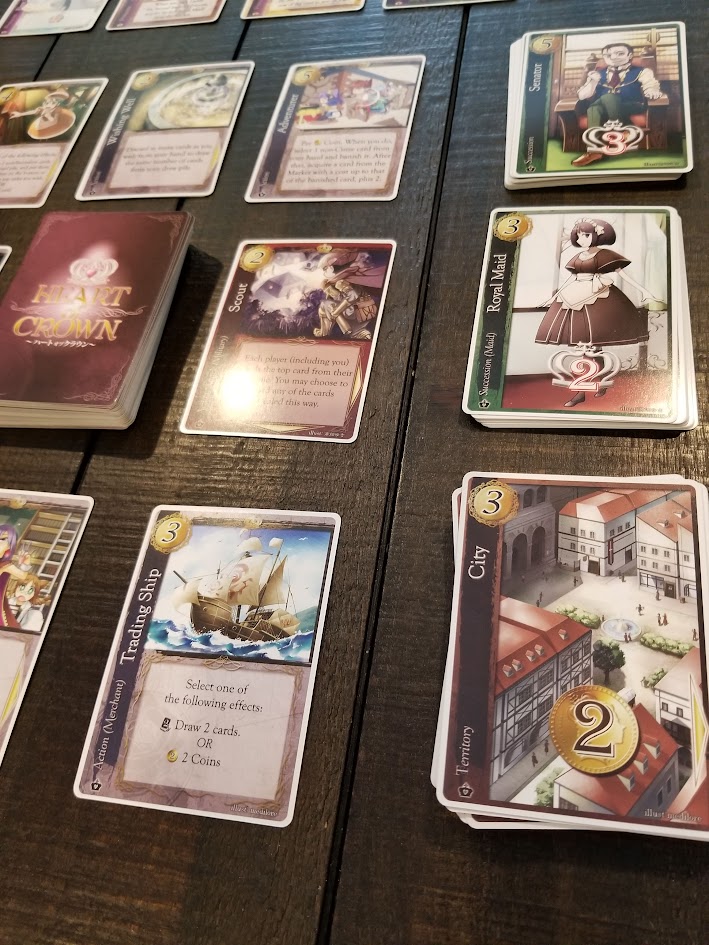 Once per game, on your turn, if you have enough gold (minimum :6), you can forgo the marketplace and buy a Princess card instead. To do this, you trade in your gold for the Princess (or twin princesses) card, lay the card in a tableau in front you (referred to as your domain), and lay the three territory cards with the highest gold values that you played this turn in the domain alongside your Princess card. 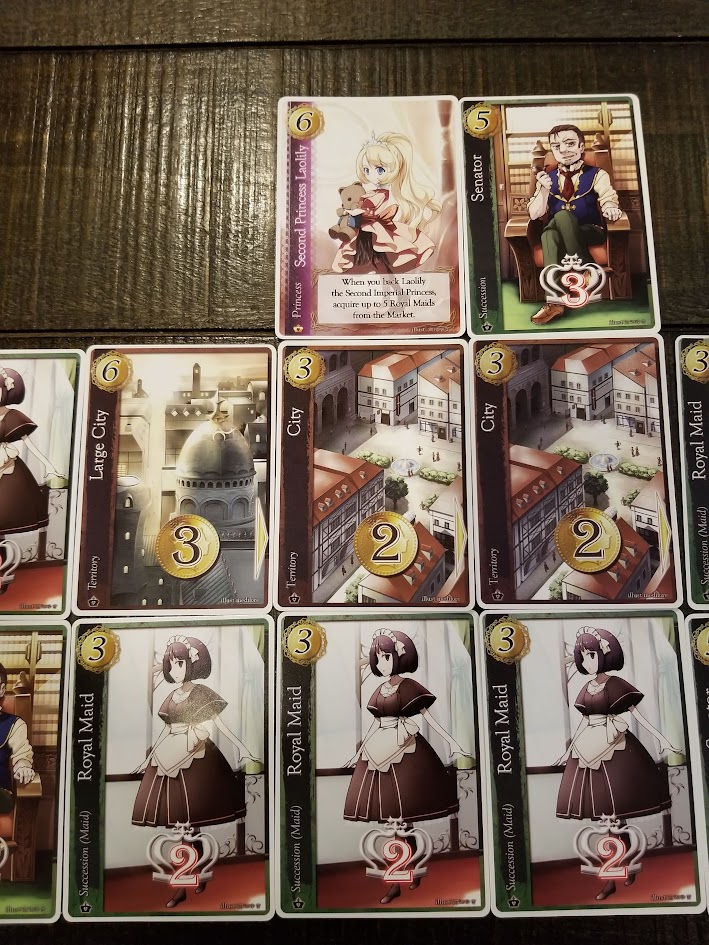 I didn’t find Heart of Crown to be subject to much analysis paralysis. Turns moved pretty quickly in every game I played.

For my first play of the game, I battled against my husband Christopher. As we laid out the marketplace, I noticed that my husband was carefully eyeing all of the cards and devising his perfect strategy. I wondered what would happen if I just sidestepped most of the marketplace and concentrated on buying succession cards as quickly as possible instead. It seemed too simple and obvious a strategy so I didn’t let myself get too excited over my plan; I just quietly worked toward the goal. As my husband focused each of his turns on selecting the best action cards, he didn’t seem to notice that I was using my turns to exclusively purchase city territory cards and then succession cards. As soon as I had 3 Senator cards (3 succession points each) and a Royal Maid card (2 succession points), I purchased Princess Laolily, whose special power is that she grants the purchaser 5 Royal Maid succession cards immediately. That gave me 21 succession points buried in my deck. After that, it was just a matter of adding succession cards to my domain each turn until I reached 20 and won the game. By the time Christopher realized what I was doing, it was too late for him to catch up. Success!

For the second game, Christopher and I played with two friends from our board gaming group. This time we all promised to play in the spirit of the game and make use of action cards. To stock the marketplace, we used the selection of cards recommended by the rulebook for players on their second game. These cards are more interactive then the ones recommended for first time play. The player who won focused more heavily on the “Draw 2” action cards than I did. In the first part of the game I was fairly competitive with him as I had a lot of cards that gave me extra coins so I had about the same purchasing power with my smaller hand that he did with his larger hand. However, in the second half of the game where we were in a race to lay down our succession cards, his ability to cycle through his deck faster proved to be a significant advantage and he was able to make it to 20 points before any of us.

What I really enjoy about Heart of Crown is that it employs female leads. It’s nice to see a game centered on bringing women to power (even if they are cutesy princesses).  I also like that it’s not framed as a typical good vs evil storyline but instead a race among qualified competitors to the finish. Nobody has to take on the role of the bad guy. And by the way, the game is kid friendly, which is great because that means we can play it with the whole family on game night.

Heart of Crown is easy to learn, more relaxing than other deck builders like Dominion (the decisions aren’t as difficult with regard to when to switch from actions to point collection), not prone to AP, and highly replayable thanks to several different card types and many expansions. It’s earned a spot in our collection.

Publisher: Japanime Games
Players: 2-4 (we played with 2 and 4)
Actual Playing Time (vs the guideline on the box): About 45 minutes
Game type: Card Drafting, Deck Building