May 30, 2019
Given the reputation of Mindclash Games as a producer of well themed and sufficiently complex games, I was quite optimistic about getting Cerebria: The Card Game on the table. Designed by István Pócsi and Frigyes Schőberl, the game was released in 2018, and it was due to arrive on my doorstep in March.
Once the box arrived and I saw the cutesy artwork by Villő Farkas, Jamie Sichel, and Pedro A. Alberto, I prepared a little space in my heart for the love of the game that was already starting to develop. The illustrations are playful, family friendly, and reflect the theme very well. 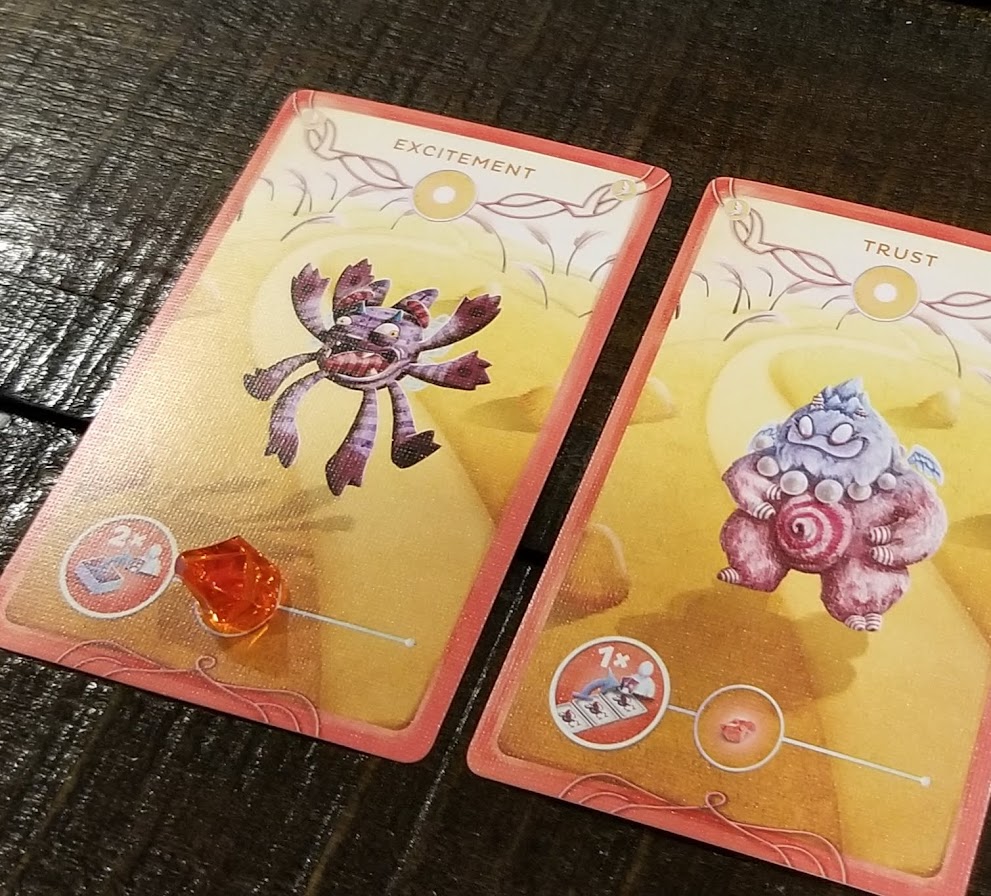 In Cerebria: The Card Game, we are organizing and controlling our emotions while toying with the emotions of others. The theming overlaid on the gameplay here works well with regard to what we are doing with our actions, but there is no explanation of who we are or why we are in this situation we find ourselves. I would have liked to see a better developed contextual narrative for the game.
Thanks to busy spring work schedules, it took a bit of time to gather friends over to play. The first game came together at the last minute when my friend Aaron was in town visiting for the weekend and our regular gaming friends John and Meagan dropped by. The five of us crowded around our gaming table, my husband Christopher explained the rules, and then we went at it.
To play the game, cards are pulled out of the main deck to form three decks laid out in vertical columns and the card at the top of each deck is flipped over and available to draw. Every player is dealt four cards. Players take turns drawing from one of the face up cards to their hand, playing cards from their hand to their personal tableau and collecting emotion fragments (blue fragments for gloom and orange fragments for bliss) on those cards if possible (some cards don’t collect fragments but have other special abilities), or both (two actions are mandatory each turn). 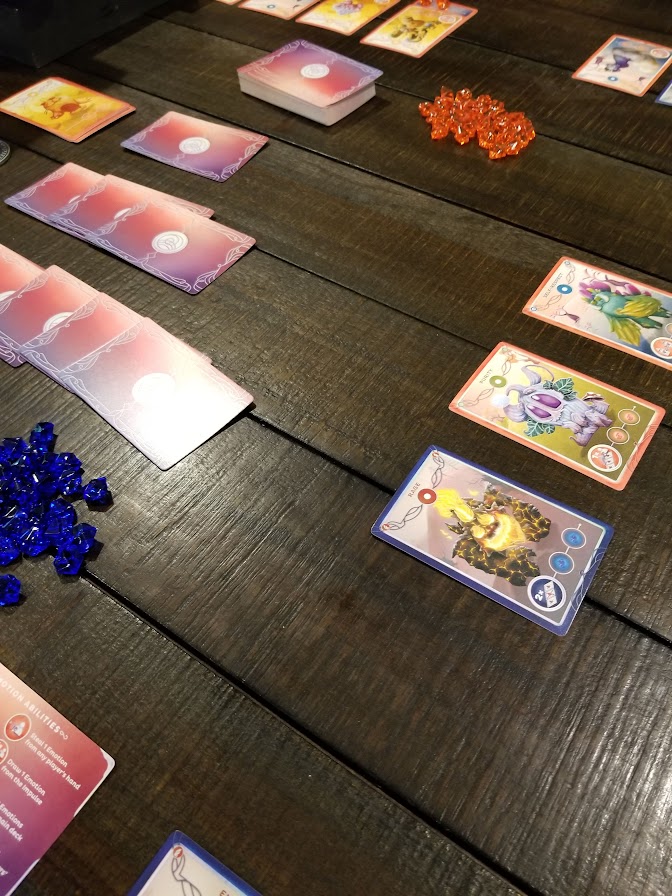 During a turn, a player may also activate emotion abilities of eligible cards in their tableau. These abilities involve actions that directly benefit the player, take-that actions that hurt other players, or combo actions that manage to do both at once. Gameplay moves pretty quickly and is not subject to much analysis paralysis. A round ends when any of the three draw piles is empty. At that juncture, all the emotion fragments collected in each player’s tableau are squirreled away to their personal cache and any bonus fragments are awarded to players (emotion cards have vibe symbols on them and bonus fragments are awarded for tableaus that meet set collection goals such as three different vibes or four identical vibes). If any player has amassed either twelve of the same color emotion fragments or seven of each color, they win and the game ends. If not, the game resets with the discard of any existing face up cards, replenishment of the three vertical decks, and all players drawing back up to (or discarding down to) four cards. Then play resumes and unfolds as in the previous round. 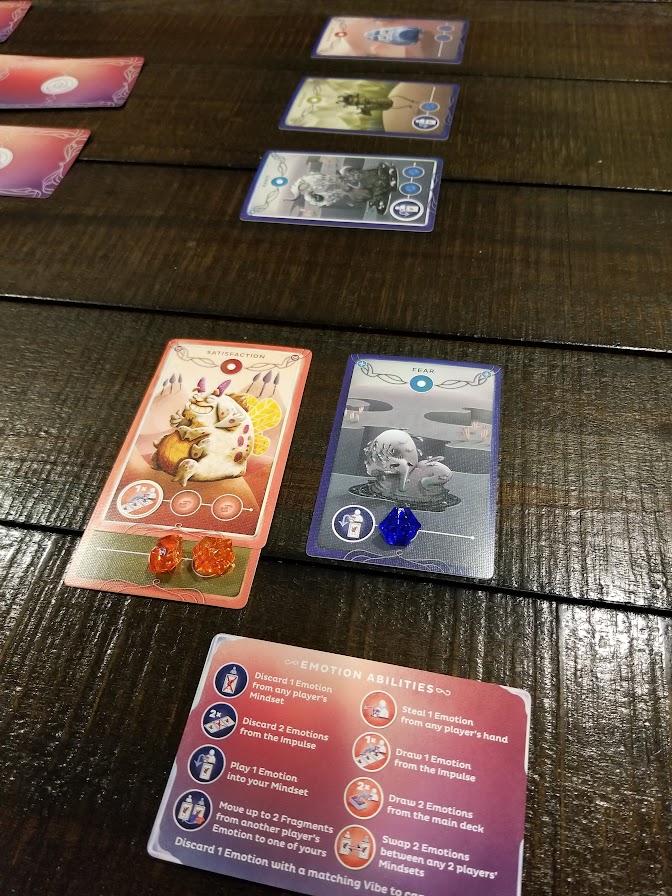 None of us are really fond of “take that” games, so the more aggressive and vindictive emotion abilities our cards presented us with weren’t used as frequently as they might have been with a different group of players. But that didn’t stop anyone from winning the game as the game has a lot of room for creative strategies and there are multiple paths to victory.

Subsequent games I played with other groups were just as enjoyable. This week, for example, I played a 4 player game at a youth center with three teens and everyone had a good time. There was a bit more time required before the under 16 crowd really understood the rules and how everything fit together but overall it went well. There were definitely more take-that actions taken by the teens than any of the adults I played with.

Components for Cerebria: The Card Game  include glossy cards and some plastic tokens representing emotional fragments. Everything should hold up to regular use and all components can be stored compactly in the well made, small box provided.
I really enjoyed the game and the interactions it provoked between players. If your group enjoys take-that games, you can really turn the screws to your opponents and if your group wants to steer clear of such tactics you can just as easily play and win the game without striking out against others. The theming here is unique. Other than Cerebria (also from this publisher), there aren’t any current games dealing with organizing and handling emotions. It’s a great way to remind ourselves that we can control our emotional mindset by choosing what we focus on, regardless of what emotions pass through our minds.
This easy to learn, quick playing, well-illustrated, clever game has earned a forever home in my collection.
-------------------------------------------------
Publisher: Mindclash Games
Players: 2-5
Actual Playing Time (vs the guideline on the box): About 45 minutes
Game type: set collection, take-that
Rating: