In late February, five members of NoVA Travelers (including myself) dashed off to Napa Valley for dinner at The French Laundry.  At the helm as owner and head chef is the famed Thomas Keller. Our travel group has previously dined at Per Se (another Keller restaurant in NYC) and we had been trying to get a reservation in Napa for months without success. Because of its reputation, reservations are terribly difficult to come by: The French Laundry was named best restaurant in the Americas in 2009; Best Restaurant in the World in 2003 and 2004 and has been awarded 3 Michelin stars.

Compounding the reservation difficulties, the restaurant only opens reservations two months in advance, has just one seating an evening, and a very limited number of tables. Coordinating several member’s schedules, airfare sales and the limited reservation opportunities led me to weaken my hope in ever obtaining a table in the next few years. However, we got a lucky break – The French Laundry is closed each January and as such their primary mode of taking reservations (via their phone line which is open a few hours each day requiring frantic foodies to redial like teens in a Top 40 radio contest) was unavailable. That left more spots open for the taking through their secondary reservation channel- opentable.com. We were able to nail a reservation for Monday the 22nd of February with relative ease. Success!

Rick, Marian, Chich, Jacob and I arrived in San Francisco Sunday evening, picked up our rental car and headed for our resort hotel in Napa. We lodged at Vino Bello resort, situation in the heart of wine country with a vineyard on site. The property also boasts a full service spa, a couple of restaurants, and lovely decor.

Monday morning and afternoon I (sadly) had to play responsible adult and work from our hotel room while my fellow members participated in a winery tour that Jacob organized. (I consider him our resident wine expert in the group along with Penny Younce). I did have time to reward myself with a walk on the grounds and spa massage when I finished my work so I was pleased.

The French Laundry awaited us that evening. The property is beautiful, with flowers to greet guests and a full vegetable garden onsite at the disposal of the chef. In the 1920s the building was operated as a French laundry, hence the restaurant's name.

The restaurant offers a choice of prix fixe menus each evening- one standard and one vegetable. Chich and Marian opted for the vegetable menu while the men and I enjoyed the standard menu. Everyone was pleased with their meal by all accounts. Below is a pictorial account of our lovely evening. 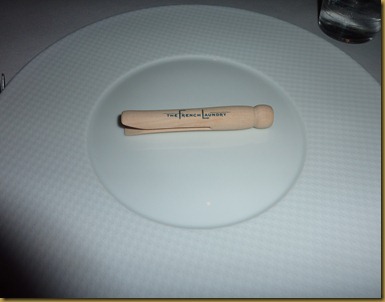 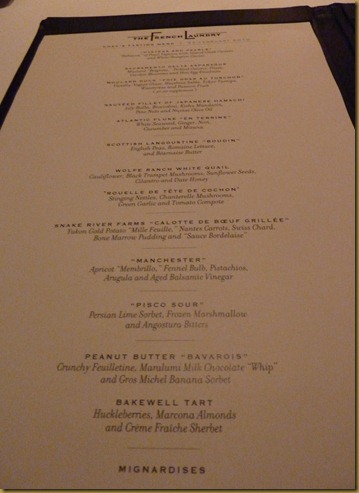 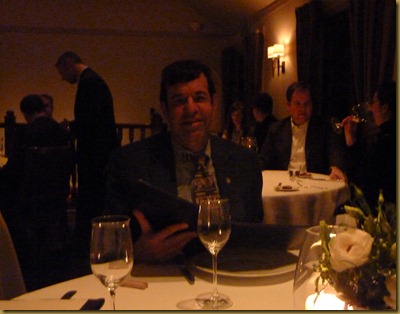 Rick reviews the menu. See the man seated behind and to the left of Rick? The one with his back to us that the waiter is talking to? He became a ‘special’ friend of our table, introducing himself and his wife halfway through our meal, chatting us up and toasting us from where he sat. We found it amusing, but the French couple (to the right behind Rick) was not as amenable to the chatty and tipsy man. 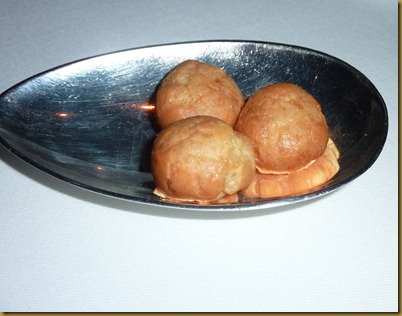 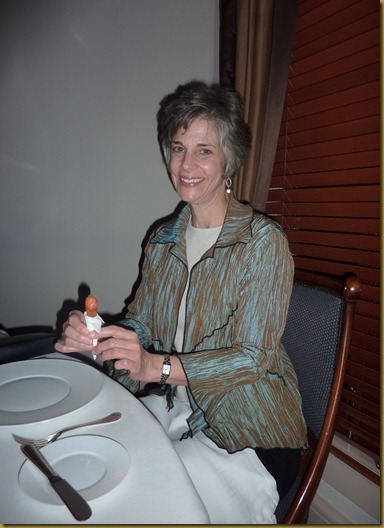 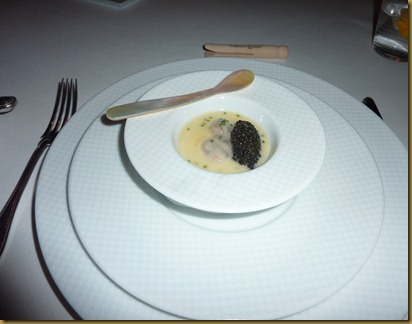 Course I: Oysters and Pearls
Sabayon of pearl tapioca with island creek oysters and white sturgeon caviar…This was hands-down the best thing I have ever tasted 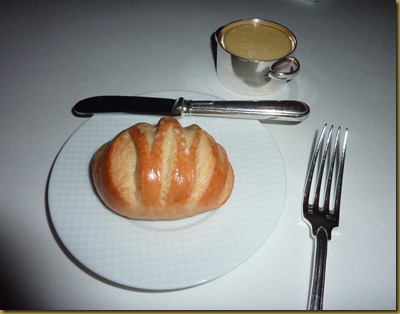 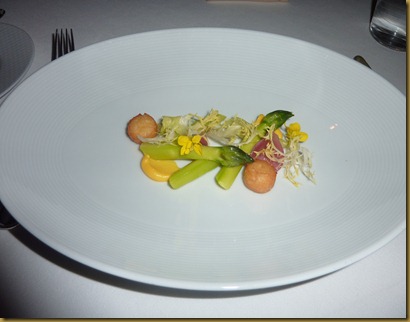 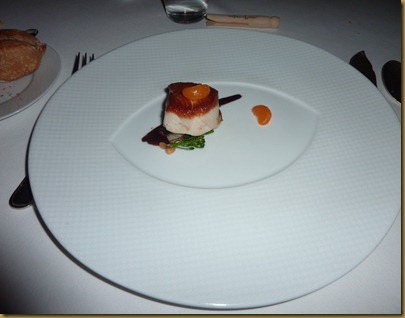 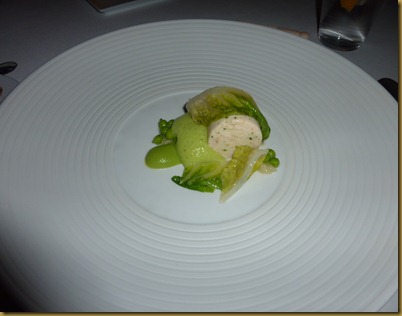 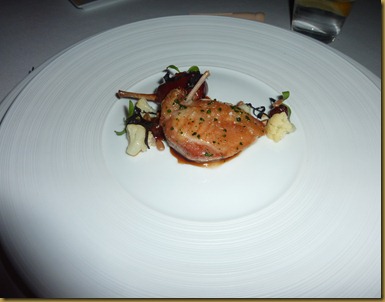 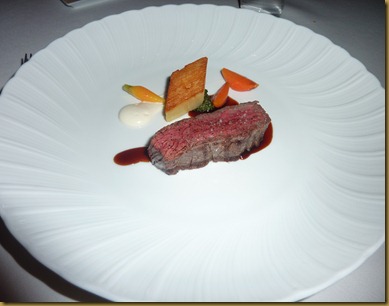 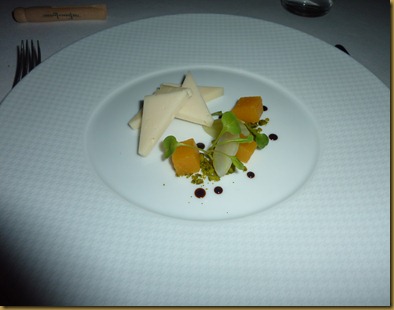 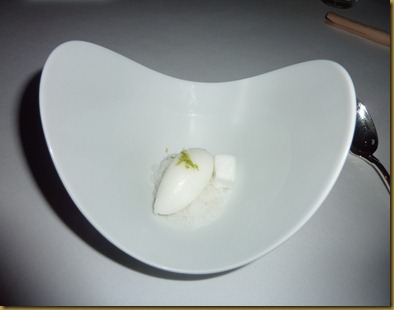 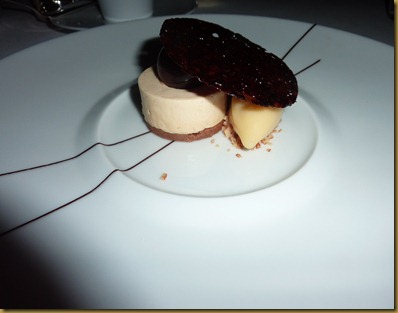 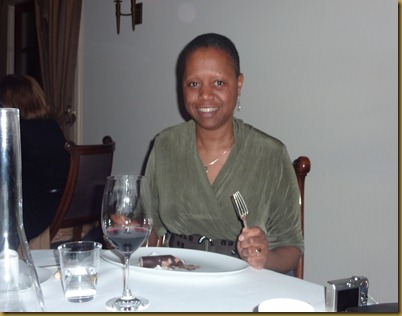 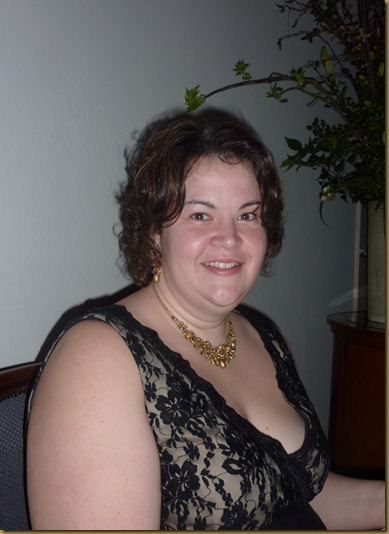 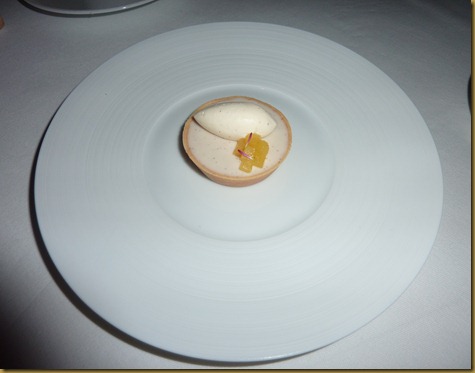 Course X: A dessert to follow dessert. Some sort of fantastic coconut creme. It was right about this time during the meal that a gentleman (celebrating his wedding anniversary with his wife) two tables away that had previously struck up a friendly yet LOUD conversation across the restaurant with us stomped over to our table intoxicated and punched Jacob. (I am not making this up). He was upset at something Rich said about soaking the rich with taxes to make them pay their fair share. Rich had offered this commentary in response to the man’s question on how Rich thought we might be able to repair our economy (the sociable man had asked Rich for his expert opinion after finding out Rich has a background in economics). I’m not at all sure why the man punched Jacob instead of Rich but the whole experience was surreal. The man then went back to his table as if nothing had happened and apologized to the rest of the restaurant for being loud. 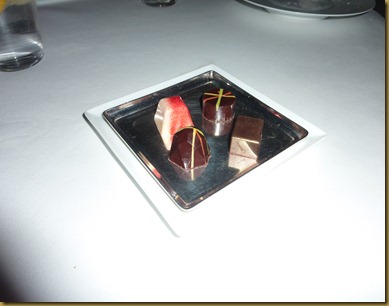 Course XI: chocolates to follow dessert: cinnamon, brown sugar, liquor. This course and the next were served with aggravated looks by the servers. Like it was our fault the drunk guy was yelling at our table. Pfft. 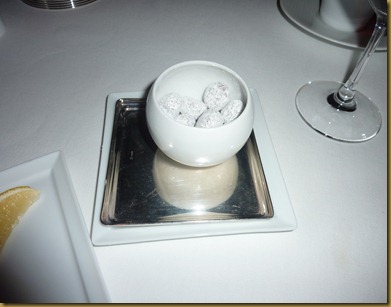 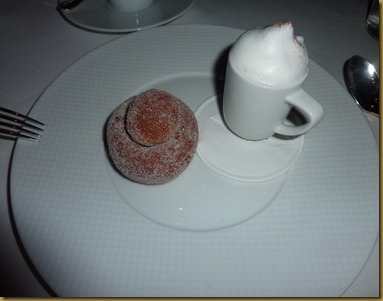 Course XIII: French Laundry signature sugar donut and coffee ice cream to follow our nuts that followed our chocolates that followed dessert. This course is the famous final course at every dinner in the restaurant. It is not advertised; you must ask for it. However when our table did so we were told with a frown that it wasn’t available and would take 20 minutes or more to make (they clearly were wanting to shoo us out). No way we were coming to TFL and missing out on the signature dish so we volunteered with a smile to wait, calling their bluff. Just seven minutes later they presented the dish. 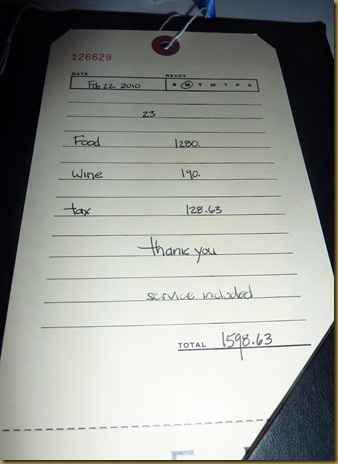 The only unappetizing part of our meal: the bill. Ouch!

It was a late evening drive back to the resort and then we flew home Tuesday morning.  Absolutely an unforgettable experience and the food was amazing. And a lesson: be careful when talking politics with strangers over dinner.

I’m on a mission to visit as many of the Top 25 restaurants in the world as possible over the next few years. If you’ve got the budget and inclination to join me please drop me an email so I can add you to the short list of folks to call when a reservation opens up.