Jonathan and I have been to the Outer Banks of North Carolina twice previously and in May we took a third go of it, this time with my in-laws.

In 2005 we drove to Corolla, NC with my good friend Tara, who was visiting us from Colorado. (Tara and I were childhood friends living across the street from each other.) Mapquest advised that it was a simple 5 hour drive to this northern section of the Outer Banks so we left on a Saturday morning at eight a.m. Our ignorance of mid-atlantic traffic was revealed with an arrival into Corolla after 5pm. Crazy! We had driven all that way and only had about an hour or two to enjoy the sand and sun before it was time to head back for VA. Despite the traffic and the disaster of locking our keys in the car (with USAA having to come out and rescue us), the beach was so beautiful that I knew I wanted to go back for a longer stay.

And go back I did. There was no way I could afford to rent a fabulous beach house in Corolla on my own (at $2k minimum a week, no way) so I assembled a group of interested parties to chip in together for the rental. This was summer 2006. We had a lovely yellow beach house in a beautiful area of Corolla for a full week over the 4th of July holiday and I was thrilled with the getaway.

Two years ago I received a book for Christmas entitled Journeys of a Lifetime: 500 of the World’s Greatest Trips. One section of the book is devoted to road trips, including a tour of the southern Outer Banks from Kill Devil Hills down to Ocracoke, NC. Reading over the suggested itinerary kindled my interest in visiting the southern section of the OB and I put together an itinerary patterned after the book.

My lucky ship came in when my in-laws announced they were dropping in for a visit last spring and my husband suggested we take them to the Outer Banks over the weekend. That gave me the perfect opportunity to bring my itinerary to life.

The second week in May we piled in the car for the ocean road trip. I was a bit tired of driving after the previous weekend’s road trip to Kentucky, but otherwise looked forward to the weekend. Friday we drove to Kill Devil Hills and checked in at the scenic Cypress House Inn. It’s a quaint bed and breakfast situated down the road from the ocean beach. 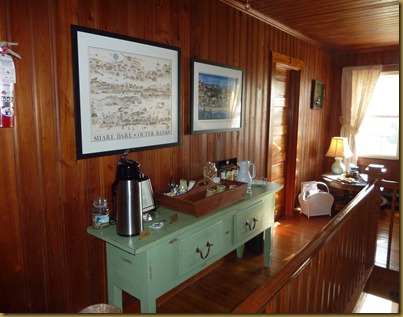 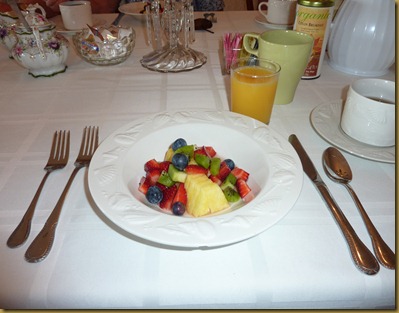 We enjoyed a relaxing dinner at the Kill Devil Grill. I recall that I found the food appetizing but my strongest memory is how disappointed Jonathan was that the chef was out of the half-roasted chicken that he had been hoping to try. It was like taking a lollipop away from a 6 year old.

The next day we took a meandering drive down to Ocracoke, stopping at the Wright Brothers Memorial in Kitty Hawk, Bodie Island Lighthouse (under renovation so we have no pictures), Cape Hatteras Lighthouse and the Ocracoke Lighthouse. This southern section of the Outer Banks holds a lot of history- land that Amerigo Vespucci stepped upon, land where the first airplane flight took place, land where American engineers proved their might by moving a cherished lighthouse lock, stock, and barrel 1/4 of a mile to protect it from the encroaching sea.

The WB memorial took up most of the morning as we stayed to not only walk the memorial grounds but also to take in a presentation on the Wright Brothers and the history of flight. Turns out that my husband and in-laws were really enthralled with this stop and so that was rewarding. At each lighthouse we stopped to take pictures and tour the gift shops. I’d originally planned to tour the Chicamacomico Life-Saving Station Historic Site  (the precursor to the Coast Guard) and had built up the experience as one of the highlights of our weekend when promoting the itinerary to my in-laws. So of course when we arrived at the site and found it was closed my father-in-law delighted in poking fun at my failure to deliver a promised gem of the trip. (He didn’t particularly have deep disappointment; he just likes to torment me because it’s so easy since I’m sensitive.) 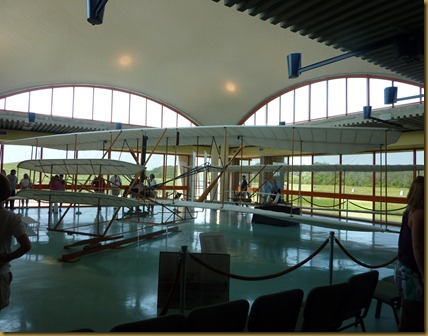 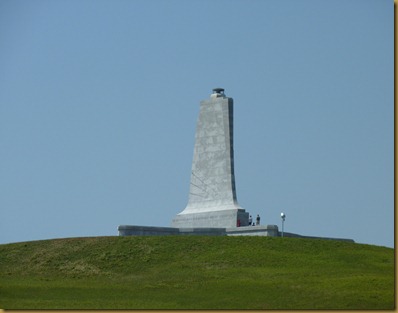 WB Memorial, marking the spot where the first flight occurred 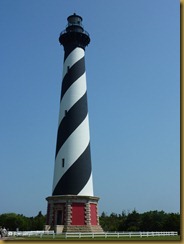 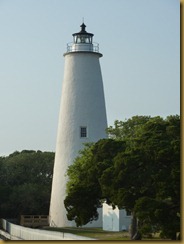 We had planned to save money by staying a cheap motel in Ocracoke but the proprietor of the Cypress House recommended another Bed and Breakfast (Thurston House) so after a quick vote (in which the ladies had veto power) we opted for the recommended B&B instead. They had a hammock; I was very happy. 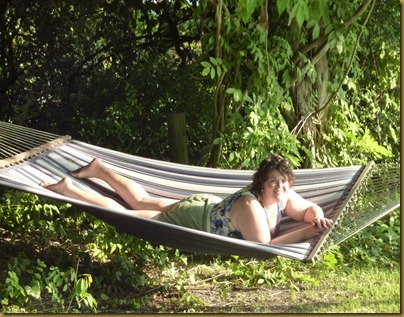 On Sunday we wove our way back to VA, detouring to Roanoke Island along the way (home of The Lost Colony). We learned a bit of history about the colonists and toured the Elizabethan Gardens before stopping for dinner at the Lone Cedar Café (delicious fresh seafood but very slow service) in Nags Head. 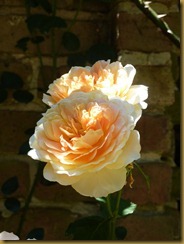 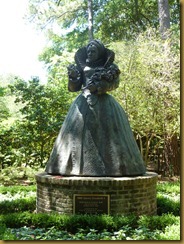 roses (l) and the garden’s claim to fame: largest statue of Queen Elizabeth in the world (r) 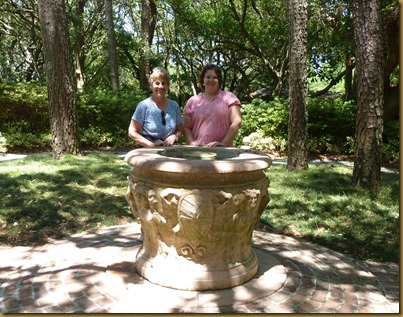 Mom Parks and I pose as ladies of the garden 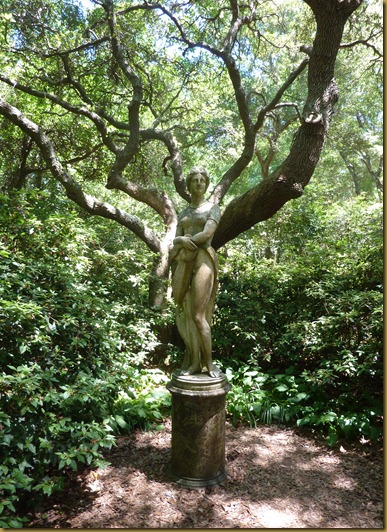 Italian sculpture donated to the garden 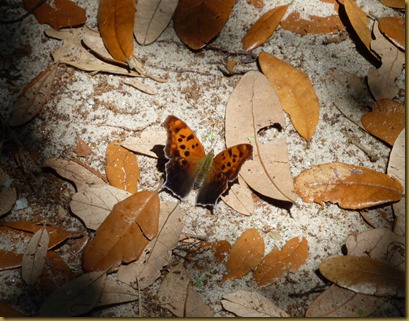 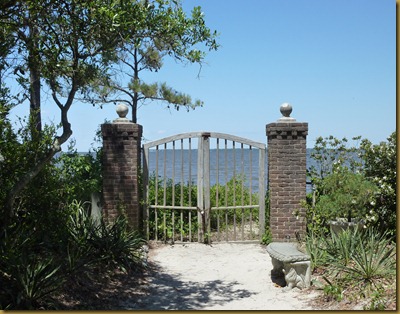 gateway to the sea 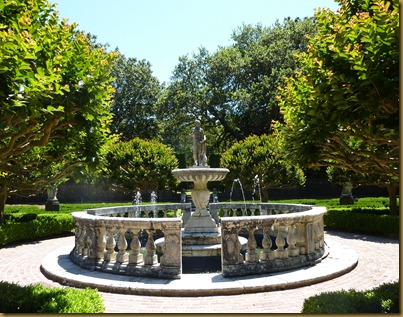 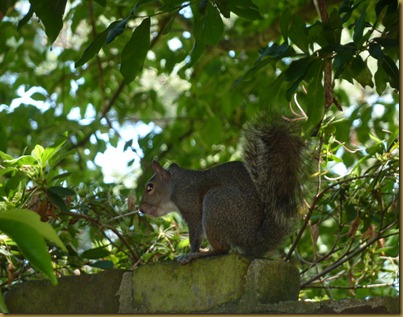 After dinner we did a final pit stop at Jockey's Ridge nearby to try and catch the final glimpses of the sunset from the top of the tallest sand dunes on the East coast over the ocean. From there it was a long sleepy drive back home. 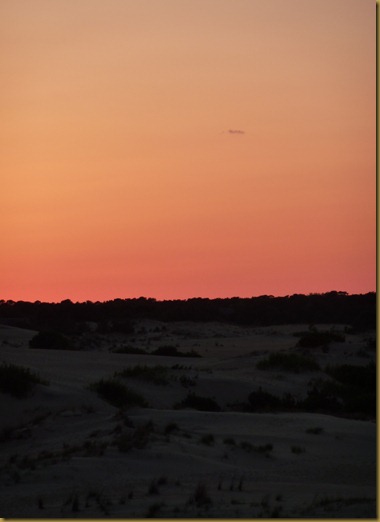