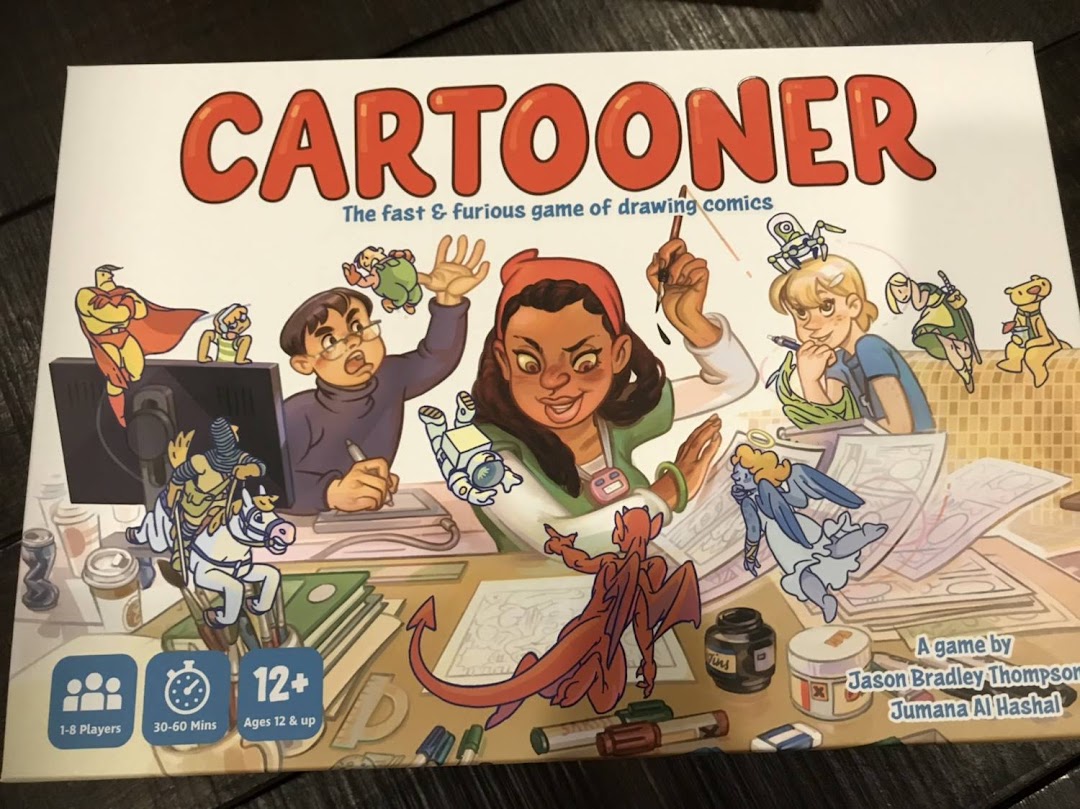 Japanime recently sent me a review copy of their storytelling game Cartooner  from designer Jason Thompson, and as soon as I read the detailed description of this real-time drawing game I was a bit anxious about playing it. In Cartooner , players take on the role of cartoonists tasked with creating comic strips that carry their artistic vision and the narrative demands of their readers. I am a terrible artist. Stick figure level artistry, if we are being honest. My fragile ego doesn’t always react well to attempting tasks I am terrible at (hello shame and feelings of self-loathing). But all three of my kids love to draw and were quite excited about the game so I reluctantly brought Cartooner to the table one recent afternoon and we gave it a go as a family.

In the first round of the game each player is dealt three theme cards which represent their core artistic vision and they must draw a comic strip with two panels during the allotted time period (in student mode, which we played under, it’s eight minutes). Fame points are awarded for drawing in every panel (scribbles don’t count), incorporating the themes, and using no more than three word balloons (unlimited sound effects and symbols are allowed). In the second through fourth rounds, the rules and point qualifications are the same except that there are additional panels that must be filled (four panels total in the 2nd round, six in the 3rd, and eight in the 4th), the storyline must logically follow from the first round’s comic strip, and additional fame points are available for adhering to the guidelines on selected trend cards which represent the content demands of our comic strip readers. 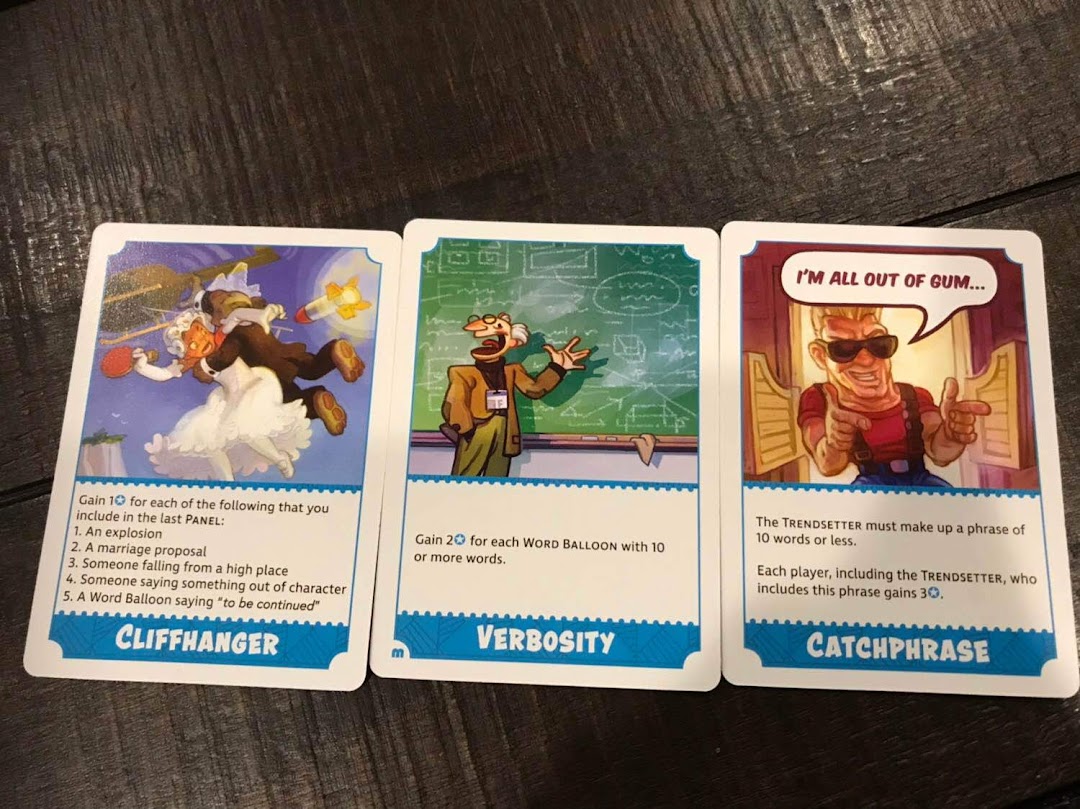 After each round of Cartooner, fame points are awarded to players by the consensus of all competitors as to how well each player qualified. At the end of the 4th round, the player with the most fame points is declared the winner.

Components include 136 theme cards, 52 trend cards, 160 fame tokens, 64 pages for drawing comics, and the rulebook. Everything should hold up well under typical usage. There are colorful illustrations from Konstantin Pogorelov on the trend cards and the cover box but as this is a game designed for the players to create their own artwork, illustrations and print design are otherwise quite limited. Players will want to photocopy the comic book pages (or order additional books from the publisher) as the initial supply extends only to four games, assuming four players each game.

I was a ball of self-doubt going into round one as everyone began drawing, but once my storyline starting flowing out of my pen, I got lost in the creative process and really began to enjoy myself. Over each successive round I cared less and less that my drawings were Highlights magazine submission quality. I was heavily invested in the development of my characters and the evolution of my storyline. I also took a lot of pleasure in reading the comics of my competitors. Everyone did an amazing job with their strips and the stories were funny and fascinating.

My husband Chris drew a comic strip about a deadly virus, the bad guys who want to unleash it, and the team out to save the world from it. Our son Locke created a lighthearted strip about puppets dancing in space while our other son Max devised a comic about an agoraphobic lock that was being pursued by evil keys wanting to pry it open. Our daughter Helenipa shared her thieving ghosts at the heart of her comic strip and I terrified everyone with my tale of the unfortunate twins separated at birth who are reunited only when the one left at the orphanage returns to seek vengeance. 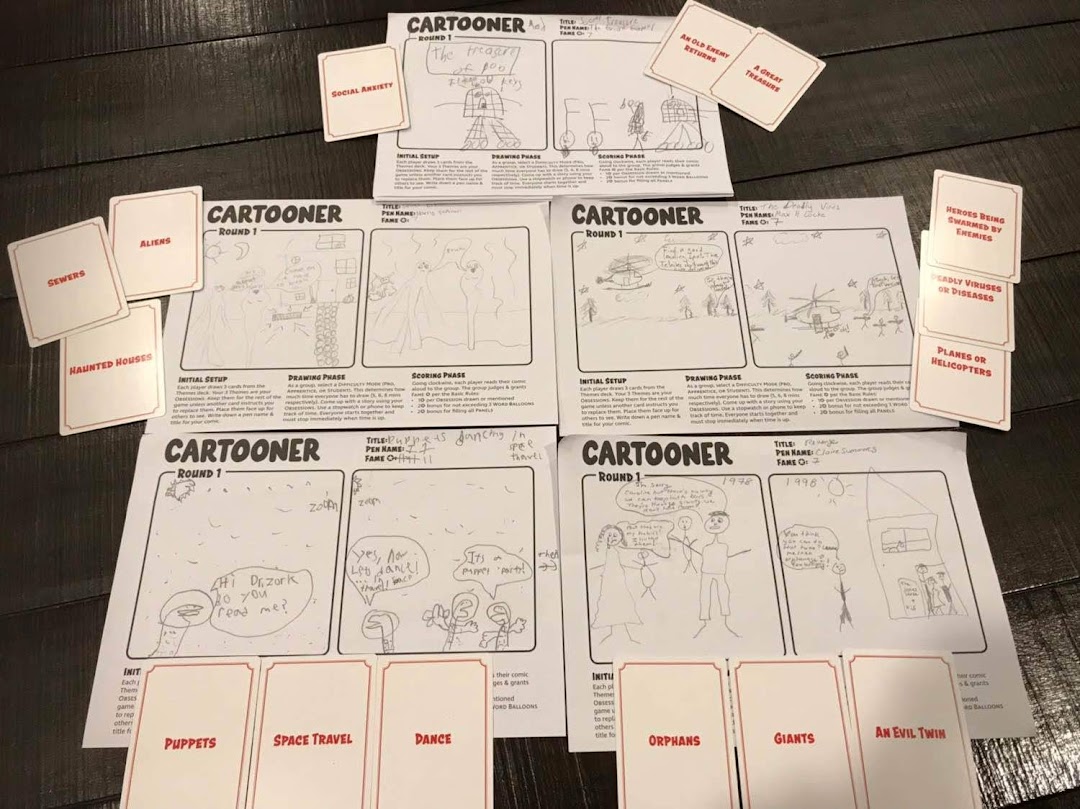 By the time we were finished, we didn’t even care much about the points and winning. We were really happy with our stories and the experience of sharing them. No one at our game table experienced any analysis paralysis but there was a low-level undercurrent of anxiety that progressively increased each round as we all wondered if we would get our panels completed before the time ran out (spoiler: we frequently didn’t).

Cartooner is the re-implementation of a previously released game, Mangaka, from the same designer and publisher. Therefore, while its mechanisms are not unique, the subject matter has shifted from anime to American style comic strips. This is a significant enough change to justify adding Cartooner  to your collection, even if you already own Mangaka. If you’re trying to decide between the two, note that Cartooner  features simpler themes and trends that will appeal to a broader age base and cultural demographic. We only needed to remove a handful of cards to keep the game family-friendly.

I’m really glad I pushed through my anxiety and played Cartooner. It’s a great game for stimulating creative ideas, building a cohesive narrative, and honing the ability to work under tight deadlines. The sharing portion of each round fosters good will and allows players to encourage and build up one another, making it a great family game or even a good icebreaker for less familiar groups. This is definitely a game that’s going to come out to our gaming table again and again.