Board Game Review: Shadows in Kyoto

That second slice of cheesecake when the Cheesecake factory was running their $0.88 a slice promo. The late night boardgame marathon when I had to work early the next morning. Hosting a dinner party every night for 12 days during the 12 days of Christmas. I fell in love with the idea of all these things, but once I experienced them, I realized they were mismatched to my temperament. They were so enticing, and they whispered to me with promises of fun, but I couldn’t love them the way I wanted to. That’s what Shadows in Kyoto did to me too. I picked up a copy of the game based solely on the artwork. It’s beautiful, as we have come to expect from Maisherly Chan. I should have known what I was getting into because we already own other games that lean heavily toward the abstract - such as Hanamikoji (another game for which Maisherly provided artwork; see my review for it here: https://boardgamegeek.com/thread/1718238/what-jenni-said-about-hanamikoji) - and I have never come to love those games the way I do others in my collection. Perhaps it is because my frustration tolerance is pretty low for repeatedly losing game after game and that’s what happens with these 2-player abstract games in my collection. I play them against my husband (who holds a PhD in statistics) and I bend and twist and strain my brain to outwit him and it doesn’t work. I just end up with a headache and feelings of self-loathing. That’s exactly what happened every time we played Shadows in Kyoto. 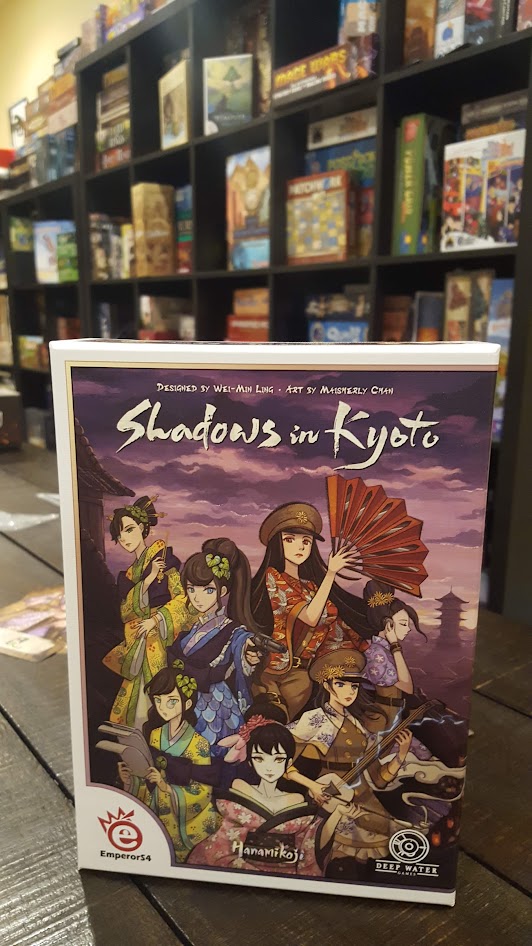 The game puts players in the roles of Spy vs Spy in a battle between Oniwaban agents (backed by the Japanese Shogunate or military government) and ones employed by the new government that replaced the Shogunate. It’s a great theme that wraps around the strategic gameplay well. In our household there was much speculation as to whether the designers started with the historic theme and designed a game that fit it or created a theme around an abstract game they designed first.

The components are well made and include a sturdy center board, high quality thick cards, and wooden pawns. 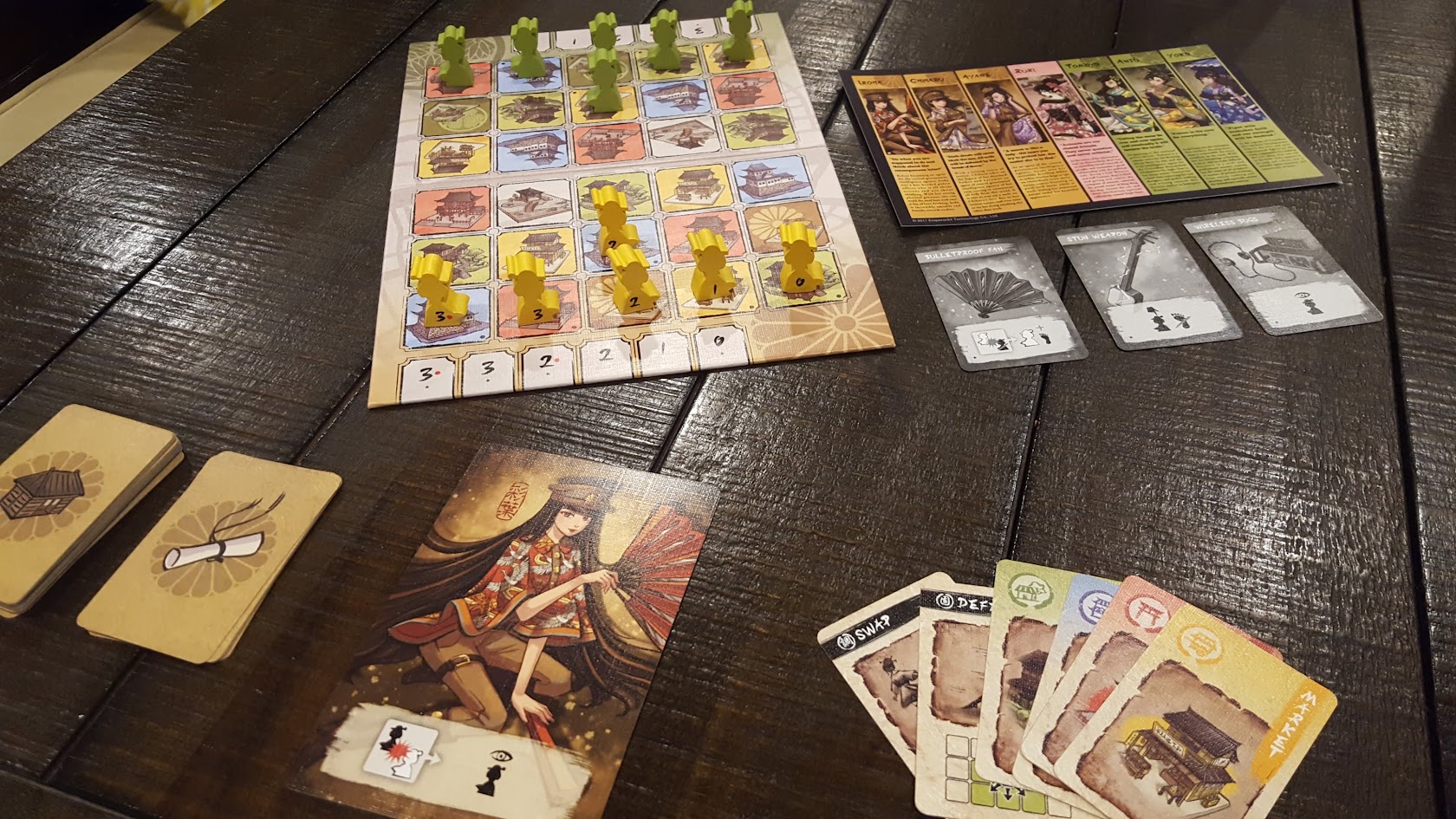 The gameplay for Shadows in Kyoto is deceptively straightforward. Each player places their six pawns on the six starting locations on their side of the board as they see fit, with the markings for which ones are carrying real intelligence and which ones are carrying fake intelligence facing the player, so that the opposing player cannot see the markings. To win, a player must complete one of the following objectives:

Movement is controlled, in part, by playing location cards, which allows players to move to the designated type of space, following the movement rules (move only forward, move only 1 space at a time, cannot move into a space already occupied by your own agent). 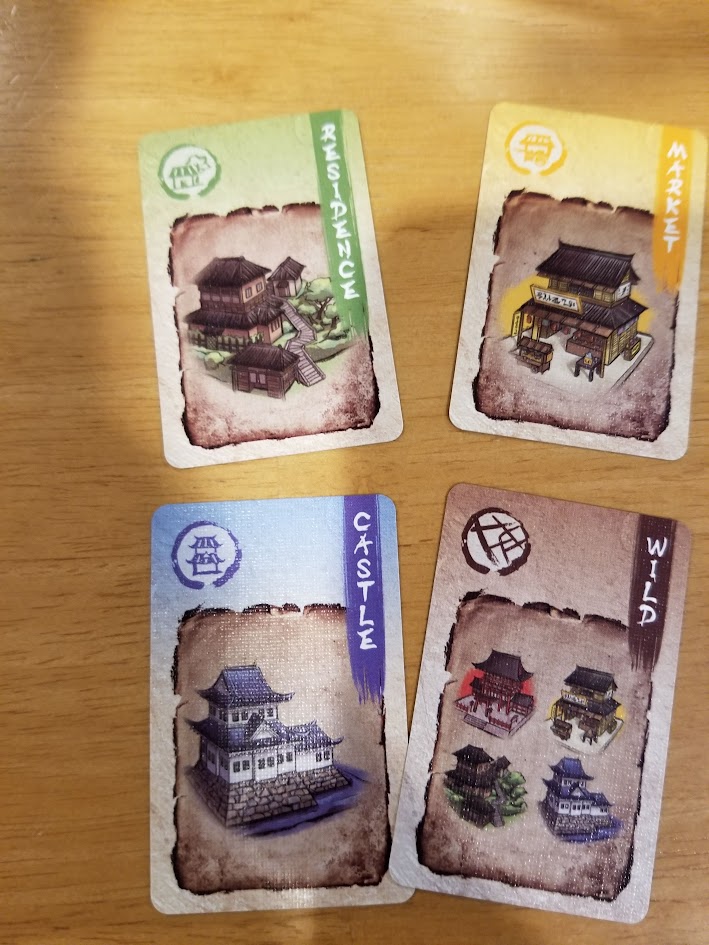 Instead of playing a location card, players can also play tactic cards that trigger movement. 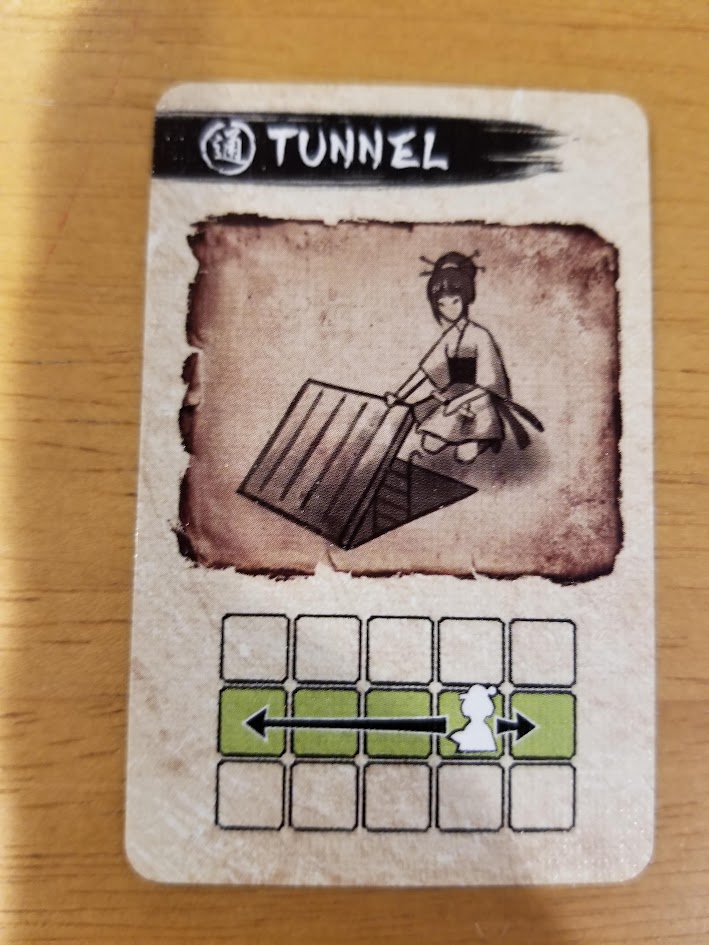 For example, the tunnel card allows a player to move any 1 of their agents horizontally to any other space on the same row, stopped only by an encounter with another pawn.

To spice up the game, Shadows in Kyoto also includes Charisma and Equipment cards. 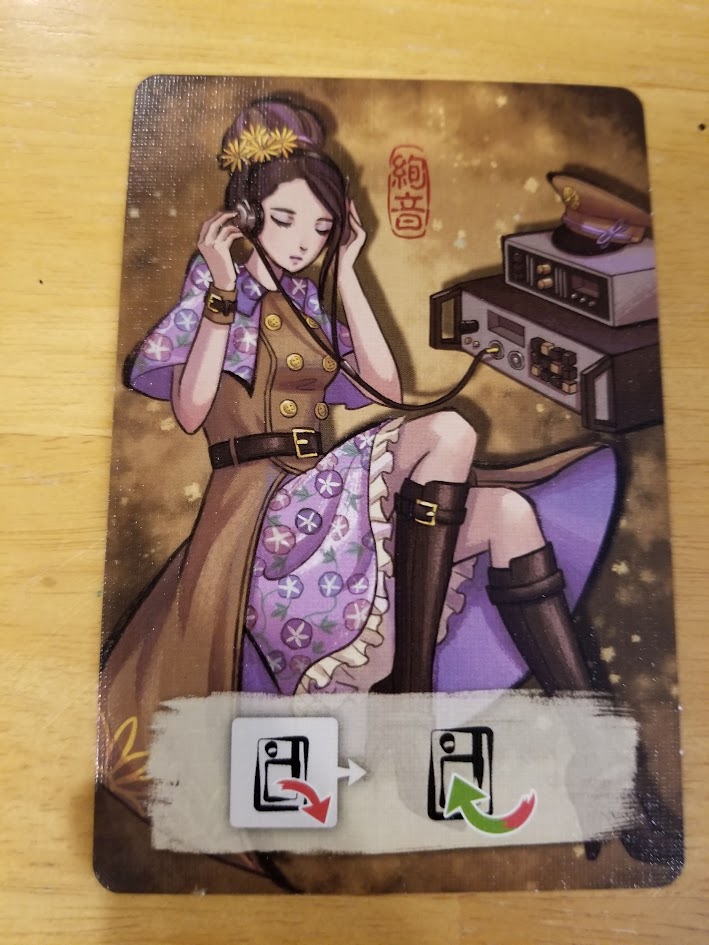 These cards can be distributed to the players to provide enhanced powers or abilities that alter some aspect of the rules in favor of the player. For example, the Ayane card allows a player to return a location card to their hand after playing it instead of putting in their discard pile.

No matter which way I placed my pawns initially, my husband was able to deduce my hidden information (i.e. the markings on the back of my pawns) after just a few encounters or find a way to move one of his agents carrying real intel quickly to the back row of my board. Again and again, I tried to make some kind of strategic progress and always failed to do so. I wanted to cry. I’m pretty sure I did cry at one point.

How could something with so few components and such basic rules be so difficult? Really, that’s the beauty of the game, if you’re one for elegant logic puzzles. In this way, Shadows in Kyoto is a fantastic game that should be highly appreciated by its target audience. It’s simple to learn, plays quickly, and requires a great deal of reasoning and strategy, both in the initial placement of one’s pawns and the ensuing gameplay. And the artwork is an exquisite bonus. The game’s just not right for me though, and that’s why I’m giving it one “oui”.