Board Game Review: Mystery of the Temples

Deep Water Games provided me a review copy of Mystery of The Temples , an abstract area control game designed by Wei-Min Ling. It's one of three games in my collection from the Deep Water Games catalog that were originally published by EmperorS4 and feature artwork by Maisherly Chan (Shadows in Kyoto and Hanamikoji are the other two).

In Mystery of the Temples, players take on the role of adventurers on a quest to collect ancient runes protected by dark curses.  In order to break the curses, crystals must be collected and aligned. During game setup, five temple cards are arranged face up in a circle and two wilderness cards are placed in between each pair of temple cards (the picture below shows an alternative arrangement for a 2-player game). A stack of rune cards (4 cards per stack; these cards provide valuable crystal bonuses) are placed face down above each temple card and the top card in each stack is flipped face up. Temple objective cards are laid out; these cards provide additional victory points for breaking temple curses. Each player is given a grid to collect crystals on. 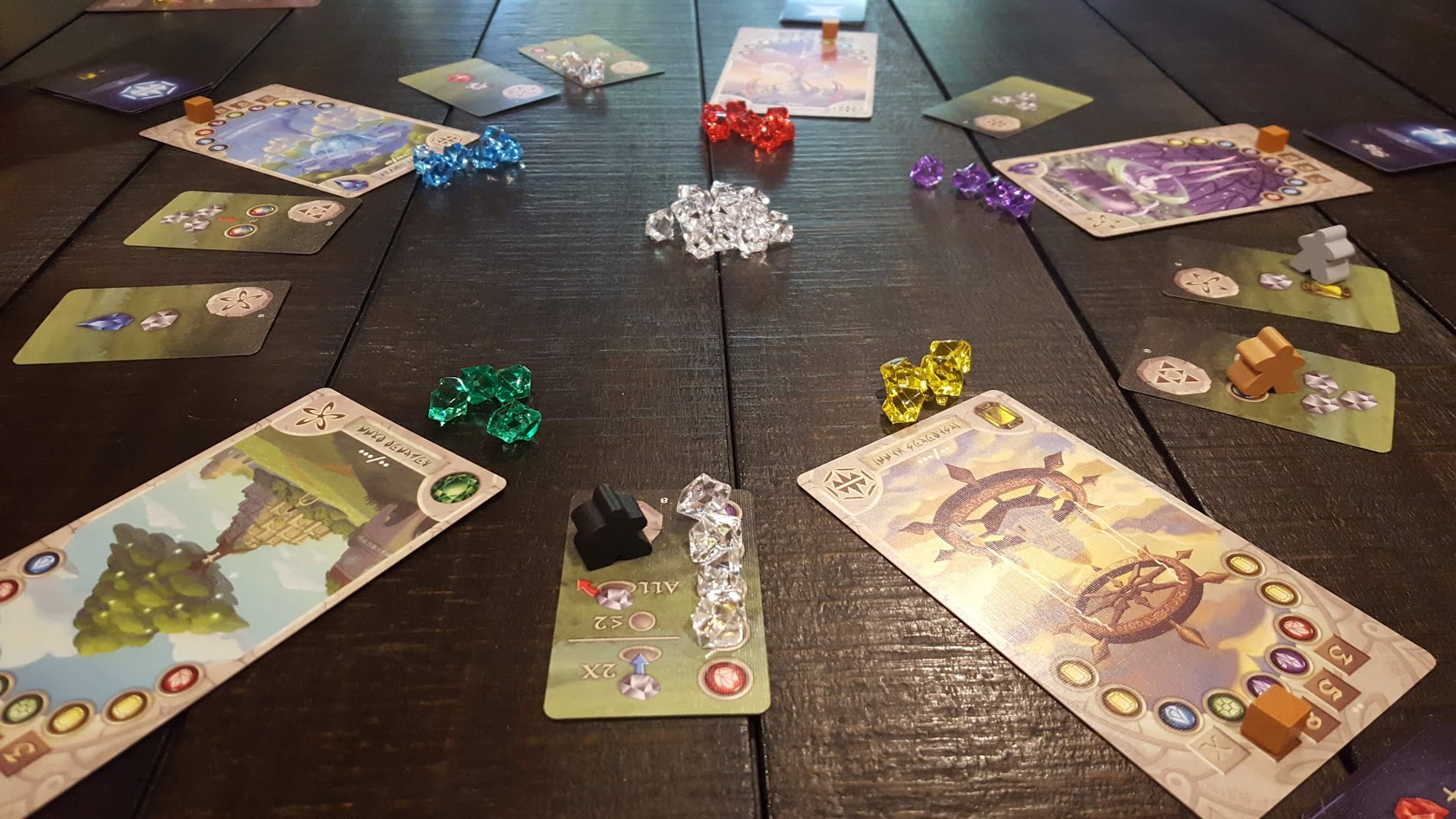 During the game, each player moves their curse breaker meeple clockwise across the temples and wilderness, obeying the detailed rules provided in the rule book. Ending a turn on a wildness card allows a player to collect crystals to carefully arrange on their grid. 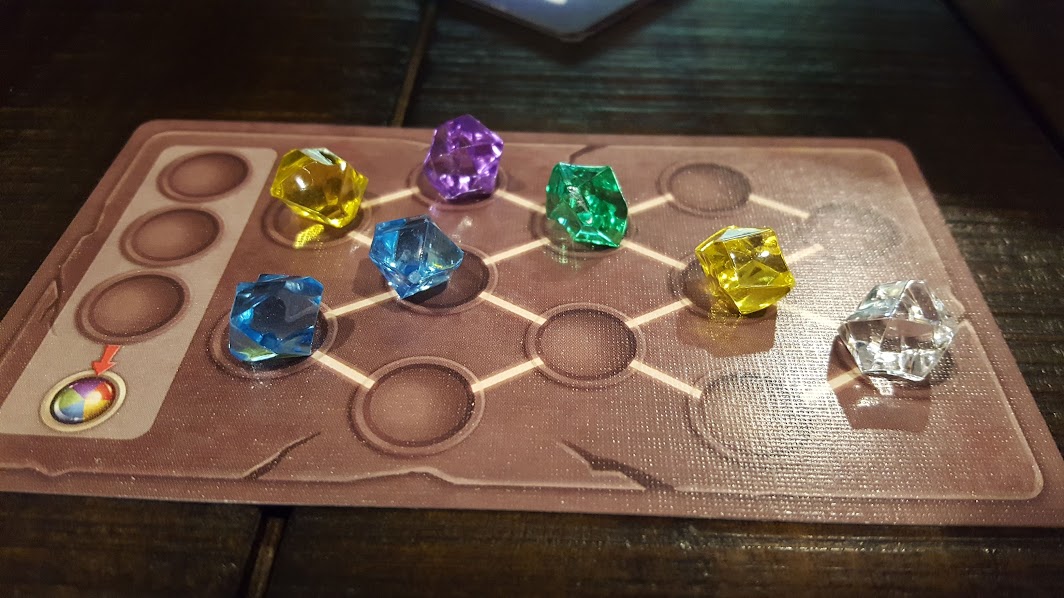 Ending a turn on a temple card allows a player to turn in crystals (which must be connected on their grid sheet in the precise order specified on the temple card) to break a curse and earn victory points. There are multiple strategic decisions to be made during a turn as each wilderness card offers up different crystal gathering opportunities and each temple card provides victory points ranging from 3 to 8, depending on how many crystals a player is able to pattern match and discard. Each of the various crystal combinations on the temple cards can only be claimed once so a player must decide whether to amass the minimum amount of crystals to quickly fill in the lower victory point slots before their opponents can, or work at a slower pace, giving themselves time to collect and arrange longer chains of crystals on their grid sheets that will be worth more victory points.

The game ends at the conclusion of the first round in which a player has broken their fifth curse. Victory points are then tallied and the player with the highest victory point total wins the game. Once players are comfortable with the standard rules of play, they can experiment with the advanced rules, which provide for more complexity and variability in play and scoring. As with most area control games, scaling player counts can be an issue. The designer has addressed this in Mystery of the Temples by providing a 2-player variant that uses extra player markers (to block off temple curse claim spots), less wilderness cards, and an extra player meeple (to occupy random temple and wildness card spaces and block movement to those spaces; the meeple moves after each player’s turn). We found these adjustments allowed for the 2-player game to be just as compelling as with higher player counts.

Replayability is high due to the abstract nature of the game play in Mystery of the Temples. There are no narrative cards to tire of and the unique move combinations that can be sequenced to earn victory points are numerous as the temple and wilderness card layout vary each game. There is a moderate amount of analysis paralysis but it is manageable. Game play lasts around 45 minutes on average.

Game components include beautifully illustrated plastic coated cards (everything Maisherly Chan creates is visually appealing and the card and box cover art here are no exception), cardboard tokens, wooden player markers and meeples, and acrylic crystals. Everything should hold up well under regular use. The crystals are sparkly and fun; I absolutely love them.

While the other Deep Water Games titles didn’t work for me (too frustrating in the depth of analysis required), this one is a keeper. It’s the only one of the three games that hits the conceptual sweet spot for me of challenging but still fun. There is a nice flow to the game; the rhythm of moving my meeple each turn and collecting crystals is pleasant.  Mystery of the Temples provides plenty of intellectual challenge in a small box (this game is not easy by any means) with beautiful artwork and an affordable price point.