This year at GenCon I had the pleasure of meeting the team from Sphere Games as they were providing demonstrations of Mini DiverCity. In this cooperative game, players assume the role of divers attempting to save the diverse ecosystem of a coral reef (DiverCity is a wordplay on diversity) as exploitative corporations attempt to destroy it through actions that either move animals toward extinction or construct hotels that destroy undeveloped island habitat. I came away from the booth with a review copy of the game and the intention to introduce it to my kids (daughter 13, and twin boys both 9).

The husband and I finally had the chance to sit down and play a few games of Mini DiverCity this week with the children. They all had fun with it and the boys are head over heels in love with it. “It’s superfun!”, Max and Locke said. They really loved the idea of saving animals and they liked that you have to turn your hand of cards facing outward so that other players can see them while you cannot.

On each player’s turn they must select one of the three core actions to perform:

One of my sons kept asking each player excitedly, “Are you sure you don’t want to spend your turn action to walkie-talkie me?” He wanted desperately to know what was in his hand and also for his cards to be so useful to the rest of the team that they felt compelled to tell him. I appreciated his enthusiasm and engagement.

The game also includes special diver cards that can be used by the active player to alter the ecosystem in the favor of the animals. Using a diver card does not count as an action, but they are limited in number and each card can only be used once during the game so you’ve got to strategically choose when the best time to use a diver card might be. As always in limited resource games, my husband was averse to using the diver cards until he felt we absolutely needed them to win and I was adamant we should use them as often as possible to keep the edge over the corporations. We compromised somewhere in between and used about half of them during the game. We played using a house rule (a variant on the team rule listed in the rule sheet for beginners) to lay down all the diver cards out on the table for the active player to choose from (vs the standard option where each player is dealt a diver card and only has access to that one).

The instructions for play are presented in an easy-to-follow format in the included fold out rule sheet and didn’t leave us with any unanswered questions.

The artwork is pleasant.

The components are simple – finished cardstock and species tokens. They should stand up to regular use but frequent players may want to sleeve the cards. 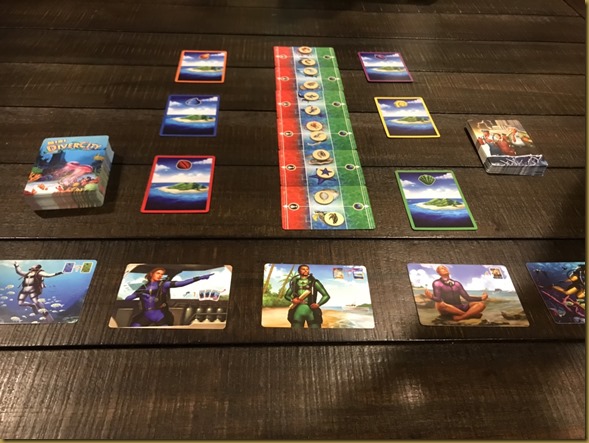 We won the games we played and everyone felt good about it. The boys have already asked me when we can play again. Mini DiverCity is an engaging card game that focuses players on the importance of ecology and is small enough to take with you anywhere to keep the kids entertained on the go. It would make a great stocking stuffer for Christmas and has prompted me to also take a look at DiverCity (the full scale game Mini DiverCity is based on).

Publisher: Sphere Games
Players: 1-7 (We played with 5)
Actual Playing Time (vs the guideline on the box): About 25 minutes
Game type: card game