A few months ago at GenCon I had the pleasure of speaking with the team from Forbidden Games about their recent release of Railroad Rivals. After taking a cursory look at the game, I came away with a copy of it and a bit of excitement about getting on the table.

There are two different editions of Railroad Rivals available on the 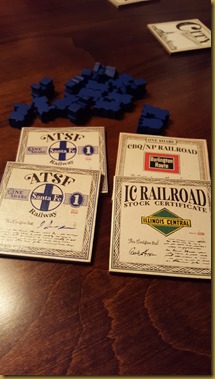 Forbidden Games website – the standard edition (which is what I brought home) and the platinum edition. The latter features upgraded wooden tiles and components which are lovely to hold in hand, but even in the standard edition, the component quality overall is very high. I found some minor issues with my copy (a locomotive or two was not sized the same as the rest in the supply and one of the railroad stock counter tokens was missing) but the publisher took care of the problem quickly after I contacted customer service. The sturdiness and beauty of the components in the game is a reflection of the improvements in craftsmanship among board game manufacturers based in Asia.

The artwork featured in Railroad Rivals is clean and tailored and suits the theme well.

At a recent game night, I suggested we give Railroad Rivals a try and gathered together 4 other interested players. We opened the game and dug into the rule book. It’s easy to follow and features a detailed breakdown of each phase in a turn, which is very helpful. What would be even more helpful would be for the publisher to include player aid cards for each player listing the phases and key details so that we don’t have to keep passing around the rule book. This isn’t an omission exclusive to Forbidden Games; many publishers overlook this player friendly offering.

We really enjoyed the game. The bidding of victory points for turn order mechanism employed in Railroad Rivals isn’t something I’ve encountered before and it was an interesting logical puzzle to consider. Should I be willing to give up victory points to go first? When is it worth it and when should you keep your place in line? I was last in line initially and could never stomach paying the high prices our bidding would raise so I remained last in line for all key actions the entire game. That definitely put me at a disadvantage and I lost the game. But so did 3 other players, all of whom paid the steep prices at least once to shift to first place. I’m looking forward to getting some guidance from my husband (PhD in statistics; he did not join in the initial game) on optimum strategy for the bidding phase. 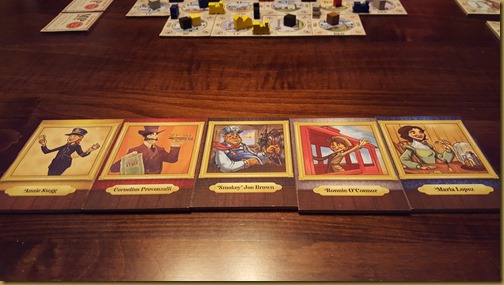 Pictured: Player positions after a round of bidding first to last, from left to right.

After bidding for position, players take turns selecting (based on player position) railroad stock tiles to add to their portfolio and city tiles to add to their hand. Next, everyone takes turns (based again on player position) on laying down a new city tile, domino style, to expand the current rail network. Each tile laid down is secured to the existing network with the player’s railroad token and is stocked with the number of goods specified on the card (goods are pulled randomly out of a velvet grab bag). The last phase of the turn consists of delivering goods from one tile to another across a railroad link, rewarding the active player, the player who owns the railroad link used (as long as it isn’t the active player), and the stockholders of the railroad used. 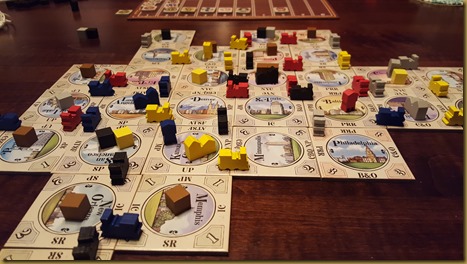 Railroad Rivals is subject to moderate analysis paralysis. The number of tiles to choose from during the drafting phase is equal to twice the number of players; there are typically several locations to connect tiles during the placement phase; and there are a handful of options for which goods to deliver during the delivery phase. All of these decision points can be a source of delay when an overly analytical player (like myself) is at the table. Know your opponents and their propensity to overanalyze, plan your time allotted for the game accordingly, and use any delays on their turns to plot out your play options.

I’m looking forward to playing Railroad Rivals again at different player counts and with different groups of gamers in my community. It’s going to take several games to hone a well-crafted strategy for turn order bidding, tile placement, and delivery choices; it’s a logic puzzle of sorts that will be fun to piece together.