A few months ago, the good folks at Baba Geek Games sent me a review copy of their cooperative storytelling game Robit Riddle. Our kids (we have a 13 year old daughter and two 9 year old twin boys) love the storytelling game Legacy of Dragonholt, so I had high hopes that they would similarly enjoy this game.

Robit Riddle offers three different storybooks in the base package, allowing players to immerse themselves in a colorfully illustrated fantasy world wherein they are robots searching for their missing pets (called robits) that have gone missing under suspicious circumstances. Players begin the game by choosing a robot character and taking turns telling the rest of the team about their character. We had a lot of fun with this aspect of the game, each of us employing special voices to distinguish our characters from other robots.

The story begins by opening the storybook to the first page. Players are presented with multiple paths forward in a choose-your-own-adventure manner at important story junctures and most paths will include a skills test that must be passed with a certain number of successes to continue along that path. Players should evaluate the strength of their character’s skills against those required for the different paths before making a decision on which way to go. Dice are used for attempting skill tests and the strength of a player’s skill equates to how many dice they are allowed to roll for the test. The possible outcomes of every die roll are success, miss, or gain a story token. Story tokens are accumulated and shared among all players and are used to improve the odds of passing a future skill test by adding an automatic success to the test for each story token used. To use a story token, a player must choose one of their story cues (story cues are handed out at the beginning of the game and also accumulated along the way) and use it as a prompt to explain, through storytelling, how they contributed to the success of the test. For example, if the skill test is one of physical strength, they might tell a story of how they used their robot arms to lift up a heavy item and found something important hidden underneath that allowed them to successfully complete the task. Our kids stumbled quite a bit with this aspect of the game. I realized that in all the other games we have played, including Legacy of Dragonholt, they have never been required to creatively tell their own stories. What other games bill as storytelling is really the game designer allowing you to shape the narrative by making choices that take the story in different directions. That is very different from players adding to the narrative through freeform storytelling as Robit Riddle allows for. We’ve played Robit Riddle as a family three or four times so far, and each time, the kids are a bit reluctant - holding back and clamming up - when it comes to using story cues to add successes. It feels very foreign to them in the context of a family game, even though they are quite creative outside of board game settings.

As the story unfolds, locations, adversaries, allies, and items are encountered in the game which present twists, conflicts, opportunities, and new story cues that can be used if story tokens are available.

Because each story book offers several story paths and there are multiple story books, families should be able to squeeze out plenty of replays from the core game. And of course, since personal storytelling is an integral part of every game, each replay is guaranteed to be unique.

The instructions for play are presented in an easy-to-follow format in the included 8 page rule book and didn’t leave us with any unanswered questions.

The artwork is futuristic and cutesy all at once, and the illustrations on the location and other encounter cards are in full color. It would have been nice if the designers upgraded the black and white illustrations in the storybooks to full color prints as well but it’s a minor criticism.

The components include the paper storybooks, lightweight cardstock encounter cards and story cue cards, dice, and the most adorable little metal gears (used as story tokens) I have ever seen. All of the cards are a bit thin but should hold up over the life of the game if all players are careful with them. This is not a game I’d let children under 8 play with by themselves, for fear they might rip or otherwise deface the cards. 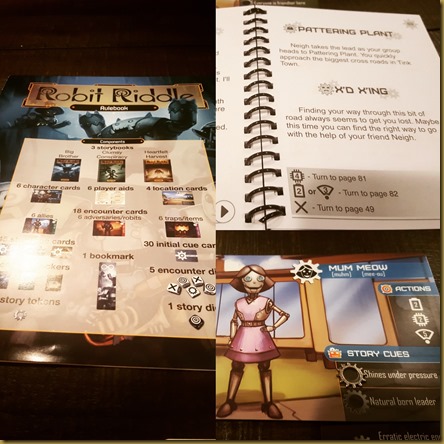 Even though my kids struggled a bit with the additive storytelling nature of this game, Robit Riddle is still a game I’d highly recommend buying if you have children and it should play well for kids 6 and up. It’s especially strong as a bridge between ordinary board games and traditional RPGs. Creativity is a mental muscle and flexing it through storytelling is an important exercise to keep the mind limber and adaptive.