This year at GenCon, my husband Chris was in charge of scouting out potentially excellent games to play in the demo hall. He signed us up for a session of Spy Club and explained it to me like this: “Remember how awesome Encyclopedia Brown books were when we were kids?" This game is like that and you get to be the kid detective!” . It sounded intriguing so one afternoon we found ourselves sitting at a table in the demo hall with the designer of Spy Club, Randy Hoyt. He ran through the game rules with us and then we played a few games. We had signed up to play a full campaign (five individual games, chained together, unraveling a bit of storyline with each play) but I actually stopped the play halfway through because I was so enamored with the game that I wanted to avoid any potential spoilers and save the experience to be savored with our kids (daughter 13, and twin sons, 9). I came away from the demo with the game in hand, excited to play once we got home. 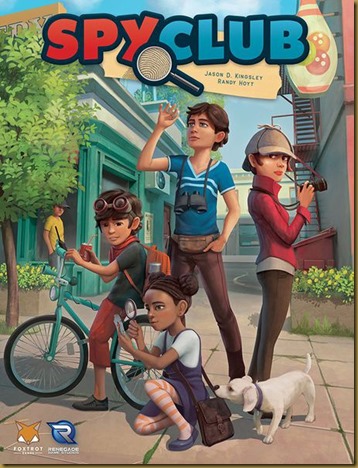 Spy Club is a cooperative set collection game that can be played in campaign mode as mentioned above or as a standalone game. Each game aims to solve a case, and each case is composed of 5 aspects – the crime, the motive, the suspect, the location, and the object the crime is centered on. Once all aspects of the case are solved, you’ve won the game, provided you finished before your ideas or clues ran out, the suspect escaped, or time ran out because you couldn’t draw a movement card for the suspect.

The artwork featured in Spy Club is cutesy and playful, featuring vivid colors and well defined illustrations that play on the kid detective theme. It’s definitely geared toward toward the under 16 set but still inviting to adults. And it absolutely evokes the Encyclopedia Brown aesthetic as my husband remarked (which is a good thing for those who appreciate nostalgia).

Components include oversized cards, a card tray, interlocking player boards, cardboard tokens for ideas (the game’s currency) and focus, wooden tokens for the suspect and escape marker, and a central board to track aspects of the crime and suspect movements. There are also a variety of special components designed to be used when playing in campaign mode. All of the components are sturdy enough to hold up to typical use, although I’d suggesting putting the cards in sleeves for frequent play.

Game play moves at a good pace in Spy Club and is not typically subject to analysis paralysis. On each player’s turn, they may choose up to three of the four standard actions (flipping the two-sided clue cards on their player board to see what is on the back, submitting a clue card to the central board, moving focus tokens around on their player board to gain new idea tokens, and drawing a new clue card from one of the incoming clue slots). Some of these actions must be paid for with idea tokens. Players may also complete any number of free “bonus” actions on their turn. The bonus actions all involve interacting with other players to complete tasks like trading cards, sharing idea tokens, etc., and do not cost idea tokens. All actions are simple enough for children to understand but provide enough strategy options to keep adults engaged. 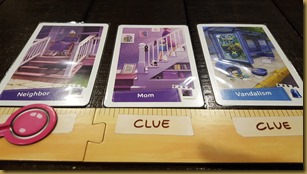 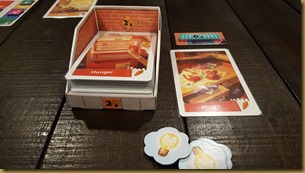 The various actions permitted in the game should be interplayed skillfully to achieve the team’s strategic goal of confirming crime aspects by repeatedly collecting five cards of one color to the central board. Each time the team has gathered five cards to the board, one aspect of the crime is solved (A symbol on the current suspect card identifies which aspect of the crime has been solved). After each player’s turn is complete, they refill their player board with clue cards, refill incoming clue slots from the clue deck, reveal the next suspect card, move the escape marker 1 space on the escape tracker (only if there is an escape icon on the revealed card), and then move the suspect token across player boards the number of spaces indicated on the suspect card. When the suspect token completes its movement in this way, whichever clue card it stops at will correspond in color to a penalty as indicated on the central board. This is a very clever pushback mechanism against the players to keep everyone on their toes.The penalty is assessed and then the next player begins their turn.

I really enjoy playing Spy Club, and I especially enjoy playing it with our kids. Cooperative games are always a good choice for families, especially families with elementary school kids who haven’t developed the frustration tolerance to deal with competitive games and the threat of losing to other players. That aspect of the game, combined with its pleasing artwork and easy-to-learn-&-fun-to-play nature, pushes Spy Club toward the top of my list for family games. And the cherry on top? Spy Club has introduced my kids to the concept of board game campaigns.

I cannot recommend Spy Club highly enough. Go and get this games and let it be one of the special ones under the tree this year.

Publisher: Renegade Games (Developed by Foxtrot Games)
Players: 2-4 (We played with 3 and 4)
Actual Playing Time (vs the guideline on the box): About 30 minutes per game
Game type: cooperative, set collection