Board Game Review: My Little Scythe

In the beginning of September I had the chance to play Scythe (another release from Stonemaier Games) with a group of friends for the first time and fell head over heels for it. My husband and I play board games together at least a few times a week and we also get together with our friends for regular game nights as well, so finding a challenging and engrossing game such as Scythe to add to our collection is wonderful. But we also have three children (a daughter 13, and twin boys, 9) and we love to play games with them too, so we were especially happy to discover that a father-daughter team (Hoby and Vienna Chou) had taken the mechanisms behind Scythe and translated them into a more kid-friendly version called My Little Scythe. I thought it would probably be a great fit for our family.

A few weeks ago a new box arrived to our home and inside was My Little Scythe. We gathered the boys around our gaming table one Saturday afternoon shortly thereafter and sat down to play (our daughter was at a Girl Scout event). The kids got excited as we laid out the components. The board is so colorful and the minis are super cute! Setup was a breeze (other than the kids fighting over who gets to be what color) and we passed around the rule book as we explained the rules to everyone. The instructions for play are presented in an easy-to-follow format and didn’t leave us with any unanswered questions. 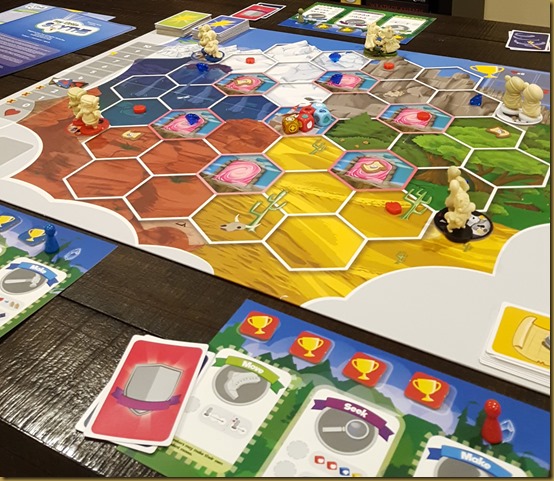 Game play in My Little Scythe is straightforward – players spend their time accomplishing tasks to earn trophies. There are eight different ways to earn a trophy and only one involves player vs player combat. Since you only need four trophies to win the game, it’s completely possible to avoid direct combat and still win. That makes My Little Scythe a great option for families wanting to introduce their kids to competitive games without bringing on emotional meltdowns. When kids are ready for a bit of combat, but still want to avoid attacking friends and family, the automountie can be introduced as a punching bag. This is an artificial opponent that will have a presence on the board like all other players and will perform actions on its turn according to a preset script presented on automountie cards drawn from the automountie deck. The automountie also allows the game to be played in cooperative mode – with all the humans on one team facing off against a team of automounties.  After completing our family game of My Little Scythe (which I won – woohoo!), I employed the automountie for it’s third use – as my opponent in a solo game. I played on “Normal” difficulty level and lost. 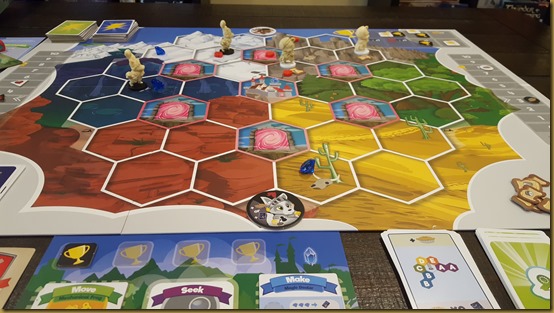 My Little Scythe consistently held the boys’ interest throughout our game and the 13 year old would most assuredly enjoy playing it as well if she wasn’t so busy with school, sports, and music lessons that keep her from playing with us as much as she’d like. For adults who are fans of more complex games with deep analytical thinking demands (such as the original Scythe) playing My Little Scythe against children may feel a bit dull. But the automountie proves to be a consistently rational opponent holding advantages over other players and I’m guessing that playing against other adults would elevate the game play experience as well.

One thing I really like about My Little Scythe is that the designers have included achievement sheets for players to track different kids of victories over time. On it, you can mark down the name of the player who was first to win at every player count, or the first in each age bracket to finish the game with 4 trophies. It gives kids a chance to consider and remember their successes. I wish every game we owned came with a sheet for recording victories; it’s a great way to record the shared experience.

This is a game I’d recommend buying if you have children or if you host other people’s children in your home from time to time. It makes a great game to leave out for children to play while you and your friends play more adult oriented games. And then, once you own it, you can take advantage of it being in your house and play in solo mode.

Publisher: Stonemaier
Players: 1-6 (We played with 4 and also in solo mode)
Actual Playing Time (vs the guideline on the box): About 60 minutes
Game type: area control, pick-up and deliver