Board Game Review: All Manor of Evil

I received a preview copy of All Manor of Evil from Kolossal Games a couple of weeks ago just in time for the Kickstarter launch. FYI, Kickstarter campaign page is HERE.

While the artwork is still in development, everything printed in the preview copy is beautiful. Kolossal has high production standards and I’m certain the finished copy of AMOE will delight. 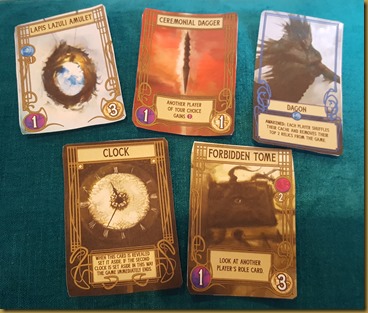 Let’s dig into the game play. As with many games set in the Lovecraft universe, in AMOE, we try to minimize the steps toward insanity our characters take as they go about their activities. Under the baseline rules, the player who accumulates the most madness is devoured and eliminated at the end of the game before scoring. Not pleasant! The game is played in successive rounds, during which all players simultaneously select an action using the actions cards, and carry it out. These actions include improving sanity, stealing relic cards from the draw deck, or interacting with the rooms of the manor and the relic cards assigned to those rooms. Additionally, all action cards mandate a secondary action of stealing a relic card from one of the rooms in the manor to add to one’s personal cache (which is evaluated at the end of the game). Relic cards have a value associated with them in dollars and many also have a cost associated in terms of increased madness and/or pushing one of the Gods a step closer to awakening. These Gods add a layer of variability and complexity to AMOE - a subset of the Gods are put in play at the beginning of the game, each one changing a rule should it be activated through awakening (some rules affect scoring, others affect end game rules such conditions for being devoured; Gods are awakened when they have accumulated enough awakening tokens). More complexity is provided through roles that are assigned to players.  These roles change the standard rules in ways that can usually be leveraged to gain an advantage over opponents. For a seemingly simple card game, All Manor of Evil has a great amount of depth and opportunities for strategic play.

After the first round of play, AMOE is not subject to much analysis paralysis (AP) as only three of the four action cards that come in the box are available for selection (you cannot repeat your previous action) and the relic cards showing in the manor and in your hand tend to suggest definitive strategies. I was able to progress through my turns quickly and I am the queen of AP. We finished each game in 30-35 minutes. Repeat games sustain interest as the variety of Gods and roles offer a different play experience each time. 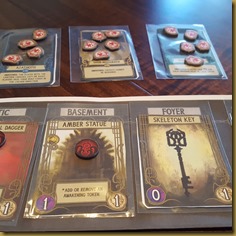 The rulebook is still in draft as of this date, but the copy I reviewed explained the rules and game play well and did not leave me with any unanswered questions related to how to play the game.

Components for All Manor of Evil include cards, madness tokens, awakening tokens, and a first player token. Note that the madness and awakening tokens visible in my photos are not the standard ones from the game; for my preview copy I used alternative tokens.

I’m in love with all things Cthulhu so even before I ever read any details on how AMOE is played, I was excited about getting it on the table. As I’ve said many times before, I am usually drawn into games initially based on themes. Come for the theme, stay for the game play. And the game play here did not disappoint. Kolossal Games has done a great job with this release and I’m happy to add All Manor of Evil to my collection. You’ve still got time to add it to your collection too, if you mosey on over to the Kickstarter page and back AMOE before the campaign ends later this month.

Publisher: Kolossal Games
Players: 1-6 (We played with 2 and I also played a solo game)
Actual Playing Time (vs the guideline on the box): About 30-35 minutes per game
Game type: card drafting, set collection
Rating: 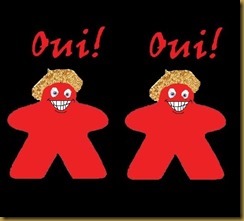